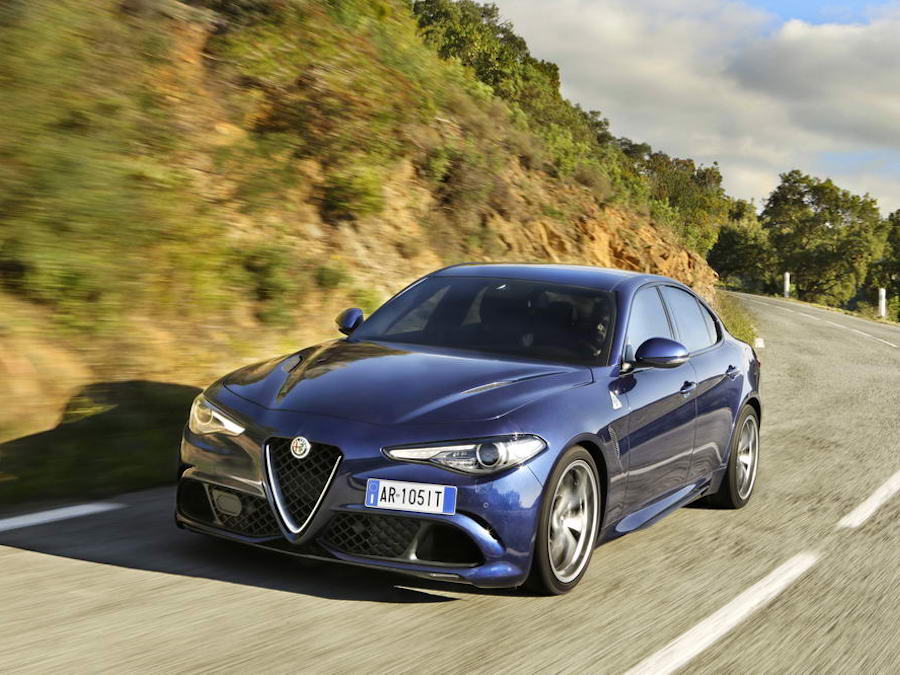 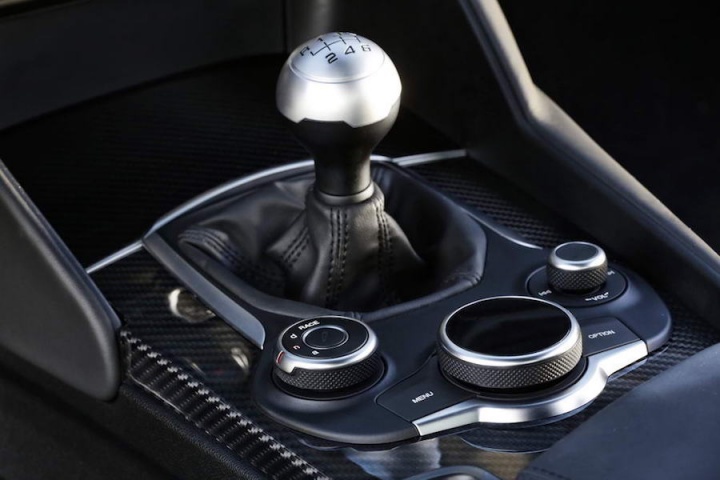 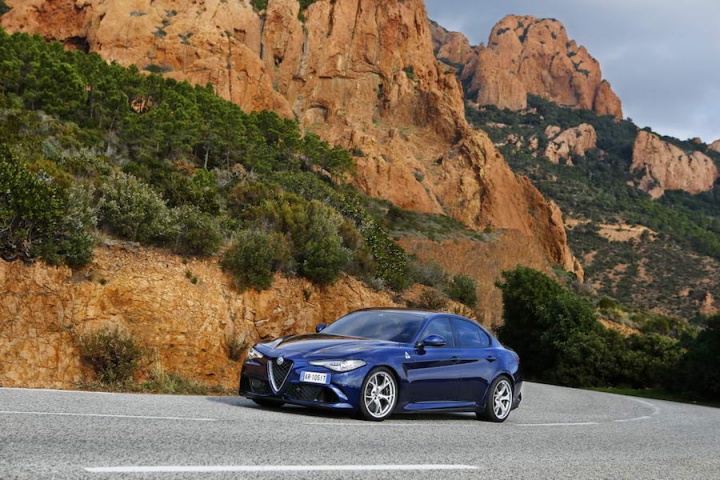 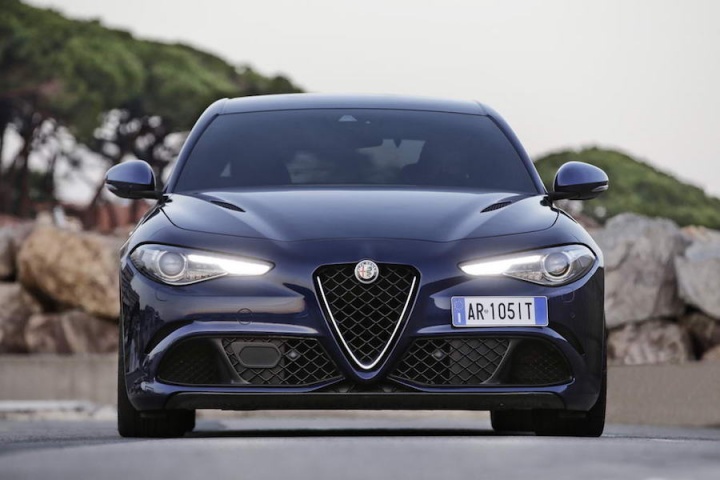 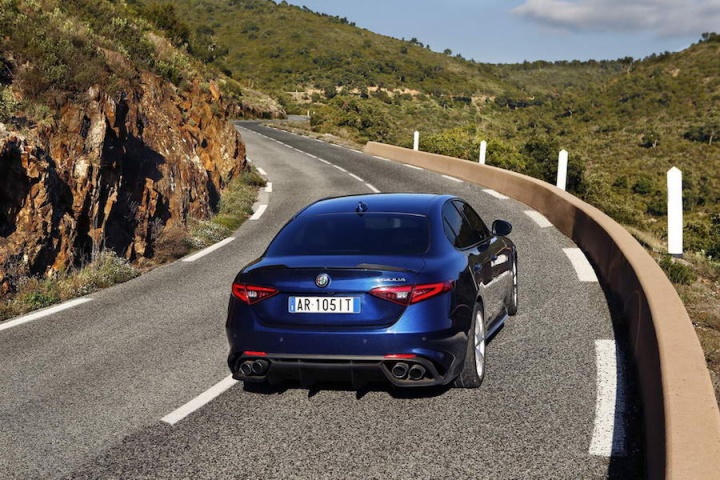 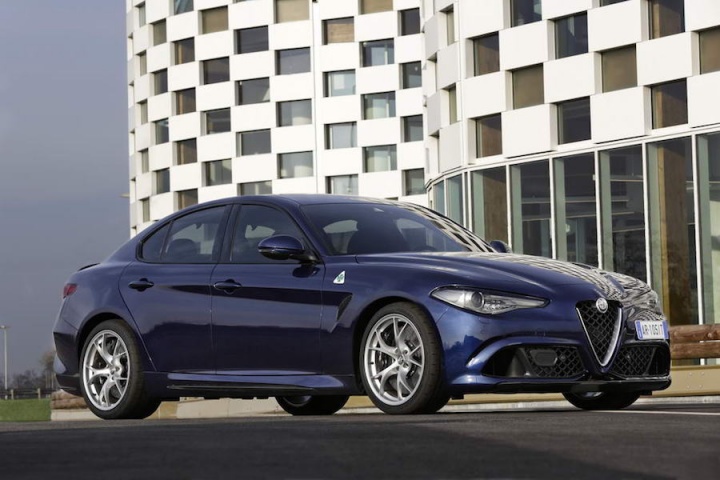 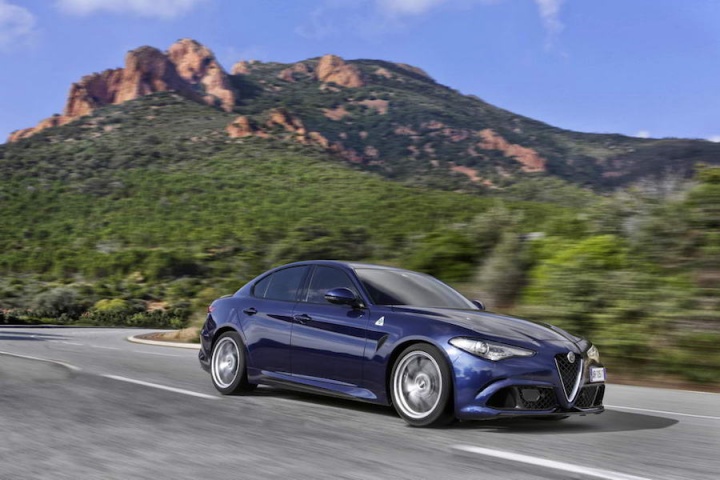 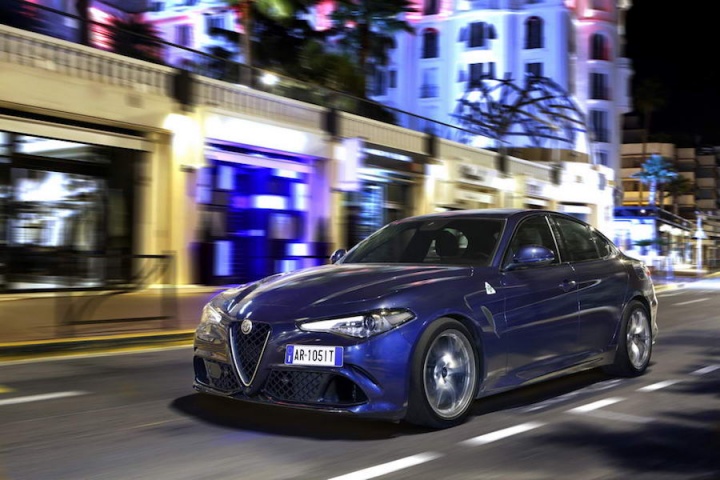 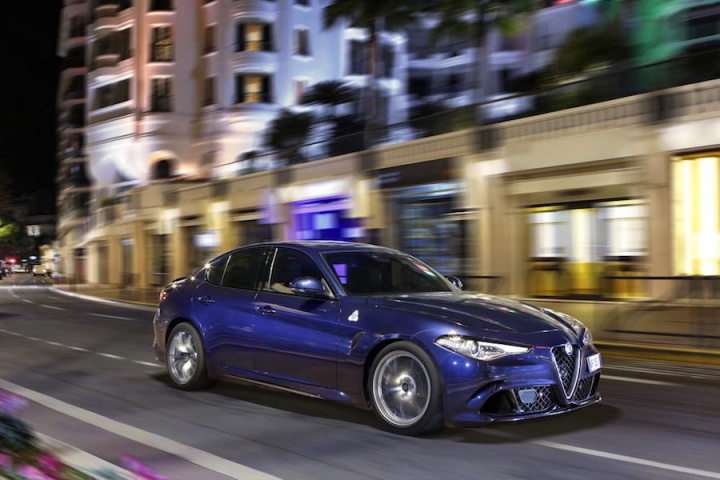 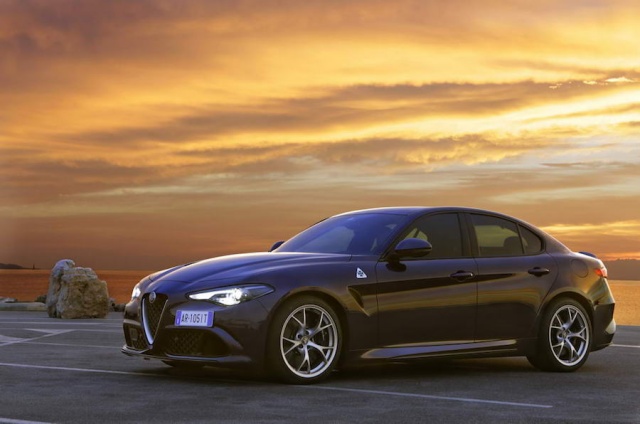 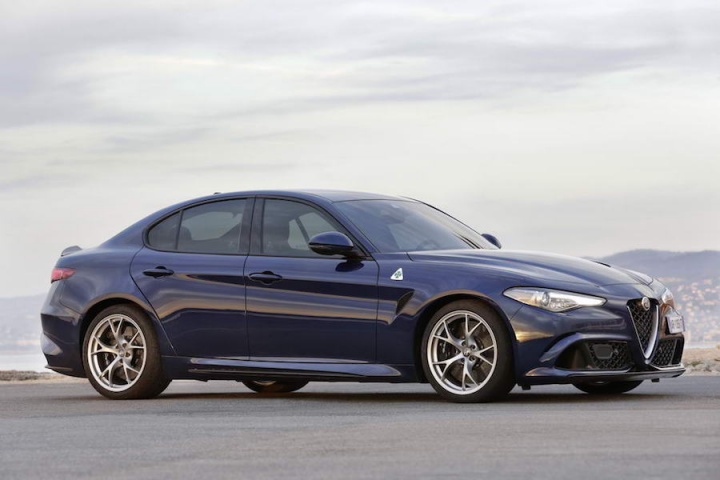 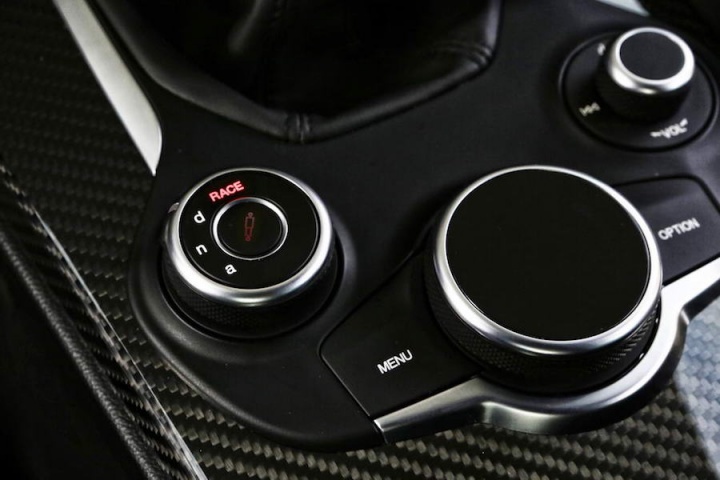 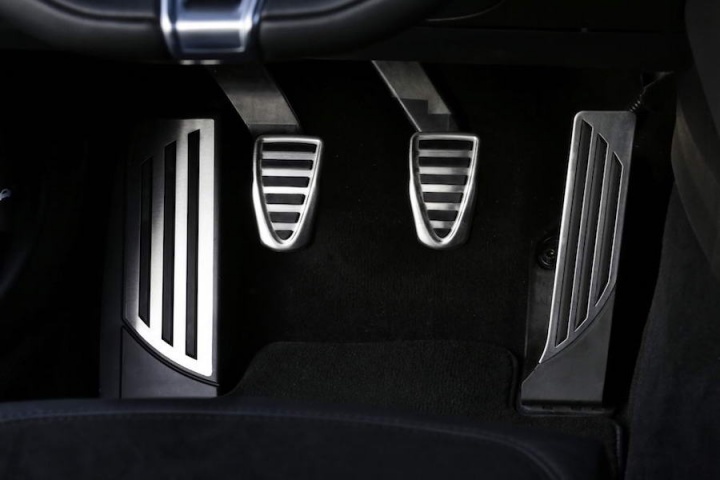 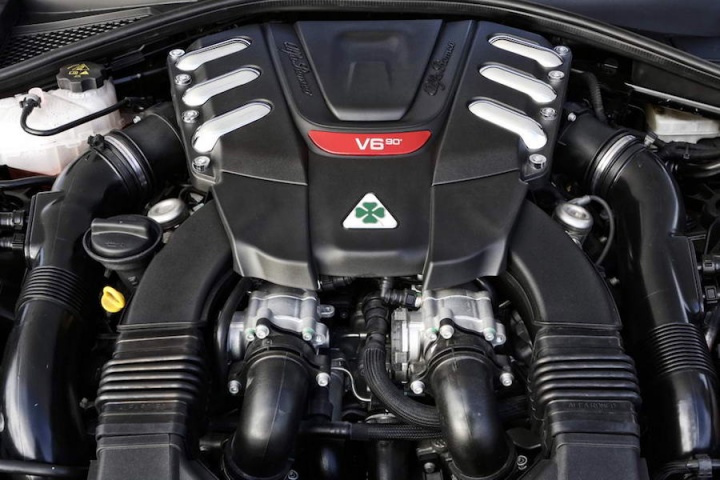 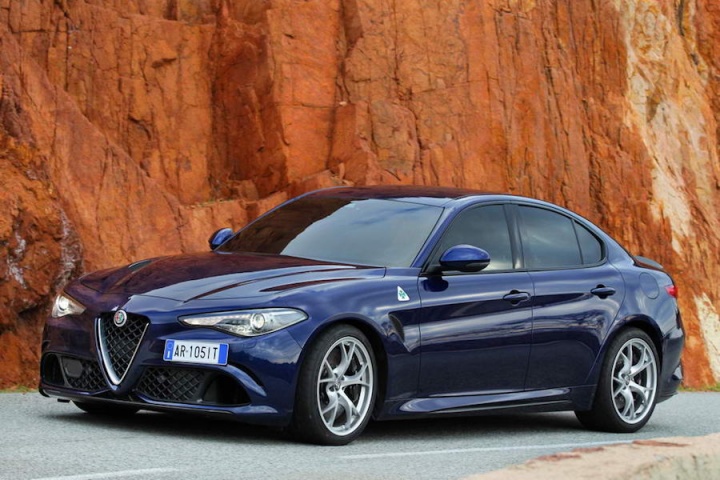 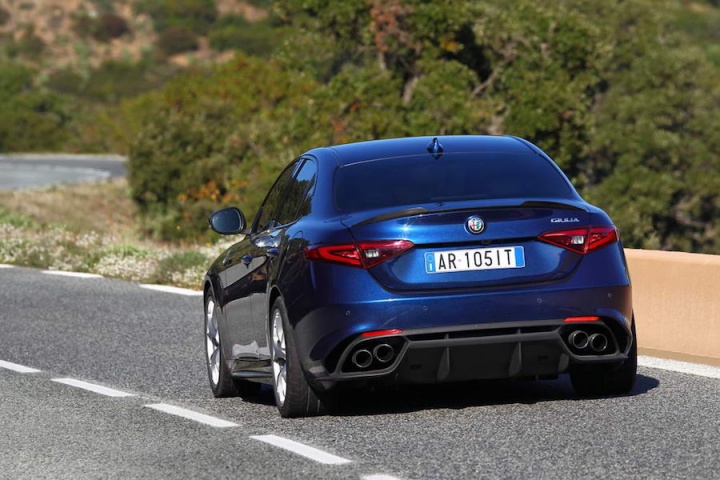 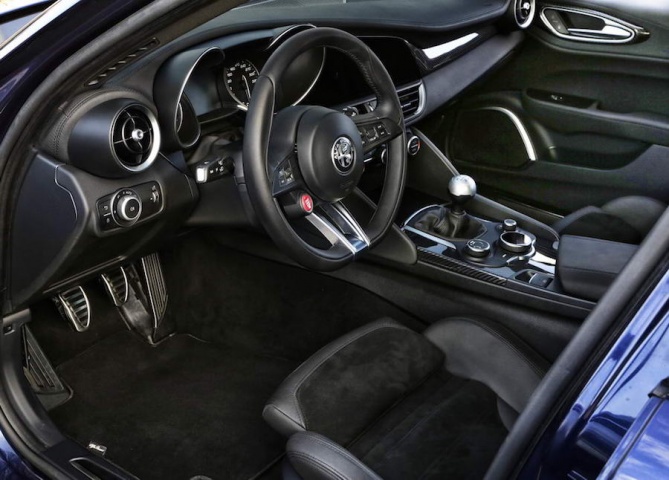 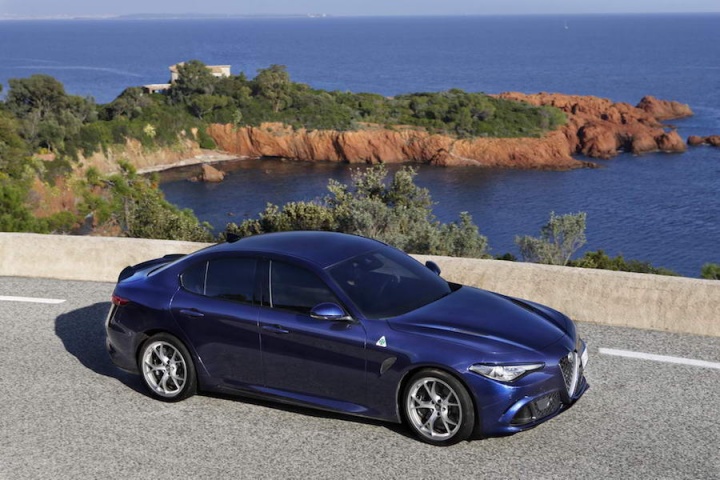 If the rebirth of Alfa Romeo as a credible premium brand has been confirmed by the excellent regular versions of the all-new Giulia saloon, then this scorching Quadrifoglio model only hammers home the point that the company has enacted a thoroughly remarkable turnaround. Watch out BMW M3, Mercedes-AMG C 63 S and Audi RS 4 - there's a new contender in town and it's brimming with Italian brio.

Coating the exterior of the pretty Alfa Romeo Giulia in all the traditional supersaloon garments hasn't spoiled the look of this four-door. In fact, it makes it even more appealing, because Alfa has exercised restraint and thus struck a perfect balance between muscularity and grace. Externally, the car has an aerodynamic body kit, gorgeous 19-inch 'teledial' (that won't mean anything to the smartphone generation...) alloys and a set of quad exhaust pipes, with the choice of two Quadrifoglio-specific colours on top of the regular palette: Competizione Red and Trofeo White. Inside, leather and Alcantara sports seats, a sports steering wheel and carbon trim add an extra frisson of excitement, while a speedo that reads to 330km/h and beyond builds more anticipation. Keen-eyed types won't fail to notice that the DNA drive profile switch of the Quadrifoglio features an extra 'Race' setting and also a button for damper control, both of which speak of its hidden-from-view chassis tech.

Like the standard Giulias, the Quadrifoglio has a carbon propshaft and aluminium is employed for the engine, suspension, brakes, doors and wheel arches. Further weight-saving is carried out on the hot Alfa via more carbon fibre, with the alloy bonnet on the regular car now switching to the lighter material here, while the roof, front splitter, rear diffuser and spoiler, along with those inserts in the side skirts, are made of the same stuff. Specify optional carbon ceramic brakes and carbon Sparco seats, and even more kilos are shed from the Giulia's frame. All the above leaves the 'standard' Quadrifoglio standing at 1,524kg, although that's a dry weight and so with fluids and a driver on board, it'll be more in the 1,650kg ballpark, which is still competitively trim.

A quick note on the name. Quadrifoglio is Alfa's historic performance brand and is the Italian for 'Cloverleaf', but until recently the company referred to the colour of the badge too, with the full title being Quadrifoglio Verde, often abbreviated to QV. Maybe CEO Harald J Wester is determined to sever all links with recent, mediocre product, but Alfa at no point explicitly referred to this quick Giulia as a QV... despite the fact the same green badge can be seen on the car's front wings and in the press bumf it was listed as a QV in pictures. So call it a QV if you want. Although perhaps not in front of Mr Wester.

The same double-wishbone front suspension and multilink rear axle as used on regular Giulias can be found on the 'Cloverleaf', with some additional hardware to let the big Alfa corral its 510hp/600Nm firepower. First up is Torque Vectoring, which sees a double-clutch integrated into the rear diff to split engine torque from one side to the other as required. Second is DNA Pro, a step up from the DNA drive-mode select in any other Giulia. As well as Dynamic, Natural and Advanced Efficiency settings, the Quadrifoglio has a Race function that turns up the noise and throttle response and simultaneously switches all the electronic aids on the car off; one Alfa test driver did tell us that certain pressure on the brake pedal would flick the safety nets back into place, although we never found that point on the circuit. What we did discover, though, is that moderately heavy braking saw the car automatically flash its hazards as a safety device, which is a feature that will thoroughly annoy track-day addicts and spirited road drivers if it can't be switched off.

Anyway, back to the good stuff. That carbon front splitter is active aero, as it extends at higher speeds to increase downforce on the Giulia's nose. Alfa Chassis Domain Control (CDC) looks after the DNA Pro settings, Torque Vectoring, the Active Aero Splitter, the active suspension and the ESC stability control, monitoring the whole kit and caboodle all the time to make necessary adjustments. The Integrated Brake System (given the unfortunate initials of IBS) ensures the Quadrifoglio on regular discs can come to a standstill from 100km/h in just 32 metres, 6.5 metres shy of the normal Giulia's stopping power. And the marvellous 3.0-litre V6 biturbo engine has, like the chassis, been developed by former Ferrari engineers seconded to Alfa and is reputed to be making its way into an actual Ferrari model in the near future. It drives the rear wheels through the same eight-speed ZF automatic, albeit with different software mapping, as found in all other right-hand drive Giulias.

We didn't get a huge amount of time behind the wheel of the Quadrifoglio and what precious moments we did enjoy there were spent entirely on the Alfa test track at Balocco in northern Italy. However, it proved to be a very useful experience. We first went out as a passenger in absolutely atrocious, wet conditions with an Alfa test driver at the wheel. First impressions were not great. It didn't sound jaw-dropping, it didn't feel anything like 510hp-fast and the Italian driver, remaining in Dynamic mode with some electronic help, seemed to be grappling with extreme traction/grip issues on the way into, through and out of corners.

The weather started to sort its act out and so we were given two laps behind the wheel ourselves, first with an Alfa bod in the passenger seat and then entirely on our own. We began in a six-speed manual example and it wasn't much better. OK, the drying track now allowed the Alfa to get a hold of the tarmac and make some decent progress, but again the engine felt unwilling to rev, the six-speed manual was clunky (despite a clever 'flat-upshift' feature in Race mode and rev-matching on the way down the gearbox) - mainly due to the comically-sized gear knob Alfa has foisted on it, and there still weren't the sort of zingy noises we'd expect of an Alfa V6. More teeth-grinding frustration.

It wasn't until Balocco had properly dehumidified in weak afternoon sunshine that we managed to get into a fully-fuelled automatic. And it was a revelation. With no Alfa person in tow, we took the Giulia Quadrifoglio by the scruff of the neck and it proved a total delight - better resolved than a BMW M3, more involving than the outgoing Audi RS 4... perhaps not at Mercedes-AMG C 63 S levels of excellence, granted, but close enough for us to be utterly gobsmacked by what Alfa has achieved from, effectively, Supersaloon Ground Zero.

It can flick-flack through 160km/h+ direction changes without feeling like it is going to pirouette off into oblivion. The super-sharp steering, perhaps lacking feel and needing a little more finesse, nevertheless allows you to pin the nose of the Alfa to the apex at will and the set-up is clear enough to make winding lock off on corner exit an exercise in accuracy. The eight-speed gearbox has closer-spaced ratios that allow the fizzing V6 to come alive, although for our money it could rev a little higher than it does; nevertheless, with those stunning big metal paddle shifts and rapier responses, the ZF transmission turns the Quadrifoglio into a truly demented performance saloon that hauls in 200km/h with near-reckless abandon. The soundtrack is distinctive - a little bass-rich at times, perhaps more interesting for those outside the car than people within, but certainly up on the M3 and possessing enough of an Alfa voice that we can heartily commend it. And the accelerator is so crisp that throttle-steering the rear-drive Giulia is a piece of cake. A feeling of genuine, euphoric bliss sweeps over us - here is a brutally fast, dynamically polished Alfa Romeo sports saloon in the finest traditions of the marque that is going to be able to take on some of the very best performance cars in the game. It's about bloody time, too.

At the time of writing, we don't have Irish prices for the Quadrifoglio, but with the BMW 3 Series constantly mentioned as the value barometer, assuming the 510hp Giulia will cost around the €100,000 ticket of an M3 seems sensible. For that, you get what appears to be a beautifully sorted supersaloon that looks sensational and goes like the clappers, so whether there are pricey options or not, it should prove to be a reasonable purchase provided the residual values withstand scrutiny.

BMW M3: less spiky as a saloon than it is as an M4 Coupé, the M3 is no longer the benchmark in this class - it's too wayward. Costs around €100,000, which is where the Alfa is expected to be.

Jaguar XE S: as yet, Jaguar hasn't announced an 'R' version of its compact XE saloon, so this 340hp supercharged S is as hot as it gets. Nothing like as quick as the Cloverleaf, but still a belting thing to drive.

Mercedes-AMG C 63 S: around €108,000 and with the same 510hp output, it's actually this exceptionally brilliant Merc that the Alfa has to beat, not the M3.

Limited track time can only tell you so much about a car, but the early signs for the Alfa Romeo Giulia Quadrifoglio are hugely promising. What we're not convinced about are the following: from the passenger seat, it felt extraordinarily twitchy in sopping wet conditions, even with traction control engaged; the sound of it veers from raucous and superb one moment to synthetic and muted the next; and we have no idea how it will perform away from the flattering confines of the circuit. Nevertheless, masses of grip, a playful rear-drive chassis, fine steering and iron-fisted body control are already clearly part of the Quadrifoglio's repertoire and so the Alfa looks eminently capable of tilting at the German supersaloon establishment. Can there be any higher validation for this marque's long-awaited, successful revival than that?