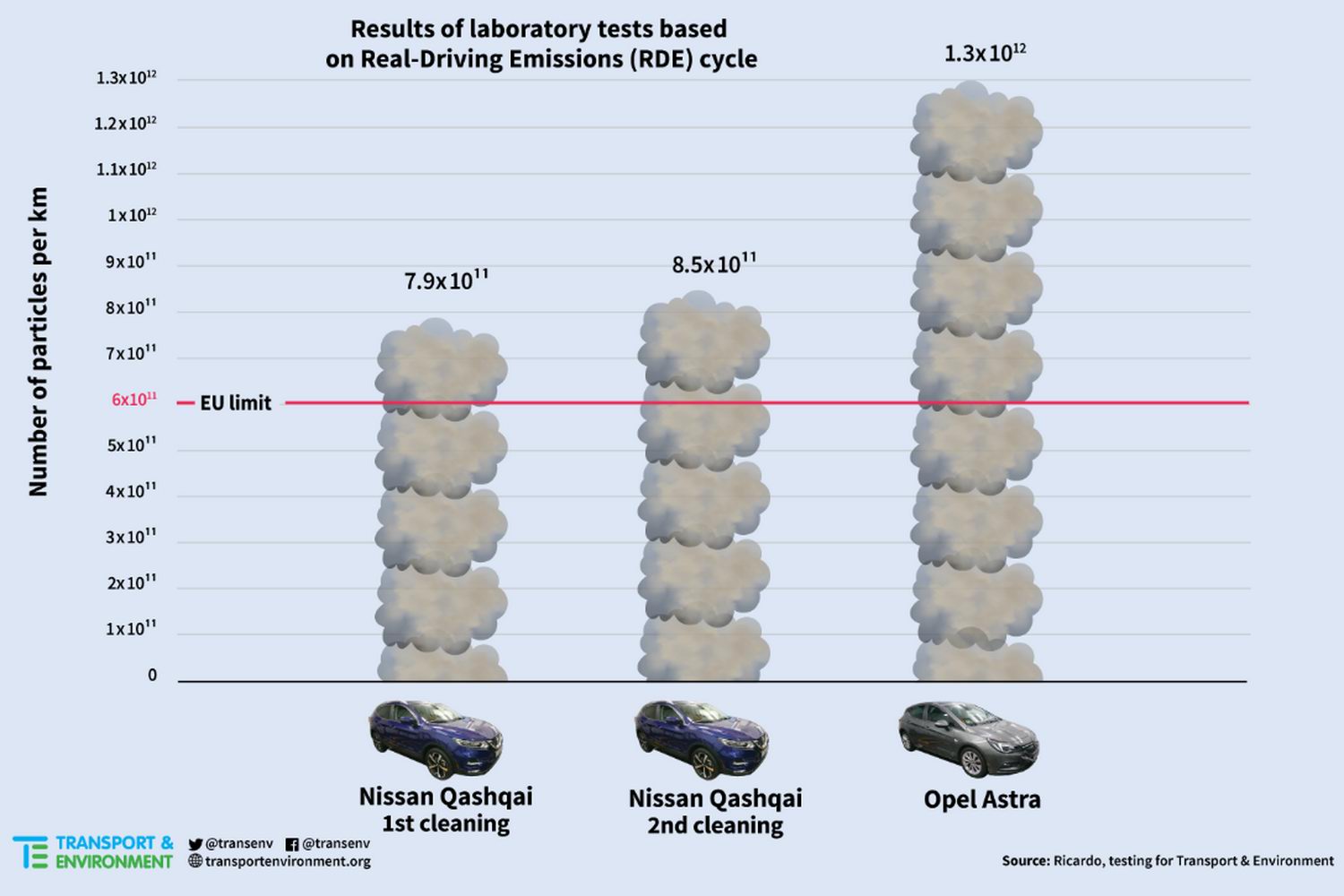 Soot emissions may spike to 1,000 times the limit during filter cleaning cycles.

Environmental think-tank, Transport & Environment (T&E), has warned of a potential new scandal surrounding diesel engines. This time, it's the particulate emissions - the tiny particles of soot emitted by an engine - that are under scrutiny.

According to a T&E study, carried out with the help of the Ricardo Engineering laboratory at the Shoreham Technical Centre in England, it was found that some leading models can emit as much as 1,000 times the legal limit of particulates.

The problem occurs when the car's exhaust filters go through a regeneration cycle. This is done at high engine temperatures to clean the collected soot particles out of the filter, extending the filter's life and reducing servicing and potential replacement costs to the car's owner.

T&E's findings seem to show that, on the Nissan Qashqai 1.5 dCi and the Opel Astra 1.6 CDTi, emissions of soot particulates spike way above the legal limit when the filter is going through its cleaning process.

In fact, the EU limit for solid particles larger than 23nm was exceeded by between 32 per cent and 115 per cent during the filter regeneration cycles. Emissions of other, non-solid matter, including nitrogen oxide (NOx) also increased.

Smallest particles not covered by legislation

T&E also criticised the official regulations, which only legislate for particles of soot larger than 23nm across. It has been claimed that smaller particles, as small as 10nm across, are actually the most harmful to human health, and when these are also taken into account in the lab tests, the emissions are as much as 184 per cent over the official limit during filter regeneration.

During the T&E Ricardo tests, both the Astra and the Qashqai activated their filter cleaning cycles after around 420 kilometres of driving - that's half the distance claimed on the original type-approval tests and another concern.

T&E says that there are currently 45 million diesel cars on EU roads and that adds up to something like 1.3 billion exhaust filter regenerations every year, roughly every second week for every diesel car on the road.

Most worryingly, the data shows that these regeneration cycles can kick in during urban motoring, which releases the particulates at the worst possible time, where they are most likely to directly affect human health. According to T&E: "Ambient particulate matter is ranked as the sixth highest risk factor for total deaths globally and particle pollution affects more people than any other pollutant, according to the World Health Organisation (WHO). It is also the component of air pollution that is 'most closely associated with increased cancer incidence, especially lung cancer' and chronic exposure to particulate matter is linked to cardiovascular and respiratory diseases. At present 77 per cent of inhabitants of European cities are exposed to particulate matter levels above WHO guidelines and even in areas where limits are met, the air is not necessarily safe to breathe as according to the WHO, 'small particulate pollution have health impacts even at very low concentrations - indeed no threshold has been identified below which no damage to health is observed.'"

Anna Krajinska, emissions engineer at T&E, said: "These tests show that new diesels are still not clean. In fact they are spewing out highly-dangerous levels of particles in our towns and highways every day. Carmakers are being given an easy ride but people's lungs are paying for it. Manufacturers should clean up their cars if they want to sell them. Regulated particles are only half the story. The smallest ultrafine particles are thought to pose a bigger threat yet they're ignored by official tests. The next Euro pollution standard must close the loopholes and set limits for all pollutants. The endgame is a standard that demands zero emissions from cars on our roads."