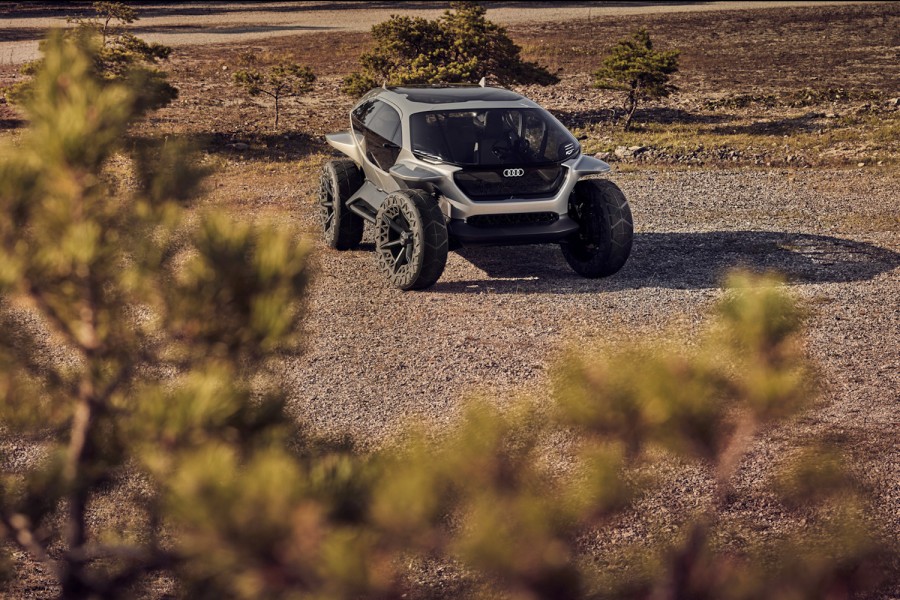 Autonomous off-roader with 350kW of electric power and a 500km range – this is Audi’s AI:TRAIL quattro.

In recent years at motorshows, Audi's concept cars have focused on autonomous driving and an electric future, in the form of the Aicon, AI:ME and AI:RACE (formerly the artist known as the PB18 e-tron). Well, at the Frankfurt IAA 2019, the German marque has revealed the fourth vehicle in this series, which is the weird and wonderful AI:TRAIL quattro.

Audi says the whole point of the AI:TRAIL, as its name somewhat gives away, is to provide an off-road vehicle of the future. It has four electric motors, systems for assisted and automated driving, and - of course - quattro permanent all-wheel drive. Short (4.15 metres) but wide (2.15m) and tall (1.67m), the largely glass, angular body of the AI:TRAIL sits above 22-inch wheels fitted with chunky 33-inch tyres. Ground clearance is rated at 340mm, which makes it pretty handy in the rough stuff and also keeps the floor-mounted battery pack from coming into contact with rocks and sharp surfaces.

While most autonomous-driving cars feature lots of screens so that occupants can stream a TV series or film, for example, the AI:TRAIL has none - the idea being that the broad glass panels provide a better view of nature's surroundings. Like the Aicon and AI:ME which have gone before it, the Audi has a protruding ridge halfway up the side windows, this line continuing into the front and rear bodywork to make the body 'one monolithic whole'. The packaging of its electric drivetrain and the use of light, super-strong materials means that the AI:TRAIL has great approach/departure angles, as well as a kerb weight of just 1,750kg.

That exterior design ridge gives passengers space in crucial dimensions, namely around their shoulders and elbows. The windscreen wraps around the front of the vehicle like that on a helicopter, so the visibility out is maximised for everyone onboard, and both it and the tailgate open wide to provide access to large storage compartments. There's a separate cubby hole at the back for dirty items, like hiking boots, climbing gear or wet clothing. Up front, there are pedals, a yoke for a steering wheel, minimal buttons and a smartphone attached to the steering column, which functions as the vehicle's control centre/navigation - these are the only forms of interaction between the driver and the vehicle.

The Audi AI:TRAIL quattro has coil springs and adaptive dampers, as well as 60mm of suspension travel. This aids both off-road ability and on-road passenger comfort. Further, its tyres feature variable, sensor-controlled air pressure regulation, so the AI:TRAIL can raise or lower its tyre pressures by scanning the road surface ahead and monitoring its ESC to work out what the best amount of air in the rubber will be for any given situation.

Eyes in the sky

Let's talk lights. The front and rear LEDs can illuminate inside and outside the vehicle in equal measure, but the AI:TRAIL is also equipped with a total of five rotorless, triangular, electrically operated drones with integrated matrix LED elements. These are light and generate their lift like bladeless fans generate airflow, and they can land on a roof rack or directly on the Audi's top if needs be. And they are what are called Audi Light Pathfinders - they fly in front of the AI:TRAIL and illuminate the best path ahead for the vehicle. They can also generate a video image that can be transmitted wirelessly to the display in front of the driver, turning them into 'eyes in the sky'.

As its name also suggests, the AI:TRAIL can drive on its own or it can have driver assistance. The idea is it does the former on the roads, and the latter when you're in rougher terrain. It is ratified up to autonomous driving Level 4, while its lithium-ion battery gives a range of between 400- and 500km. This is most important, given there are very few (all right, none at all) 350kW charging points out in the deepest wilderness, although its off-road range is a lower 250km due to the elevated wheel-slip draining the battery's energy quicker. The AI:TRAIL has a maximum speed of 130km/h, with peak outputs of 320kW (435hp) and 1,000Nm.