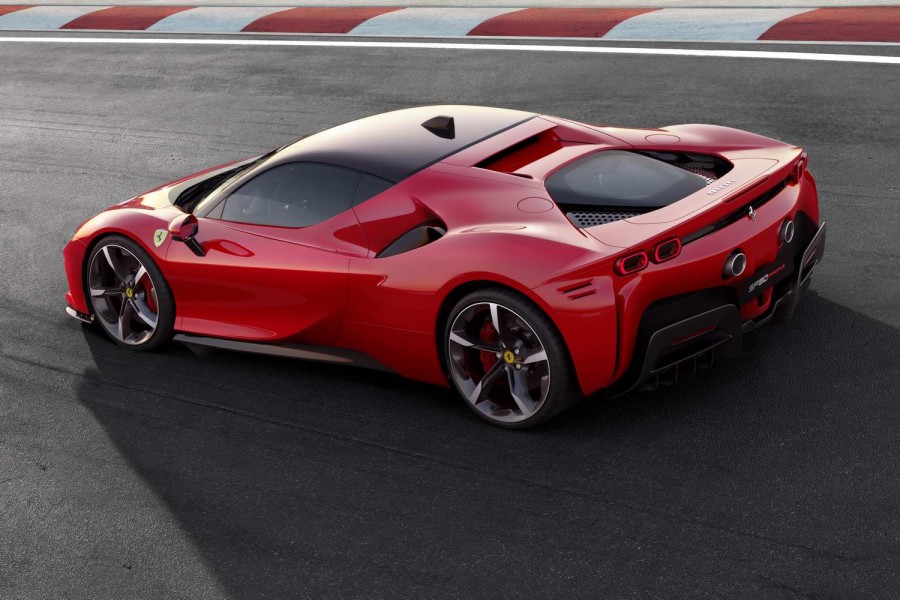 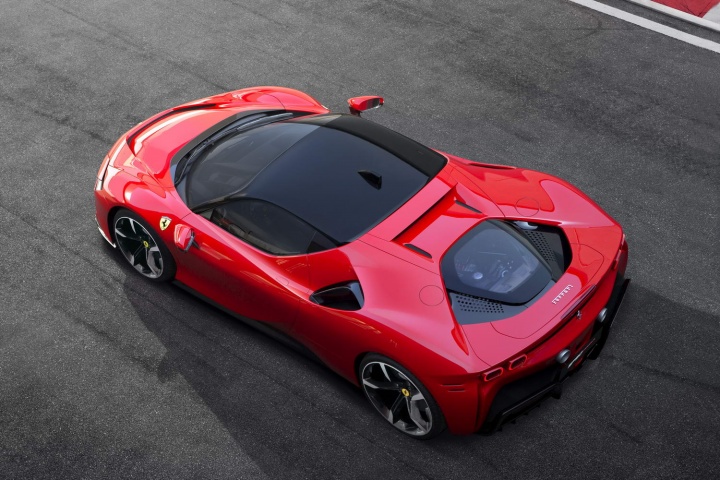 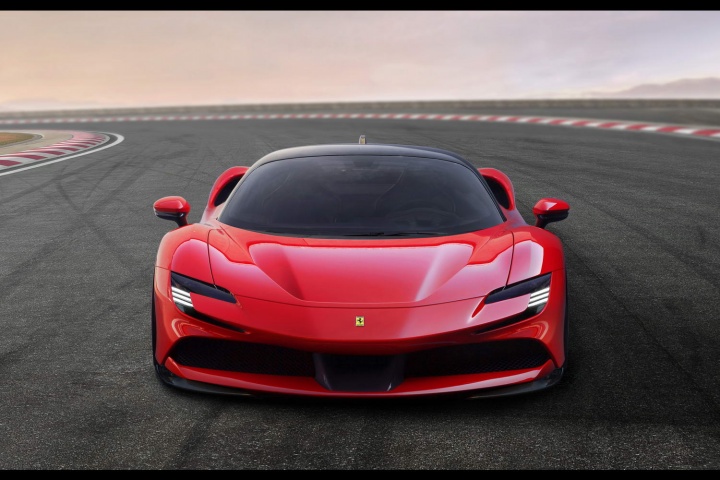 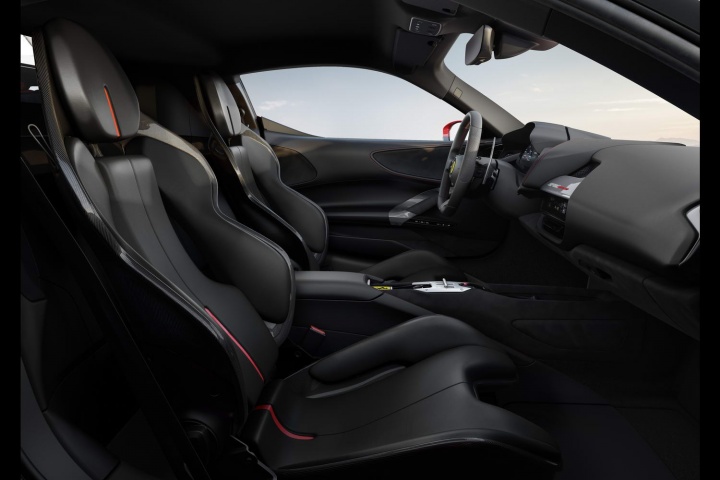 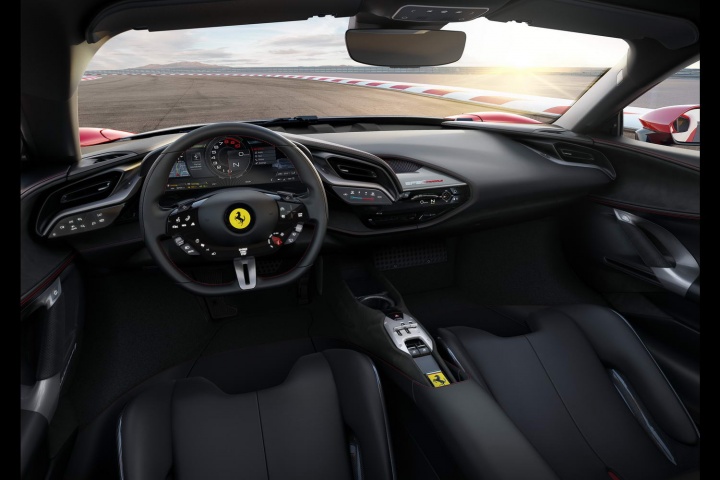 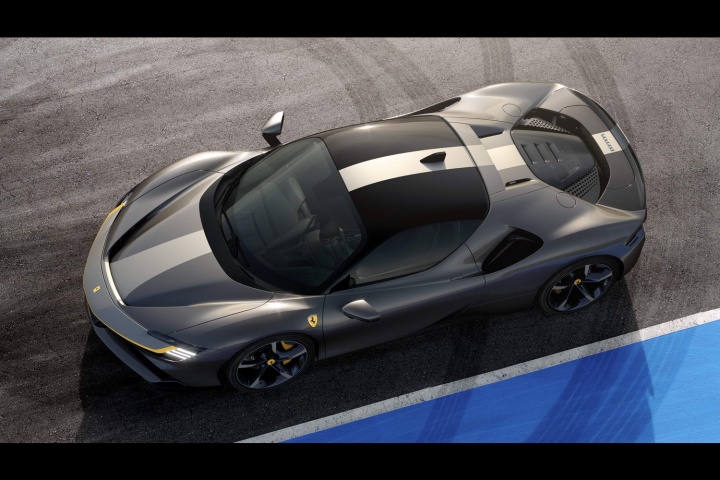 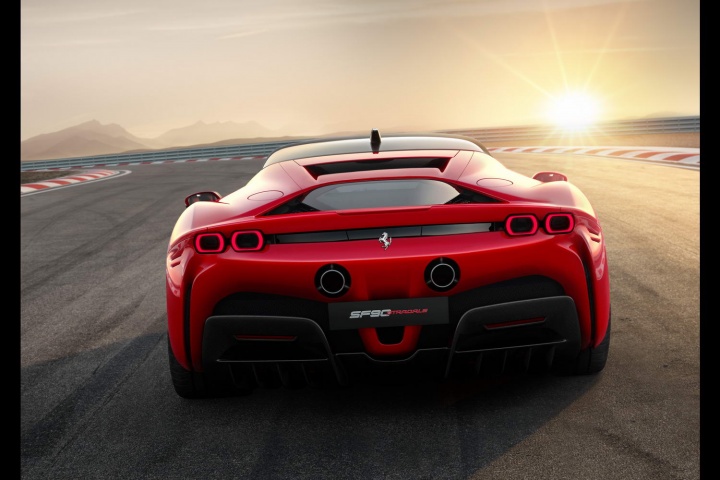 Ferrari’s most powerful model ever (with 1,000hp) is also its first-ever PHEV, too.

You're looking at the most powerful Ferrari ever built - and also the brand's first-ever plug-in hybrid electric vehicle (PHEV). This stunning creation is the SF90 Stradale and we've got the full run-down on it for you, right here.

We could talk about the design, and how Ferrari and the team under Flavio Manzoni has 'revisited the proportions of the front, central and rear volumes in a radical evolution' of the shapes of its mid-rear-engined production Berlinettas of the past 20 years.

Or how the headlights are rendered as narrow slits, with brake cooling ducts underneath forming a C-shaped pattern that's most distinctive. Or how it has a much more cab-forward stance than previous Ferraris. Or its lower tail with high-mounted exhaust pipes. Or the aerodynamics - which have to balance the downforce required to keep such a powerful car on the road surface with the cooling requirements of the hybrid drivetrain; and such a good job has the team done here that, while the engine and electrics are all kept cool (despite being capable of generating temperatures of up to 900 degrees C), the SF90 Stradale can still summon up fully 390kg of downforce at 250km/h. Or the forged alloy wheels, which are designed with radial elements to make them aerodynamically functional rotors. Or... we could just let you look at it. And drool. With your mouth gaping open. Yeah, we'll do that, actually.

The interior previews a new design language for all Ferrari cabins going forward and its one predicated on a wraparound, aeronautically inspired cockpit. All of the SF90 Stradale's human-machine interface (HMI) is digital, with a 16-inch digital HD screen in the instrument cluster doing the bulk of the display work. This is all controlled via one of the most advanced steering wheels ever to grace a production car - Ferrari has a 'hands-on-the-wheel' philosophy and this item, in particular, allows the driver to control virtually every aspect of the car without removing their hands from the wheel. All of the headlights, wipers, indicators and the Manettino for driving modes are located here, for instance.

Above this, there's a Head-Up Display which projects vital information into the driver's line of sight, while all of the graphics are designed to have a 3D effect; this is particularly noticeable during transition periods, such as when the driver cycles through various display screens or turns the instrument panel on/off. Even the transmission tunnel interface area has been remodelled, with F1-style controls on the 'bridge' set into a metal plate with references a Ferrari characteristic of the past: the classic open-gate gearshift.

It achieves all these because it pairs a 4.0-litre twin-turbo V8, rated at 780hp (the highest output of any Ferrari eight-cylinder in history), with another 220hp from three electric motors: one at the rear, known as the Motor Generator Unit, Kinetic (MGUK, an F1 application), which is mounted between the engine and the new eight-speed wet-dual-clutch transaxle gearbox; and another two on the front axle. And yes, if you're reading between the lines, that means the SF90 Stradale is four-wheel drive, which is about the only way such ferocious power (and torque, of which there's fully 800Nm at 6,000rpm, with a brief boost to 900Nm possible) could safely be deployed to the tarmac.

Those twin front electric motors, which handle all drive to the leading axle, can also split torque from side-to-side in a vectoring set-up, which Ferrari calls the RAC-e (electronic cornering set-up regulator). This feature alone is said to make driving the SF90 on the limit 'much simpler and easier'. Obviously, tech like this and the PHEV gear means increased weight, so the multi-material construction of the SF90 includes plenty of the favoured carbon fibre to keep the weight down - a dry weight of 1,570kg is quite remarkable, all things considered. Cleverly enough, reverse gear has been stripped out of the gearbox and is now a function of the front electric motors, which means the SF90 will move backwards silently; it also has an all-electric range of 25km and a maximum e-speed of 135km/h.

Keeping all this on the straight and narrow are technologies like electronic Side Slip Control (eSSC) with electric Traction Control (eTC), a brake-by-wire system with ABS and EBD, full Torque Vectoring (as mentioned earlier) and the four-wheel-drive set-up. With brakes that can stop the SF90 Stradale in less than 29.5 metres, and a top speed of 340km/h, this startling new Ferrari has lapped the company's Fiorano test track in a scorching 1m 19s. Cripes!

The Ferrari SF90 Stradale will come with a seven-year maintenance programme, which means an owner has to pay nothing to the upkeep aside from the usual consumables. Its name comes from the fact it's the 90th anniversary of the foundation of Scuderia Ferrari, the brand's racing division, and there will be an Assetto Fiorano specification for owners who want their 1,000hp PHEV to be even more sports-oriented - this includes GT racing-derived Multimatic shock absorbers, extra lightweight features made from high-performance materials such as carbon-fibre (door panels, underbody) and titanium (springs, entire exhaust line), resulting in a weight-saving of 30kg, and Michelin Pilot Sport Cup 2 tyres. It will also debut a new 'keyless tech' ignition key which will be introduced across the rest of the Ferrari range, which is personalised with the model's name and which sits in a special compartment in the central tunnel of the cabin.

Published on May 29, 2019
Written by Matt Robinson