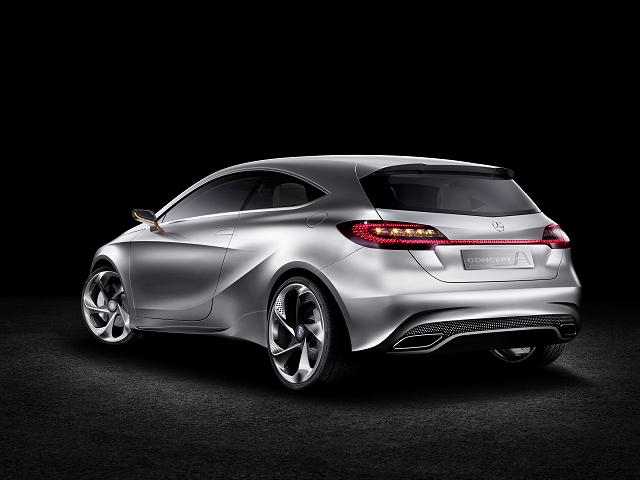 Spectacular concept shows how next A-Class Mercedes could look.

The current A-Class might be admirably clever technologically, but it's never been desirable in the way its compact premium competitors from Audi and BMW are. That could all change if this Concept A-Class is a sign of things to come. Gone is the tall, sandwich floor construction and in comes a lower, more conventional platform.

That new platform allows the Concept A-Class to exhibit less awkward proportions, being less MPV and more regular hatchback in its shape. Saying regular is a disservice to the Concept A-Class's beauty though, as Merc's stylists clearly had a good day when they penned it. The exterior is a riot of sharp creases and smooth curves, its bold front grille framing the large Mercedes-Benz badge with a dimpled 'starry' effect that creates an impression of depth. LED lights complete the striking frontal appearance.

Inside it's just as dramatic, with the circular instruments and air vents all highlighted by red detail lighting in the beautifully sculptural cabin. Four individual seats, a central spine running the cabin's length and a boot floor that's trimmed in leather and brushed metal are pure concept touches - and about as far removed from the current A-Class' interior as imaginable.

Paddle shifters behind the chunky steering wheel point to the Concept A-Class' new technology, as Mercedes-Benz is debuting a double-clutch automatic transmission in the show car. Other new technology for this segment includes radar-based collision warning and full smartphone integration. Power comes from a new turbocharged four-cylinder direct injection petrol engine with 210hp.

Underlining China's growing significance as a global marketplace the Concept A-Class will roll out at the Shanghai show later this month - and shortly after it'll be poked, measured and photographed extensively by China's native car firms. With Mercedes-Benz's recent production cars being remarkably faithful to their concept forbears Mercedes-Benz dealers better brace themselves for a glut of MINI, BMW 1 Series and Audi A3 trade-ins...