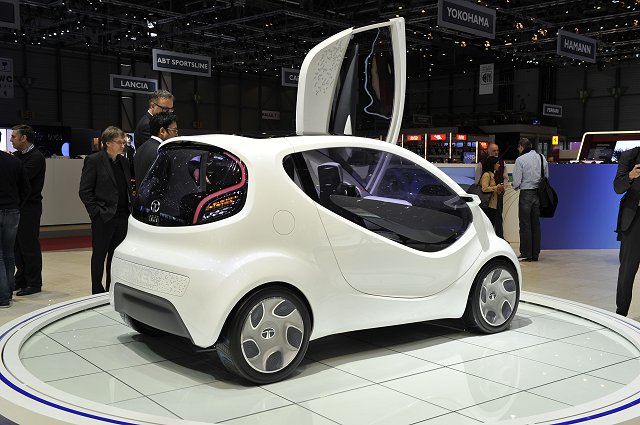 The Tata Pixel concept is a massive step up from the Nano and it could come to Europe.

The Pixel is a city car concept from Indian maker Tata, but aimed directly at the European market. It's only a shade over three metres in length, so is much the same in size as a Toyota iQ, yet it can seat four adults. The concept has scissor doors and a panoramic sunroof, but any production model is likely to be a no-frills city car.

Tata is determined to show the world it's not just about the Nano and cheap as chapattis motoring. The Pixel is based on the Nano platform for convenience, but it comes with plenty of technology and thinking to put it a good stride ahead of the Nano. For instance, the rear wheels can move fore and aft to help give the Pixel an incredibly tight turning circle of just 2.6 metres. There's also Tata's Connect system that integrates the driver's smartphone or iPad to work many of the car's controls - though this was a common theme among many car makers at this year's Geneva show.

For us, show stopper. It's not the most likely or high profile concept at the 81st Geneva show, but it's a hugely important one. Underestimate Tata at your peril - you could well be driving something very similar to the Pixel in the not too distant future. It also shows Tata is cottoning on very quickly to eco-tech in the form of stop-start for the 1.2-litre three-cylinder engine and regenerative braking to give 3.4 litres/100km (83mpg) and just 89g/km carbon dioxide emissions.