Fastest estate in the world unveiled 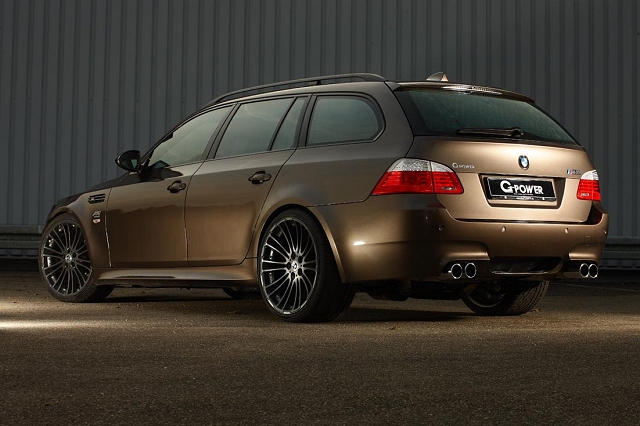 This is the G-Power BMW M5 Hurricane RS Touring, the fastest estate in the world.

The G-Power Hurricane RS Touring might be stuffed full of quilted velvet, yet it's anything but soft. In fact, it's the world's fastest estate car.

G-Power, the German tuner of all things Bavarian (well, just BMWs really) has turned its attention to the outgoing M5 Touring.

Power comes courtesy of twin-supercharging the standard 5.0-litre V10; it's the same engine that, in the four-door version of this car, took the saloon world speed record in 2008 with a 367km/h run. G-Power then broke its own record with the Hurricane RR, at 372km/h.

And as there's been no faster estate since the 2008 run, this takes the crown.

Making the BMW M5 that fast isn't a simple task, as you'll imagine. Each cylinder bank gets its own supercharger and there's a new twin-scroll intercooler, painted orange, characteristically. The standard con rods and pistons of the M5 can't cope, funnily enough, so G-Power replaces them, and it re-maps the ECU.

The brakes and tyres are upgraded, with 396mm perforated discs sitting inside the lightweight 20-inch front rims, and 380mm discs in the back. Buyers can specify carbon ceramic items if they please. The fully bespoke coil-over suspension gets nine-way compression and rebound adjustability.

Inside... well, you can see. Quilted orange is king, mostly diamond stitched and layered onto pretty much every visible surface.

So you're probably wondering what this über M5 Touring costs, and perhaps expecting a mildly disappointing 'if you have to ask' sort of answer. Well, disengage your cynicism, for G-Power has priced it down to the last fraction of a Euro: €242,016.80. Naturally that's the price in Germany, so don't even ask about importing one to Ireland...