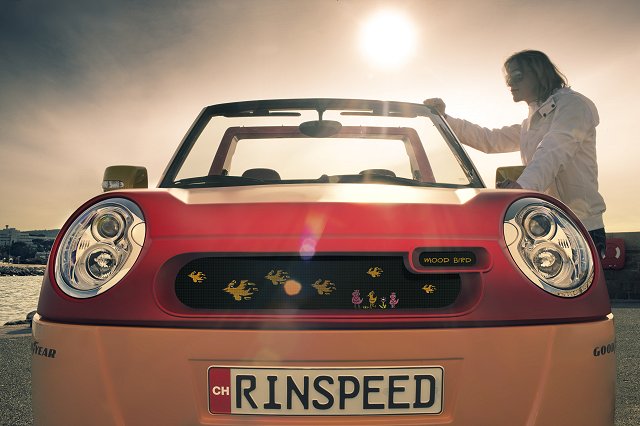 Rinspeed's latest creation, the BamBoo, will be on display at the Geneva Motor Show

More details of Rinspeed's BamBoo concept have been revealed ahead of the Geneva Motor Show.  The car is the result of collaboration between Frank M. Rinderknecht of Rinspeed and New York Pop Artist James Rizzi. Features include a display that replaces the radiator grille and an inflatable roof that doubles as a beach blanket.

The roof canopy was developed by Swiss company Tecnotex and uses water-resistant fabric.  The outside of the roof is decorated in a beach scene while the inside uses tread made - appropriately enough - from bamboo.

Instead of a radiator grille (not necessary because of the car's electric drivetrain), a feature called 'Identiface' is fitted.  Thanks to an on-board internet connection this can display the driver's Facebook page, online news or offer people a lift.  The driver can also communicate via the colour-changing 'Rizzi bird' design on the rollover bar: green means 'I am single'; blue, 'I am in a party mood'; while orange means, 'I need a break'.

The Rizzi bird also appears on the sides of the car's Bordeaux red bench seat.  More of the artist's work is reproduced on the centre of the seat.  The rear seats are inflatable; when not in use they are stored in aluminium cases and can be taken out and used as beach chairs.  The dashboard resembles a breadbox with the controls and instruments concealed on one side with a tablet PC and docking station on the other.

Driving the BamBoo is a 74hp electric motor; enough, it is claimed, to propel the 1,090kg vehicle to 120km/h.  Goodyear energy-saving tyres on 17-inch, three-spoke alloy wheels help make the most of the battery's capacity.  Range on a full charge is quoted as 106 kilometres.

Rinspeed says the BamBoo will 'push the reset button in the head of the observer'.  The firm also claims to have had 'constructive talks with a number of potential manufacturers'.  Whether the car reaches production or not it will be on display at the Geneva Motor Show from 1 to 13 March.