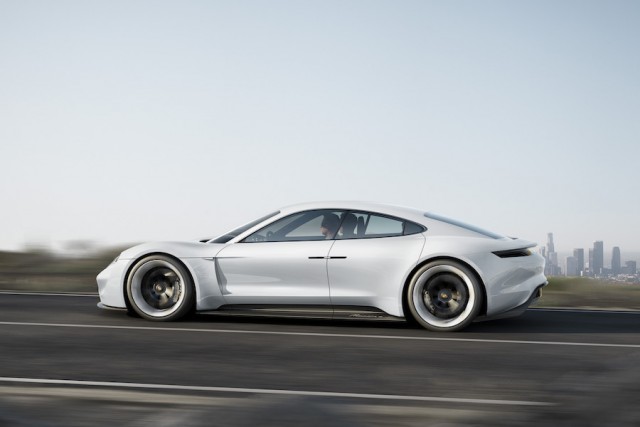 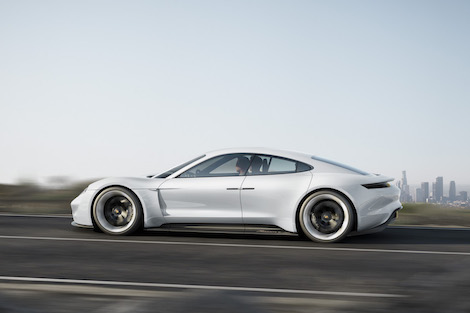 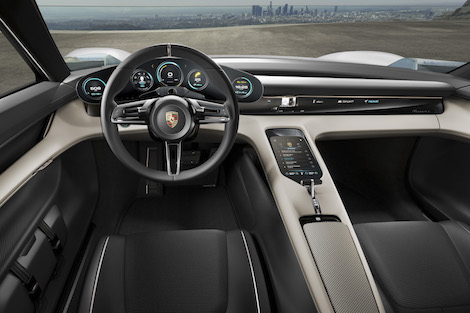 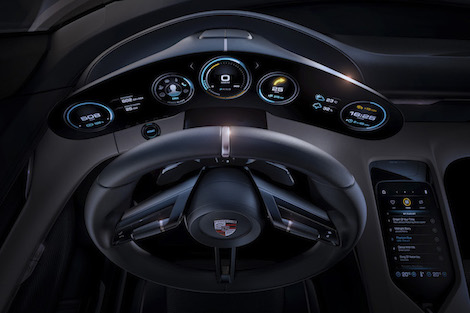 Boom! Just when you think teasers, Internet leaks and carefully managed PR campaigns have taken all the surprise out of motor shows, along comes Porsche with a total gem. This stunning creation is the Porsche Mission E concept study, the first all-electric four-seater sports car in the firm's history. Drink it in, y'all, because it's not clear whether this (or an offspring of it) is likely to make production soon...

Cor, if you're one of those people who thinks Porsche's designers are a bit lazy, the Mission E should make you think again. Lithe and athletic in a way the Panamera can only dream of, this thing looks incredible. It is unmistakeably a Porsche but has its own identity, helped by the fact it is just 1,300mm high. All of the little styling touches, such as the air inlets and outlets, are designed to help the Porsche be as aerodynamic as possible.

The front end is a particular winner, as it evokes the 918 Spyder and Porsche's 919 Le Mans winner with its four-point matrix LED headlights. You may also have noticed along the side that there's no B-pillar, a direct result of the rear doors opening in the opposite direction to the fronts. Suicide doors, we believe. One of our favourite touches? The illuminated, 3D Porsche badge in the wide, black strip at the back. Fabulous.

Again, it's Porsche-y in here but... sort of not Porsche-y, at the same time. So the familiar is found in the form of the sloping centre console and clean, attractive three-spoke steering wheel. The unfamiliar is represented by four individually sculpted single seats based on race buckets, an Organic Light Emitting Diode (OLED) instrument cluster incorporating five dials (Connected Car, Performance, Drive, Energy and Sport Chrono), eye-tracking technology so the Mission E knows which instrument the driver is viewing, and a holographic sub-display with touch-free gesture control. Oh, and a rear-view mirror camera-based function that displays a happy emoticon in the dashboard if the driver is in a good mood. We kid you not.

A pair of permanent magnet synchronous motors (PMSM), similar to those found in the victorious 919 Le Mans monster, both provide forward propulsion and harvest brake energy. On the former point, they develop more than 600hp, allowing the Mission E to whirr eerily from 0-100km/h in just 3.5 seconds, before hitting 200km/h in less than 12 seconds. Porsche says the PMSM units are still capable of developing their maximum power after multiple acceleration events over a short period of time.

The Mission E has on-demand all-wheel drive and four-wheel steering. Apparently, that means it can lap the Nordschleife in less than eight minutes. However, perhaps more pertinent than that is a 500km driving range, while it can be recharged to do another 400km in just 15 minutes. This is because the Porsche has 800-volt technology, rather than the 400-volt standard in electric vehicles on sale now. There are more benefits to this beyond shorter charging times, as the weight of the systems on board is reduced.

To ensure it drives like a Porsche, the lithium-ion battery pack is mounted in the chassis and it runs from the front axle to the back. That results in better balanced weight distribution and a low centre-of-gravity.

In all our excitement, we nearly forgot to tell you that Porsche Mission E's body is a mix of aluminium, steel and carbon-fibre reinforced polymer, while it runs on carbon wheels: 21 inches in diameter at the front and colossal 22s at the back.