Ford returns to the supercar game with all-new GT 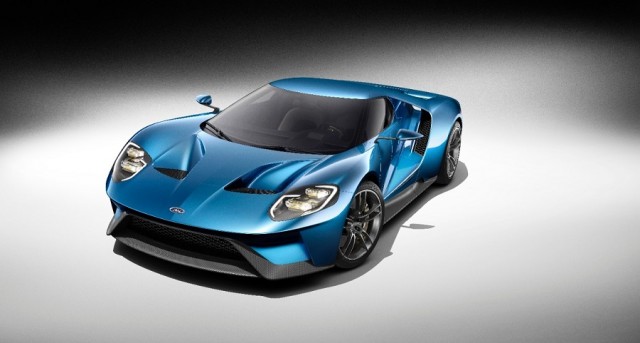 Ford has wowed the crowds at the North American International Auto Show (NAIAS) in Detroit by unveiling its all-new supercar called the GT. The mid-engined car uses carbon fibre and other lightweight materials throughout its construction to reiterate its high-performance intent.

Unlike the last GT, which was a modern recreation of the iconic racer from the 1960s, this new Ford GT has clearly been styled by time in the wind tunnel and although some design flourishes are reminiscent of the past this is clearly very much the modern supercar of today. The large gaping intakes on the nose of the car help to channel airflow as well as providing cooling.

A dramatic teardrop-shaped cabin tapers in behind the doors to cover the mid-mounted engine. The rear wheel arches, separate from the main bodywork, house vertical radiators ahead of the rear wheels while a radical buttress design element joins these to the roof design allowing airflow around the cabin to flow directly out of the rear of the car. This aerodynamic channelling also passes air over the integrated rear spoiler to add downforce at higher speeds.

When viewed from the rear the Ford GT clearly demonstrates its aerodynamic shape, which is worked around the two huge high-level centrally-mounted exhausts. The engine is clearly visible through a ventilated engine bay cover.

Access to the Ford GT's interior is far easier than the previous GT thanks to the dihedral doors that give way to a shallower sill. The cabin is one of clean and minimalistic design and is clearly driver-orientated. Its rectangular steering wheel apes that of a race car and is similar to the likes of that featured in the Ferrari LaFerrari. Large gearchange paddles are mounted behind the wheel on either side and the driver views a big colour dashboard display. The automatic transmission frees up a good deal of space in the cabin allowing for a more slender transmission tunnel.

Powering the Ford GT is a new twin-turbocharged 3.5-litre EcoBoost V6 engine that Ford claims will produce in excess of 600hp. Despite being turbocharged, Ford expects the engine to have a wide power band, along with the expected substantial levels of torque on tap.

The car's wide stance, combined with its high-performing aerodynamics, should give it very high levels of grip. Suspension comes in the form of an active torsion bar and pushrod setup that will feature an adjustable ride height. The GT's 20-inch lightweight alloy wheels will be shod with sticky Michelin Pilot Sport Cup 2 tyres that have a compound specifically developed for the car. Behind those wheels lurk carbon-ceramic brakes that will be capable of hauling the Ford GT to a stop in a short distance.

The premise for the Ford GT is mainly to mark the 50th anniversary of the company's famous 1-2-3 at the 1966 24 Hours of Le Mans. It is rumoured that production will be limited and the cost, although not officially confirmed, is expected to be on a par with the likes of Lamborghini's Aventador.