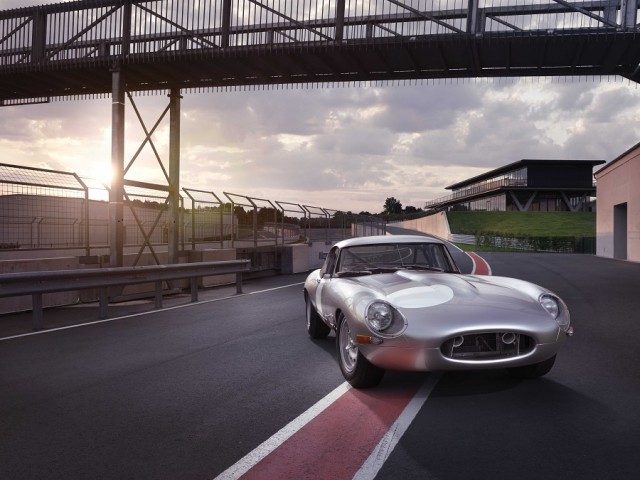 'Car Zero' shows off what the six new Jaguars will look like.

Jaguar's extraordinary decision to resurrect the E-Type Lightweight after a hiatus of more than 50 years is further bolstered by the reveal of the prototype model - ahead of a run of six production cars to complete the original series of 18 cars. They will be built by the Jaguar Heritage arm of the new Special Operations (SO) division.

Exterior
Each of these six cars will be hand-crafted to the same standards as the original 12 built from February 1963, with the resulting Lightweights sold as period competition vehicles FIA homologated for historic motorsport. Even better, they'll all be put together at Browns Lane, Coventry - the E-Type's original home.

The all-aluminium body shell is true to the original dozen, saving 114kg over the standard E-Type's steel structure, but Jaguar Heritage won't be using modern bonding techniques, as they wouldn't be 'correct' for the new cars and they would also preclude it from the FIA homologation. Instead, Heritage has digitally mapped the inner and outer surfaces of a Lightweight body shell to ensure the 230 components needed to build the body were tooled with the highest precision at Jag's Whitley engineering centre. The grades of aluminium used today are almost identical to those used for the 1963 examples.

This prototype is actually Car Zero, which means it won't carry one of the six 'dormant' Lightweight chassis numbers. Jaguar's design studio has picked a palette of six heritage paint colours recommended for the exterior - Carmine Red, Opalescent Grey metallic, Silver metallic, Opalescent Blue metallic, British Racing Green and Old English White - but the six lucky buyers can specify any combination of colour and trim alternatives they wish... in person, with no less than design director Ian Callum himself.

Interior
A roll-over cage is fitted as standard and the body includes mounting points for a detachable front extension, which is available as an extra. Otherwise, it's a perfect period piece with that glorious, thin-rimmed steering wheel, old-school bucket seats and a magnificent analogue dashboard. Connolly leather is used to 1960s specification, there's a choice of seven trim colours and a lot of Car Zero's interior has been unpainted to let the gorgeous aluminium shine through.

Mechanicals
It's the XK's straight-six engine up front, here in a highly-developed version that's a step on even from the same engine that powered the C- and D-Types to Le Mans wins in the 1950s. It features twin overhead camshafts, an aluminium, big valve 'wide angle' cylinder head with hemispherical combustion chambers, and - different to the D's cast iron affair - an aluminium block to reduce weight over the nose. It has a dry sump and runs a compression ratio of 10:1 with three Weber 45DCO3 carburettors, or alternatively customers can opt for a Lucas mechanical fuel injection system (at cost, as fitted to Car Zero). Either way, Jag claims 'well in excess of 300hp' and 380Nm of torque at 4,500rpm.

Power gets to the tarmac via a lightweight, low inertia flywheel, a single-plate clutch and a close-ratio, manual four-speed all-synchromesh gearbox. The standard final drive ratio is 3.31:1 but a variety of ratios are offered, all with the Powr-Lok limited-slip differential. Wishbone suspension all round, torsion bar/coil springs and uprated shock absorbers should keep things tidy in the handling department, while the steering is standard E-Type rack-and-pinion. Larger 311mm brake discs are fitted up front, with no servo fitted, while the 15-inch magnesium alloy perforated wheels finish the astonishing new Lightweights off perfectly; seven inches wide at the front, eight at the rear - they're wrapped in Dunlop CR65 racing rubber.

And the final note on this amazing recreation is that Jaguar will offer one of six unique Bremont watches to each of the E-Type Lightweight buyers. The 43mm timepieces echo the design of the Lightweight's RPM gauge, while its white gold case will feature an aluminium central band saved during the car's construction; Jaguar Heritage will anodise this metal to match the colour of the car it is designed to complement.