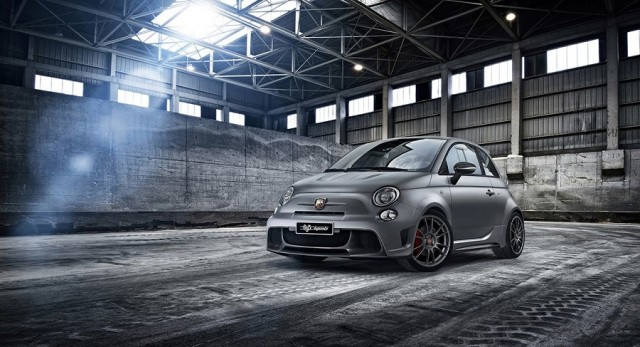 695 Biposto is the most potent Abarth yet.

Abarth has created what could very well be the craziest, small Italian car for some time with its latest model to be based on the popular Fiat 500. Called the 695 Biposto, according to Abarth it is the fastest street-legal car it has ever made.

Exterior
Everything about the 695 Biposto says 'race car'. The bonnet, in tribute to the original 124 Abarth, has two bumps in it and is made from aluminium. The mirror covers are made from carbon fibre, as are inserts in both the front and rear bumpers. Side windows are fixed in place and have polycarbonate sliding panels to allow airflow into the car. Its aggressive rear diffuser surrounds the two large-bore Akrapovic exhausts while the Biposto's bodywork is finished in a textured paint aptly called Performance Grey.

Interior
Those seeking the finer creature comforts in life will be deeply disappointed by the 695 Biposto. Everything that wasn't completely necessary has been stripped out of the interior, leaving the car looking like little more than a full-on racer. The door panels have been replaced by simple straps in which to pull them closed, the seats are thinly padded bucket race seats that feature carbon fibre backed shells and to complete the racer image, Sabelt provides four-point harnesses to hold the two occupants in place. The rear has been stripped of its seats and in their place is a titanium roll bar and cargo netting.

Mechanicals
At the heart of this road-legal racer is a 190hp version of Fiat's 1.4-litre T-Jet petrol engine, which, thanks to Abarth's tuning engineers, can propel the 695 Biposto from 0-100km/h in just 5.9 seconds. The car sits low thanks to the Extreme Shox adjustable dampers, while the flared arches are filled with lightened 18-inch OZ rims. Brembo provides the braking system. Those who are a little more competitive will make use of the car's MXL digital data logger.

The transmission features a dog ring gearbox with disc and clutch self-locking differential, meaning the driver can upshift without having to use the clutch. Not only is this real race car technology it also looks it thanks to an exposed all-aluminium turret in a H-configuration.

Anything else?
If all that isn't enough for you, Abarth is also offering a '124 Speciale Kit', which adds an aluminium bonnet with a unique design, titanium fuel, water and oil caps.