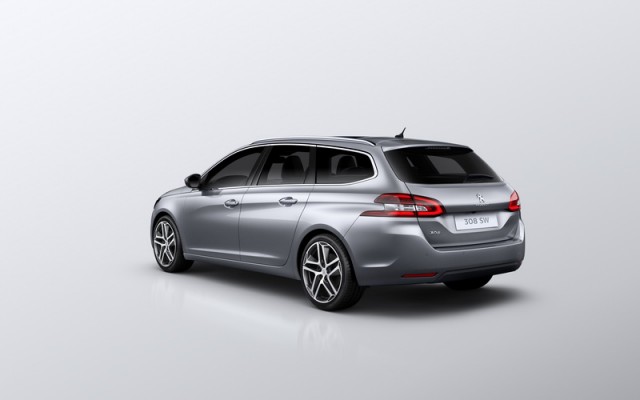 As Peugeot's continued rebirth as an upmarket brand gathers pace, the latest version of the popular 308 SW (that's estate to you and me) has been revealed. It has a big task ahead of it, though, as there's a bevy of similarly-sized estate vying for the same buyers' money.

Exterior
Peugeot's styling has been a subject for some debate in the motoring world for many a year now, and as the latest 308 hatch still engenders mixed opinions, it's unlikely the SW will win universal acclaim. We do welcome the handsome-if-staid looks of the new SW. Too Germanic? Possibly, but it's certainly not ugly. The 308 SW is 4.58m long and 1.47m high, which Peugeot says gives it a 'sleek and sporty' stance; we'll leave it up to you to decide if that's marketing flimflam or not.

Interior
The i-Cockpit design of other current Peugeots is present, with its high instrument binnacle, 9.7-inch central touchscreen and lack of buttons. Peugeot is aiming for high-quality materials to hammer home the message that the 308 is truly premium, while the SW has a 'class-leading' 610 litres of boot space (Honda claims that the Civic Tourer holds 624 litres...), made all the more usable thanks to easy, single-action folding rear seats and a flat load floor. There's likely to be the same three trim levels as the hatch - Access, Active and Allure - with the SW presumably carrying a price premium over its sibling, which is on sale from €18,990 in Ireland. The SW will go on sale across Europe in spring.

Mechanicals
Going light on the details ahead of its debut at the Geneva Show in March, Peugeot says the range of petrol and diesel engines for the 308 SW are all Euro 6 compliant. So expect the same units as found in the hatch, namely a 1.2-litre turbo petrol engine with 82hp and two versions of the 1.6-litre turbodiesel, at 92- and 115hp. Like the hatchback, the SW is claimed to be 140kg lighter than equivalent versions of its predecessor, thanks to Peugeot's Efficient Modular Platform (EMP2), which Peugeot says will also make it more entertaining to drive than competitor vehicles.

Anything else?
A quick perusal of the photos should show you that one of the old SW's party pieces - namely, possessing seven seats - seems to have gone by the wayside. The images suggest this SW is now only a five-seater. Whether seven-seat versions will follow soon is unclear, but it might be something Peugeot would like to consider so that it doesn't alienate its existing customer base.