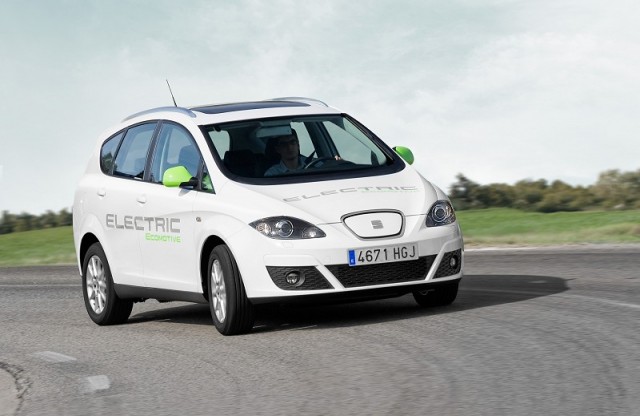 The snappily-titled Altea XL Electric Ecomotive is SEAT's first ever all-electric car, and rather than borrow from the Volkswagen Group parts bin it has been designed, developed and made in Spain, SEAT's home country. It will be put on trial with governmental institutions to gather data on usage, which will feed into the development of a possible electric production car by 2016.

The Altea uses an 85kW (115hp) electric motor, which also produces a maximum of 270Nm of torque. Top speed is limited to 135km/h and SEAT claims that it will travel up to 135 kilometres on a full charge. The batteries are located under the seats and boot so the passenger compartment is the same size as in the regular car's. When parked up, solar cells in the roof power a fresh air recirculation system so there's less demand from the air conditioning when the car is started up again.

Dr. Matthias Rabe, executive Vice-president for R&D, stated that "SEAT has its electric future assured. With the electric Altea XL we are showing just how mature our technology is". He added "the electric Altea XL was an intentionally studied choice for the first fleet. It will enable us to experiment with a wide variety of uses".

SEAT isn't putting all its eggs in one basket though. It's also developing a plug-in hybrid based on the Leon. The prototype is called the Leon TwinDrive Ecomotive and it too will be tested by selected drivers. SEAT reckons it'll have a plug-in hybrid to market by 2015. The Leon TwinDrive can run on electric-only power for up to 52 kilometres at speeds of up to 120km/h. Calculations suggest that the combined fuel consumption is only 1.7 litres/100km and that equates to a CO2 rating of just 39g/km.

Dr. Rabe comments that "the Leon TwinDrive Ecomotive is an exciting and ground-breaking solution. Technically, it allows you to drive in all-electric mode, while at the same time enjoying smart hybrid drive". To which he adds "Thanks to its great range, none of our customers will need to change their lifestyle or transport habits".