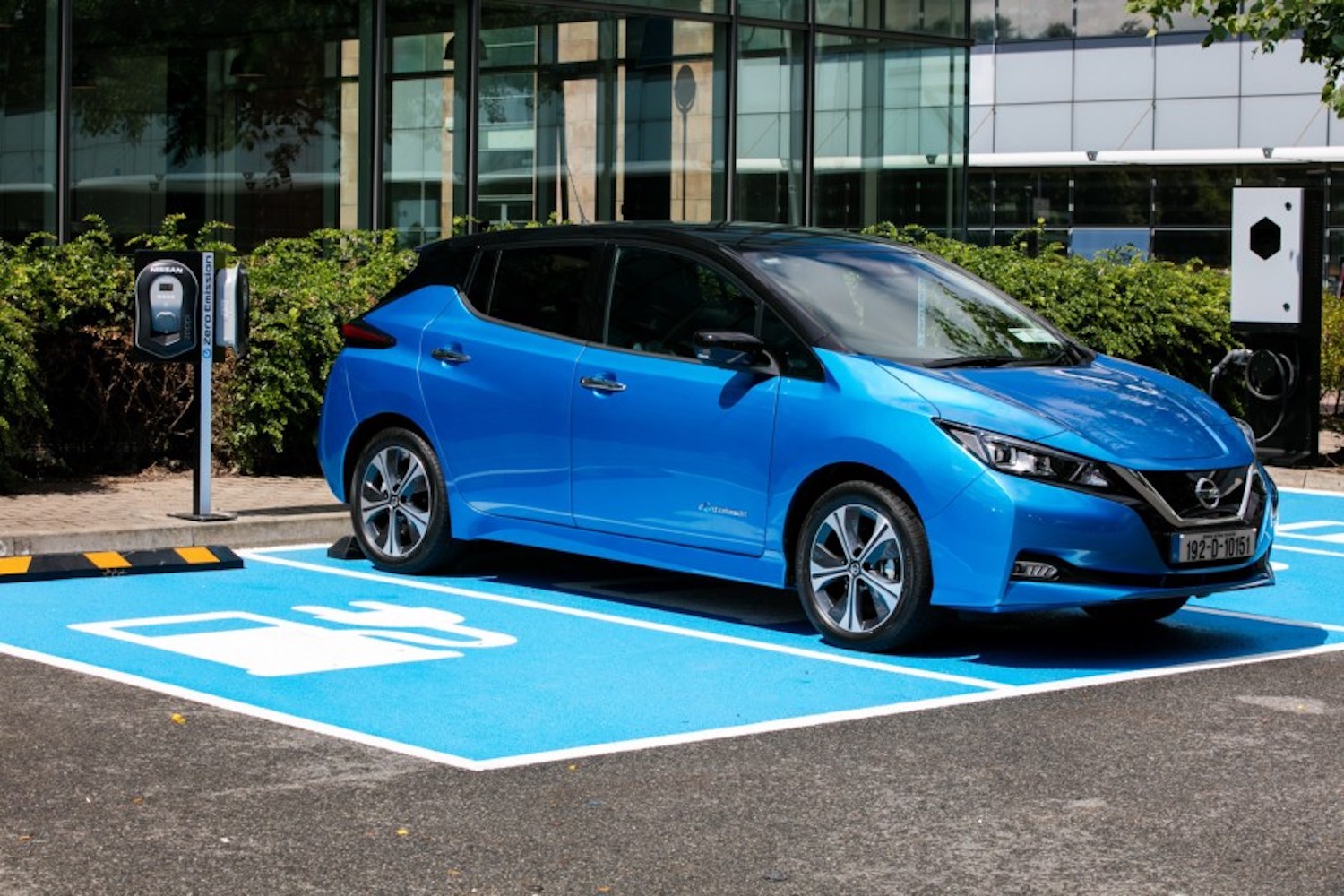 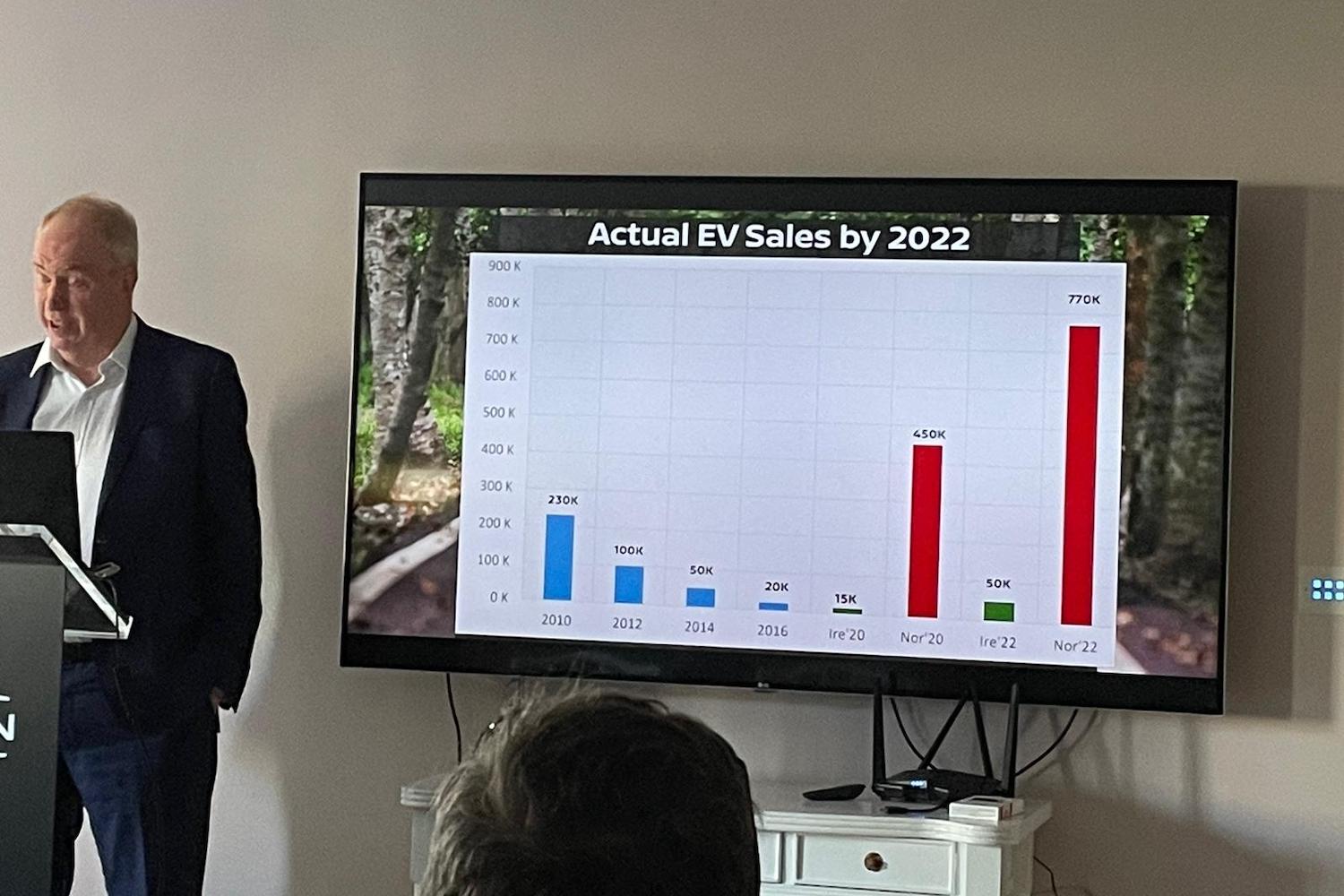 Nissan Ireland has sharply criticised rumoured plans to scale back the government's ambitions for electric vehicle adoption in Ireland and launched a stinging broadside against the Minister for Transport, Eamon Ryan.

Amid speculation that the minister will shortly revise downward to 650,000 the target for one million electric vehicles on Irish roads by 2030 as laid out in the national Climate Action Plan, Nissan urged the government not to abandon the plan and to keep in place EV grant schemes lest there be a fall-off in sales.

It is expected, Nissan says, that a review of the Climate Action Plan will emphasise reducing car dependency and promoting a shift towards public transport, cycling and walking. Nissan has described the plan as a "pipe-dream" and has said that it is out of touch with the realities of life in Ireland and that the government needs to do more to encourage the uptake of electric vehicles by investing more heavily in charging infrastructure.

"We are on track to achieve the target of one million EVs by 2030," said James McCarthy, CEO of Nissan Ireland.

"Now is not the time to be writing a new Climate Action Plan on EV adoption or to be phasing out the grants that are incentivising thousands of motorists to make the switch to zero emissions driving." "The Minister's proposal to reduce car travel and car dependency is a pipe-dream that ignores the reality of family life in Ireland. A car is a necessity for families living in suburban and rural settings. There will be more cars on Irish roads as our population grows and the age profile of drivers widens and our priority must be to ensure that these cars are cleaner, electrified vehicles," said McCarthy. "The Government needs to step up its EV strategy, to increase EV grants, to extend the 60,000 ceiling that applies for grants and to invest heavily in developing Ireland's EV re-charging infrastructure as the most effective means of reducing transport CO2 emissions." "Nissan has backed the Government EV target since 2019 when we predicted that 15 per cent of car sales would be EV by 2022. We were bang on the money. EV sales are currently 86 per cent up on last year, and 15,000 motorists have switched to electric driving in 2022. This trajectory proves that we can achieve the target of one million EVs by 2030, and there is no rational reason to abandon it," said Mr McCarthy.

A couple of caveats

However, it should be pointed out that the government's EV targets in the Climate Action Plans are, in actuality, wildly and perhaps unachievably ambitious. As CompleteCar.ie noted following the unveiling of the Climate Action Plan, based on then-current sales figures, every single car sold between now and 2030 would need to be an electric vehicle for the government to hit its target figure of 936,000 private cars on our roads by 2030.

Any potential realignment of the government's targets on electric vehicles would, thus, represent a more realistic assessment of the pace of EV uptake in Ireland, especially given that automotive supply chains still remain constrained in light of a range of global factors, including the semiconductor shortage, the war in Ukraine and Covid-related lockdowns in China.

It should also be noted that at the time of writing, the rumoured changes to the Climate Action Plan have not been confirmed by the government.

Nissan also called on the government to maintain its grant scheme for electric vehicles in light of the disimproving economic climate where rising inflation, interest rates and energy prices have dented consumer spending power at a time when car prices have also been increasing due to the aforementioned supply chain issues. Nissan says that EV prices, particularly, have been badly affected, with lithium for batteries having risen by 203 per cent since January.

"EVs are becoming more expensive and that is why the €5,000 EV grant is so important," said James McCarthy.

"Its existence incentivises buyers to choose an EV over an ICE (internal combustion engine) vehicle 95 per cent of the time. Any move to reduce or phase it out will trigger a dramatic slump in EV sales," he warned. "The negative effect that the removal of the grant scheme for plug-in hybrid electric vehicles (PHEVs) has had on sales is a case in point that should be setting alarms bells ringing. PHEV sales have fallen by 28 per cent since the grants were withdrawn last March and the PHEV market for 2022 is now stagnant compared to the significant year-on-year growth that was achieved when the grant existed," he added.

It's worth noting, however, that sales of plug-in hybrid vehicles have also generally declined in other markets where grants have either never existed or have not existed in some time, such as in the UK. Since January, sales of plug-in hybrid vehicles in the UK have fallen by 13.2 per cent during a time when, despite the total removal of grants for the purchase of battery-electric vehicles, EV sales have soared by 38.4 per cent. Plug-in hybrids were last eligible for purchase grants in the UK in 2018 which suggests that any fall-off in their sales is far less to do with the axing of grants and far more to do with a greater tendency for buyers to see a fully-electric vehicle as a viable alternative.

McCarthy questioned why the Minister for Transport was potentially proposing another u-turn on Ireland's EVs target at a time when countries around the world are setting higher targets, having identified EV adoption as one of the keys to reducing greenhouse gas emissions and achieving net-zero emissions. "Ireland and Norway both started in 2010 with the same ambition of having 230,000 EVs on their roads by 2020," he said.

"Ireland got to 14,500 EVs while Norway hit 500,000 EVs. Our target was reduced to 50,000 in 2014 and to 20,000 by 2016, and we still couldn't hit that target. In 2019 the government announced an ambitious but achievable target of one million EV's by 2030, which now looks set to be cut to 650,000 before Christmas. The moving target is undermining public confidence in Ireland's EV strategy," said Mr McCarthy, echoing sentiments the broader Irish motor industry expressed in recent months and years.

McCarthy went on to sharply criticise the track record of Minister Eamon Ryan, whose Green Party in the past pushed for tax breaks for diesel cars at a time before the now-infamous Dieselgate scandal shone a light on the fact that despite their lower CO2 emissions, diesel cars weren't nearly as clean as they seemed and produced unacceptable levels of particulate matter, long-term exposure to which can be harmful to human health.

"Minister Ryan has a less than impressive record on environmental protection in the transport sector. This is the person who promoted tax breaks for diesel cars, and he is now trying to convince us that the best way for the Government to achieve its target of a 51 per cent reduction in overall greenhouse gas emissions by 2030 is to reduce our EV target by more than one third," McCarthy said. "Improving public transport infrastructure is not mutually exclusive to achieving a target of having one million EVs on Irish roads. Minister Ryan should be looking at delivering the two in tandem. He needs to stay the course on EVs, to increase EV grants, to extend the 60,000 ceiling that applies to them and to invest in developing Ireland's re-charging infrastructure as the most effective way to reduce transport emissions," he concluded.