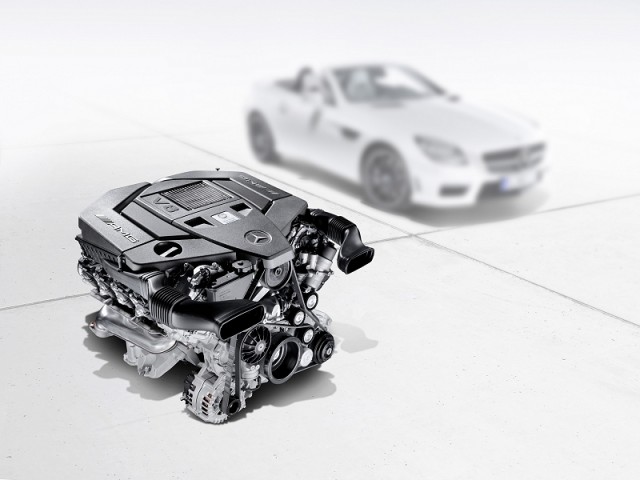 In showing us its fancy new 5.5-litre V8 Merc has revealed its new SLK 55 AMG.

An all-new 5.5-litre V8 engine for the SLK 55 AMG will offer an additional 62hp over its predecessor for a total power output of 422hp.

Mid-range torque has also been improved to 540Nm, yet Mercedes has cut fuel consumption for an average of 8.5 litres/100km (33.2mpg). CO2 comes in at a very respectable 199g/km, helped by the car's standard stop-start system.

The V8 engine is derived from the one used in the CLS 63 but does without the twin turbochargers. To fit in the SLK's engine bay, the powerplant had to become normally aspirated, as the turbos wouldn't fit.

New for the SLK 55 is AMG Cylinder Management, which allows the engine to run on four cylinders rather than eight when the car is being driven gently. The cylinder shut-off works between 800- and 3,600rpm, but the other four cylinders coming back into play in 30 milliseconds.

The lightweight aluminium V8 engine also has exhausts with integrated flaps in the silencers that open up at 2,000rpm to give a louder, sportier sound.

Mercedes has yet to confirm performance figures or pricing for the SLK 55 AMG, but they'll be announced at the Frankfurt motor show in September. The SLK 55 will then go on sale in 2012.