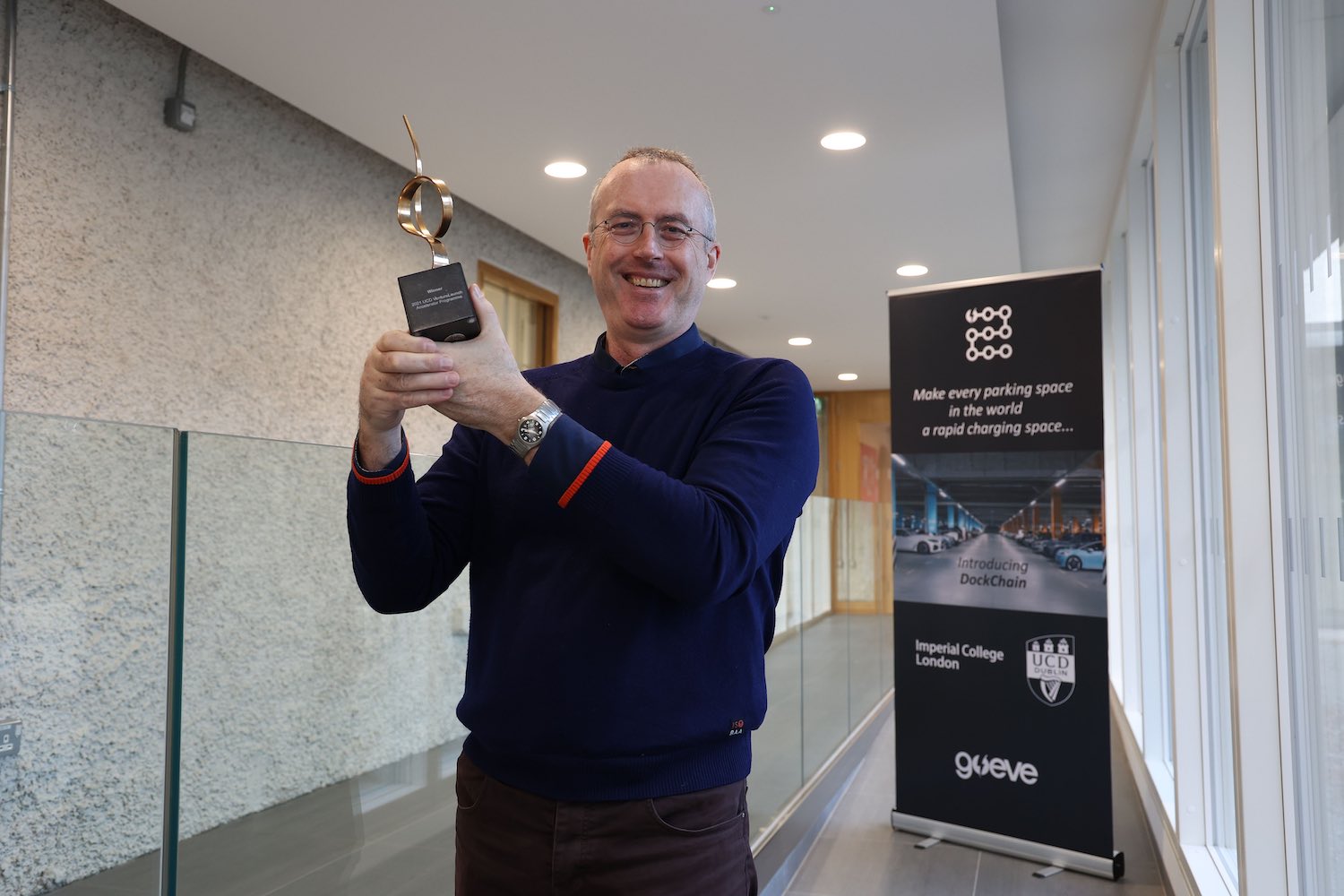 Go Eve, a start-up currently developing technology to expand the availability of DC charging points, has won UCD’s Start-Up of the Year award.

Go Eve, a start-up company working to develop improved EV charging technology has been declared the overall winner of the 2021 UCD VentureLaunch Accelerator Programme, winning the Start-Up of the Year award and scooping a prize-fund worth €32,000.

The start-up, which is a joint venture between University College Dublin and Imperial College London is currently attempting to commercialise what it describes as "DockChain" technology allowing more electric vehicles to be charged in the one place at the one time.

How does DockChain technology work?

While AC charging points are cheaper than DC ones, they tend to be much slower. DC charging points may be faster, but they're much more expensive to buy and install, and each point can usually only accommodate two cars. Go Eve's system envisages one single power source with a "daisy chain" of linked power outlets, allowing multiple vehicles in a car park to be charged all at once. It sees the technology as a much cheaper way to rapidly expand the public DC charging network to enable it to deal with an ever-increasing number of EVs on the road.

The technology was originally invented by a team led by Professor Robert Shorten at UCD, but as Shorten has since relocated to Imperial College London, further research and development is ongoing there. Seeing the potential to commercialise the technology, Go Eve was founded by Hugh Sheehy, currently the CEO. The venture was supported by NovaUCD, an incubator for new business enterprises and entrepreneurs which is part of University College Dublin.

According to Sheehy: "The technology has the potential to open up a whole number of use-cases, especially where large volumes of EVs are parked, such as for car rental fleet operators, large destination car parks in hotels and office buildings. Many other applications are being examined, from municipal parking to advanced Vehicle-to-Grid solutions."

Speaking of the plan, Hugh Sheehy said: "We currently plan to run three pilot programmes with three customers during 2022 and we are now seeking to secure seed investment of €3 million to support these pilot programmes, to support further product development and design and team expansion."

Sheehy is proud of his and his team's win at the awards, saying:

"We are truly honoured to have won the 2021 UCD Start-up of the Year Award. Our vision at Go Eve is to make every parking space capable of charging an EV using the DockChain technology. This technology makes rapid DC charging possible for all parking spaces at little more than the cost of today's slow AC charging infrastructure."