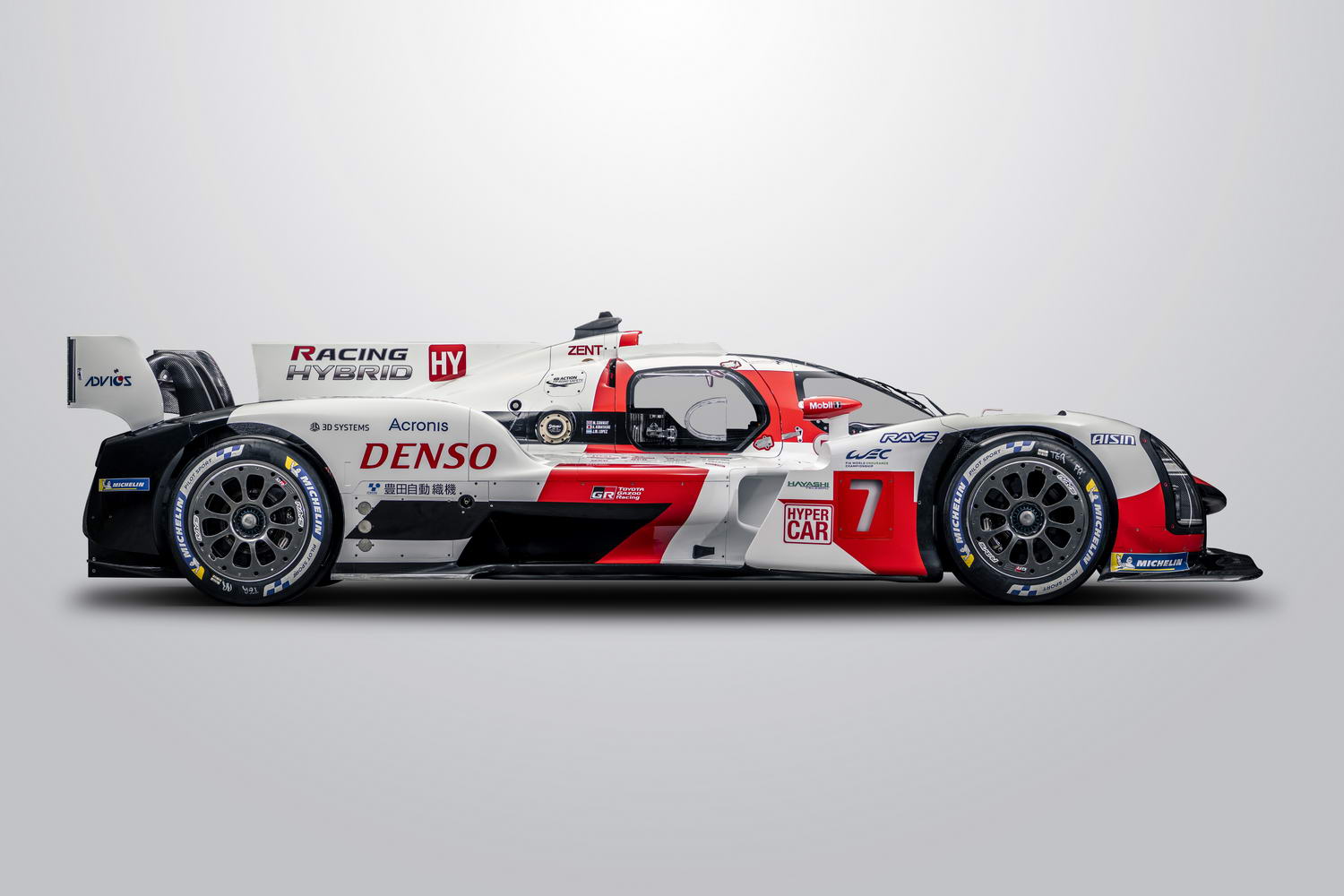 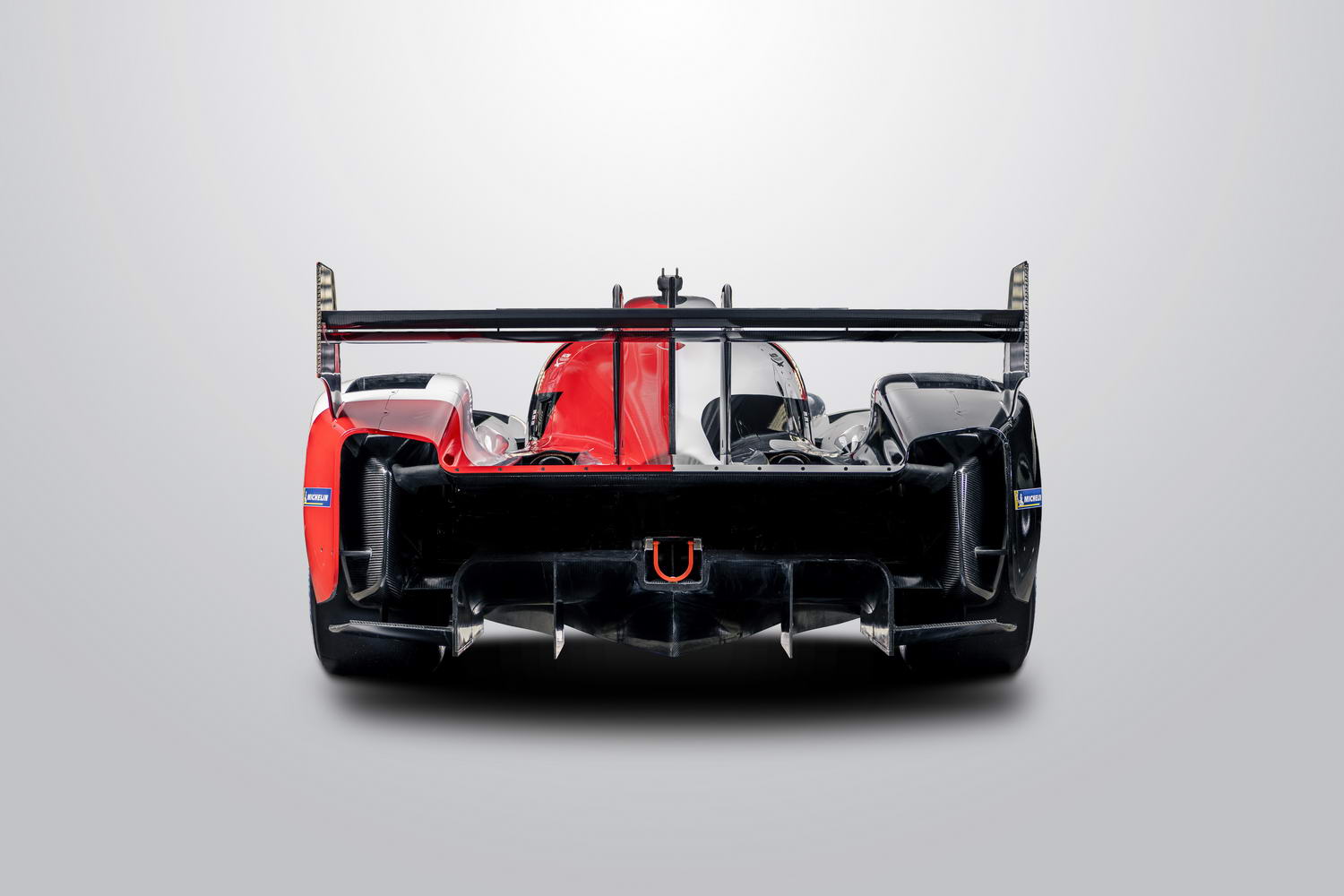 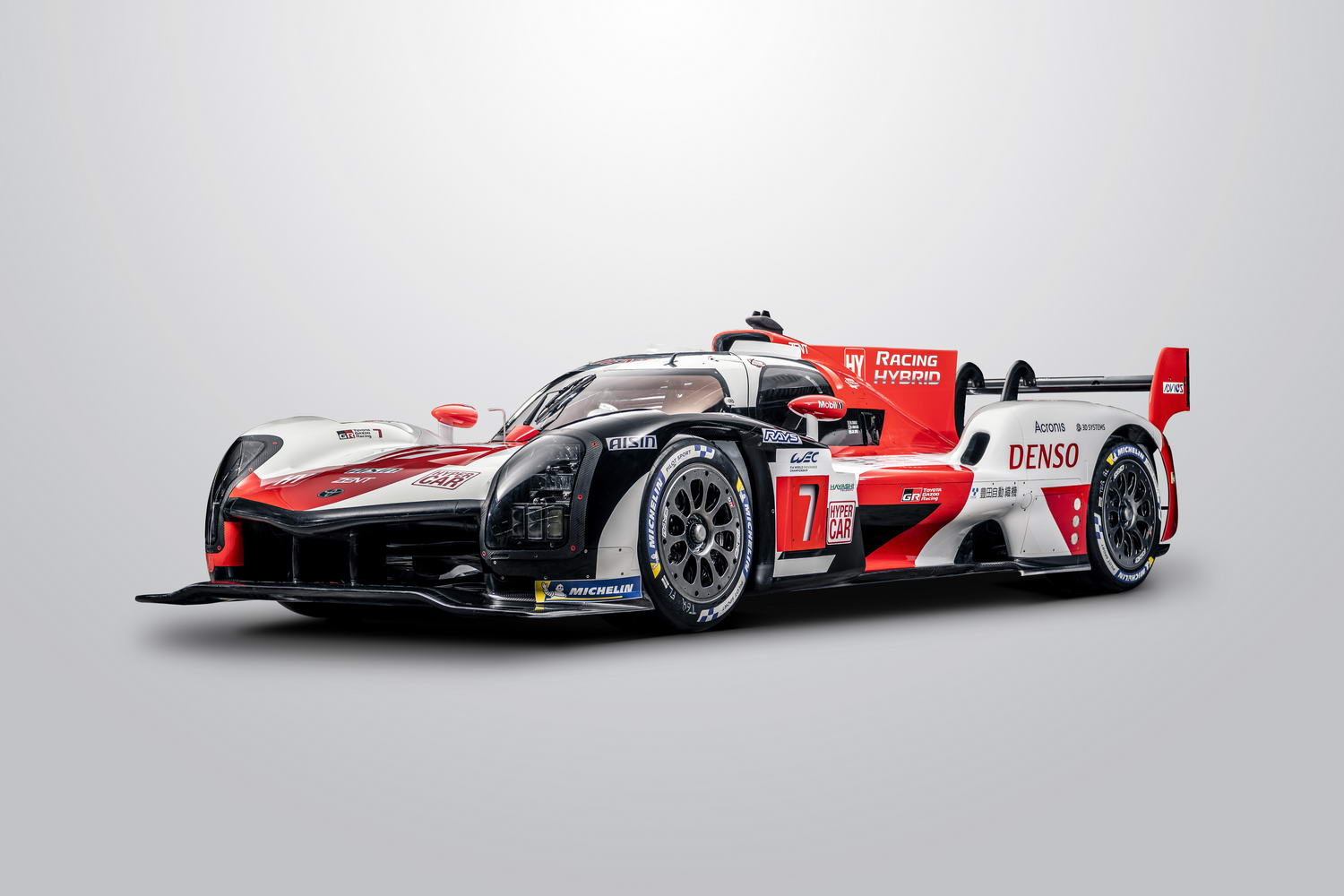 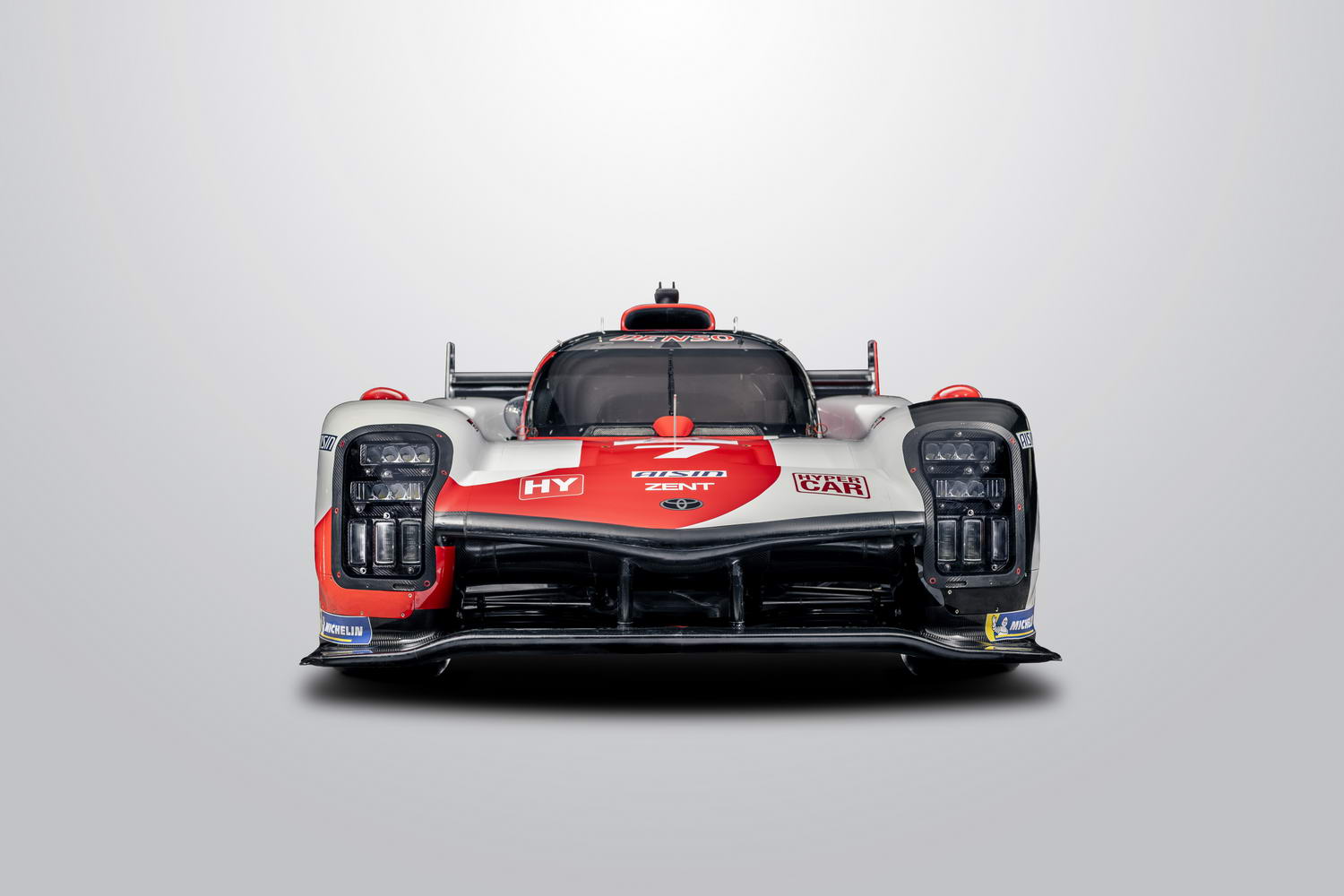 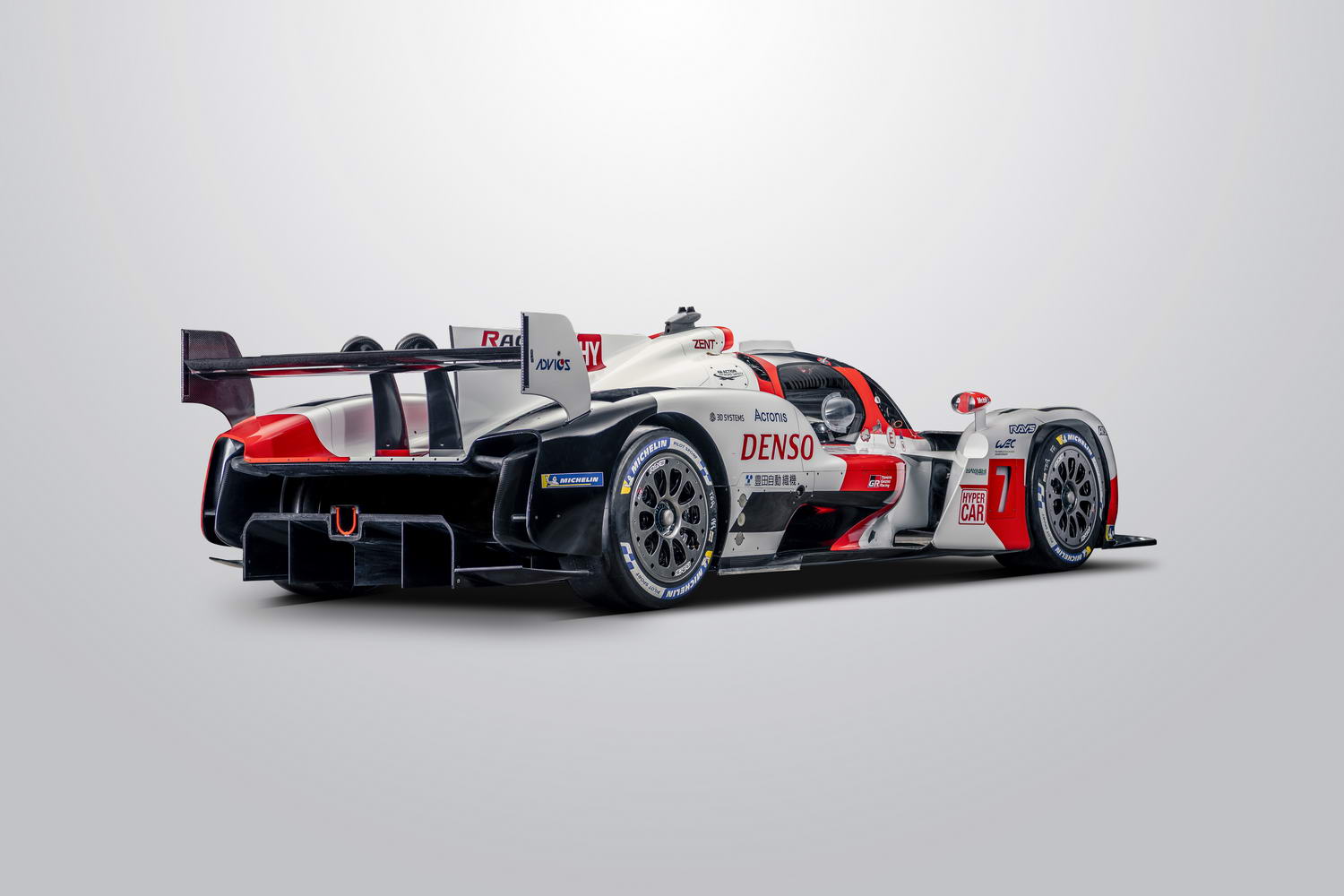 Toyota, having dominated the last three Le Mans 24hrs, is coming back for more tilts at French glory (not to mention world championship glory) with this new GR010 Hybrid racing car - GR standing, of course, for Gazoo Racing, Toyota's in house racing and tuning squad, who have also breathed their magic on the new GR Yaris hot hatch.

Designed to meet the new 'Hypercar' Le Mans regulations, the GR010, in spite of looking as mean and rapid as any front-line racer, is actually slower, heavier, and simpler than its TS050 predecessor. That's a deliberate outcome of the new rules for Le Mans, which have tried to make entry to Le Mans and the World Endurance Championship (WEC) much more affordable for both independent teams and big carmakers.

So the cars gain weight (this GR010 is some 162kg heavier than the old TS050), and mechanically simpler - it uses a single electric hybrid motor, mounted on the front axle. The TS050 had two, one for each axle. It's also much less powerful - the old TS050 produced nearly 1,000hp, but this new GR010 will be - as with all the new Hypercar class entrants - pegged to a maximum of 680hp.

The GR010's mid-mounted 3.5-litre twin-turbo engine produced 680hp all on its own, and the front-mounted hybrid motor makes an extra 272hp. That makes for a theoretical 952hp maximum, so the car's electronics will have to carefully parcel out power to ensure that the GR010 doesn't exceed the maximum allowable, all under the piercing gaze of the infamous Le Mans scrutinisers.

The new Toyota will also have to meet tough to aerodynamic rules, which stipulate that the car must use the same basic aero package at all tracks, whether at a high-downforce track such as Fuji in Japan, or the ultra-low-downforce Le Mans, with its endless straights. In common with the engine restrictions, the idea is to make the racing much closer and more competitive, and above all more affordable. Le Mans and the WEC were desperate to lure big carmakers following a major exodus of big names, leaving Toyota as the only big car maker competing.

That has certainly worked - this year, Toyota's GR010 will have to face off against the likes of the American Glickenhaus squad, and a team entered by Renault-owned Alpine, which is stepping up from the lower LMP2 category. There's much more to come, though - Peugeot, Audi, and Porsche have all confirmed Le Mans returns in the next few years, while Aston Martin remains an outside possibility.

In contrast to its rivals, who (Glickenhaus aside) are all developing purpose-built racing cars, Toyota is actually going to turn its GR010 into a road car. Well, actually it's the other way around. Toyota has actually developed a new road-going hypercar, called the GR Super Sports, which shares the GR010's engine and hybrid system. It then backwards-converted the Super Sports into the racing GR010 (more or less) creating a purpose-built racing car, based on a road car, which itself has been built based on cutting-edge racing car tech.

Pascal Vasselon, Toyota Gazoo Racing's Technical Director said: "The new regulations are designed to showcase road-relevant technology in WEC whilst also delivering a top-level, attractive spectacle. We are looking forward to welcoming new competitors and being part of an exciting future for endurance racing with our GR010 Hybrid. The new Le Mans Hypercar regulations mean the GR010 Hybrid is a completely new car, designed to a different philosophy. A major difference is the architecture of the hybrid system; we will have one kinetic energy recovery system and brake-by-wire, on the front axle. This means we had to install a starter motor and fully hydraulic rear brakes for the first time in our WEC project. Following the regulations, our car will have one bodywork specification to handle all circuits, so we needed to provide a wider working window for this car. These are just examples; there have been many such differences and challenges to address during development, so it has been an interesting engineering challenge. Now we are all looking forward to continuing our testing programme and finally seeing our new car compete; I think it will be worth the wait."

There's also a little grudge to be settled. Toyota's No.7 car, crewed by Kamui Kobayashi, Jose Maria Lopez, and Mike Conway, has suffered the worst possible luck at Le Mans over the years, and the three drivers - jointly the 2020 WEC champions - want some payback with the GR010. "This is a challenging new project. We are racing in the same championship but with a different type of car and against new competitors; it's always fun to be at the beginning of such a story" said Kobayashi. "I really like the concept of hypercar and the GR010 Hybrid; it's great to be part of a project to bring Le Mans performance into a road car. The objectives and the requirements don't change. We are racing to win and as drivers we have to be fast and consistent, even more so considering the balance of performance; we cannot make mistakes. Personally, my number one target this year is to win Le Mans after such bad luck in the last few years. All the mechanics and engineers on car No.7 deserve to win Le Mans."