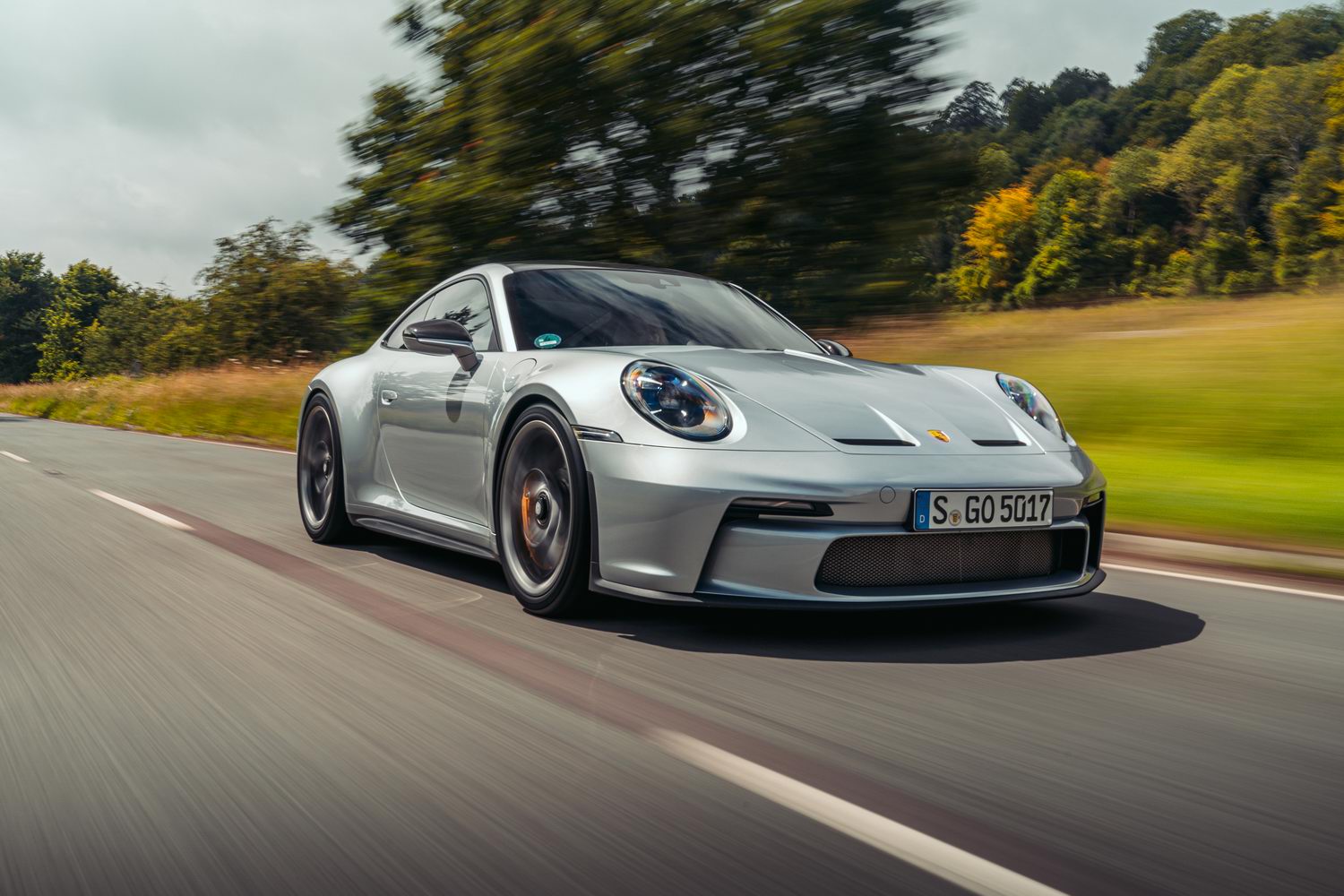 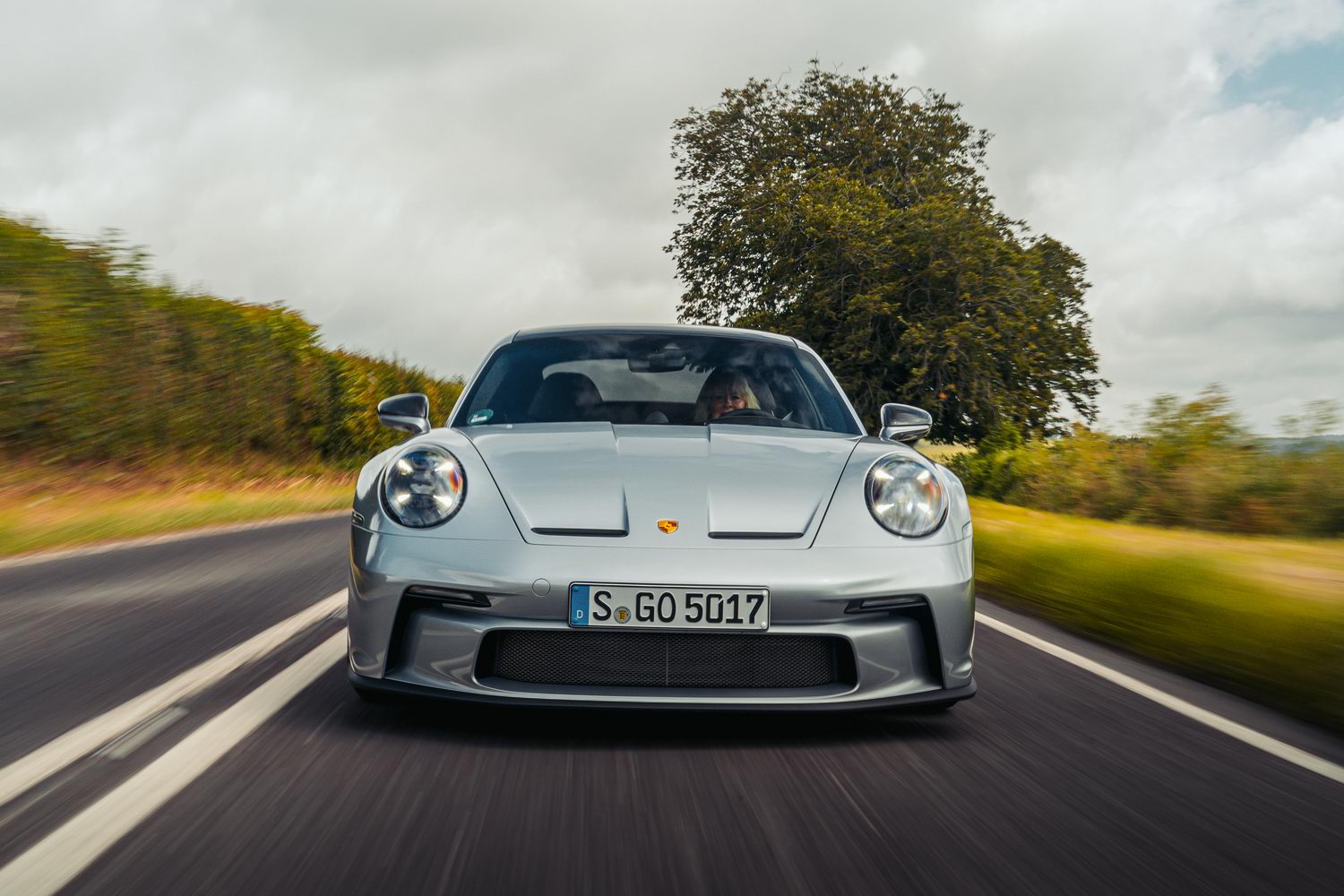 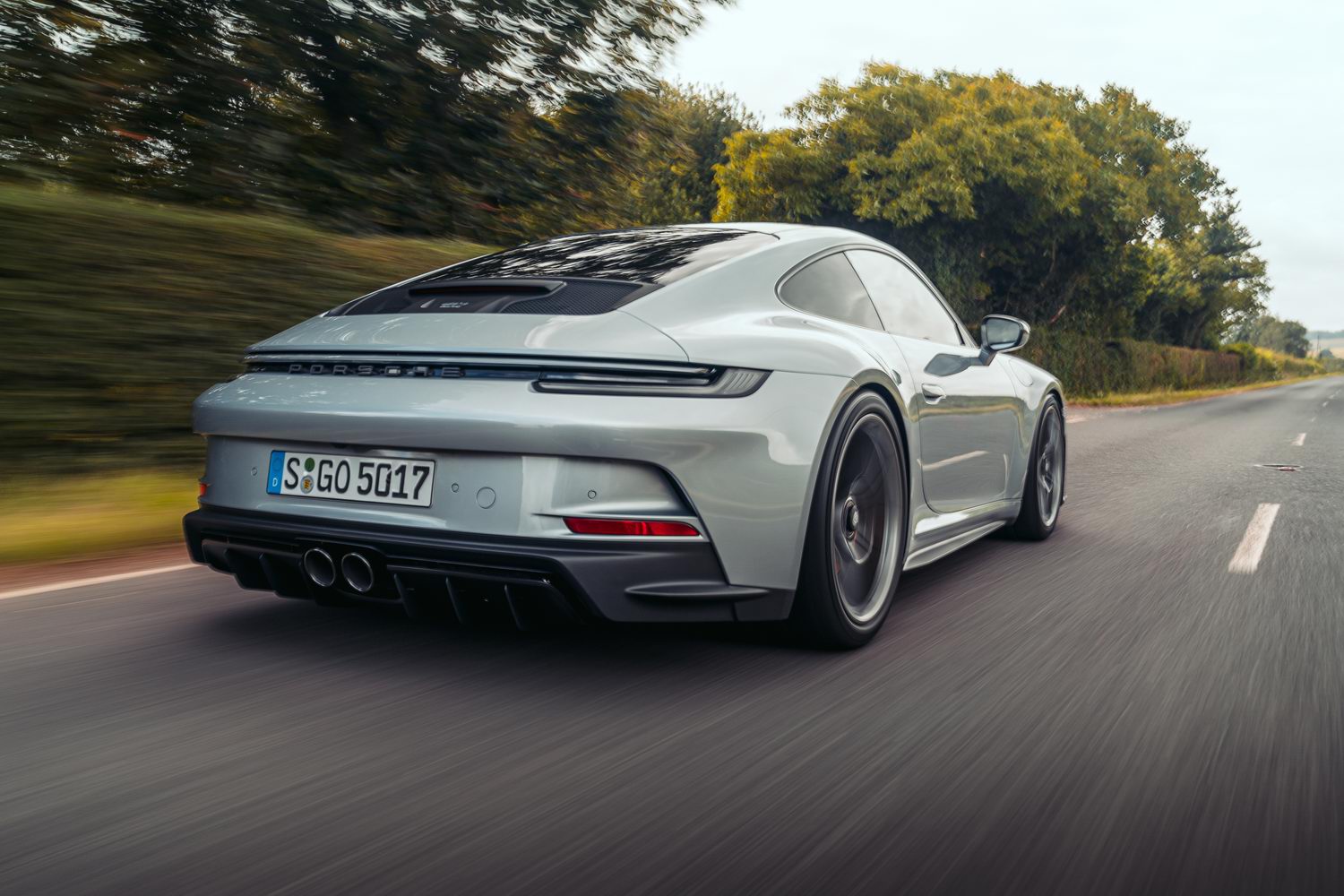 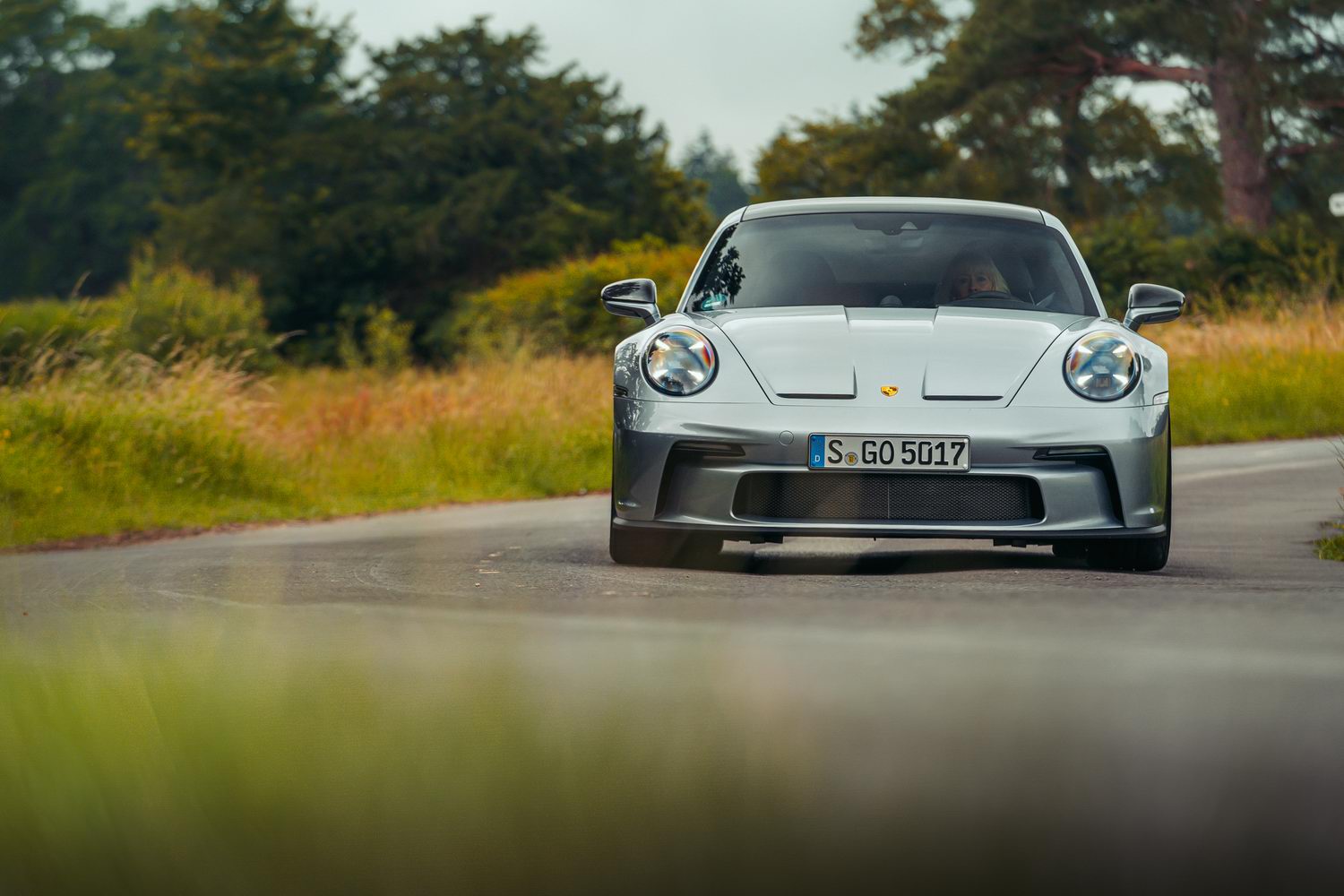 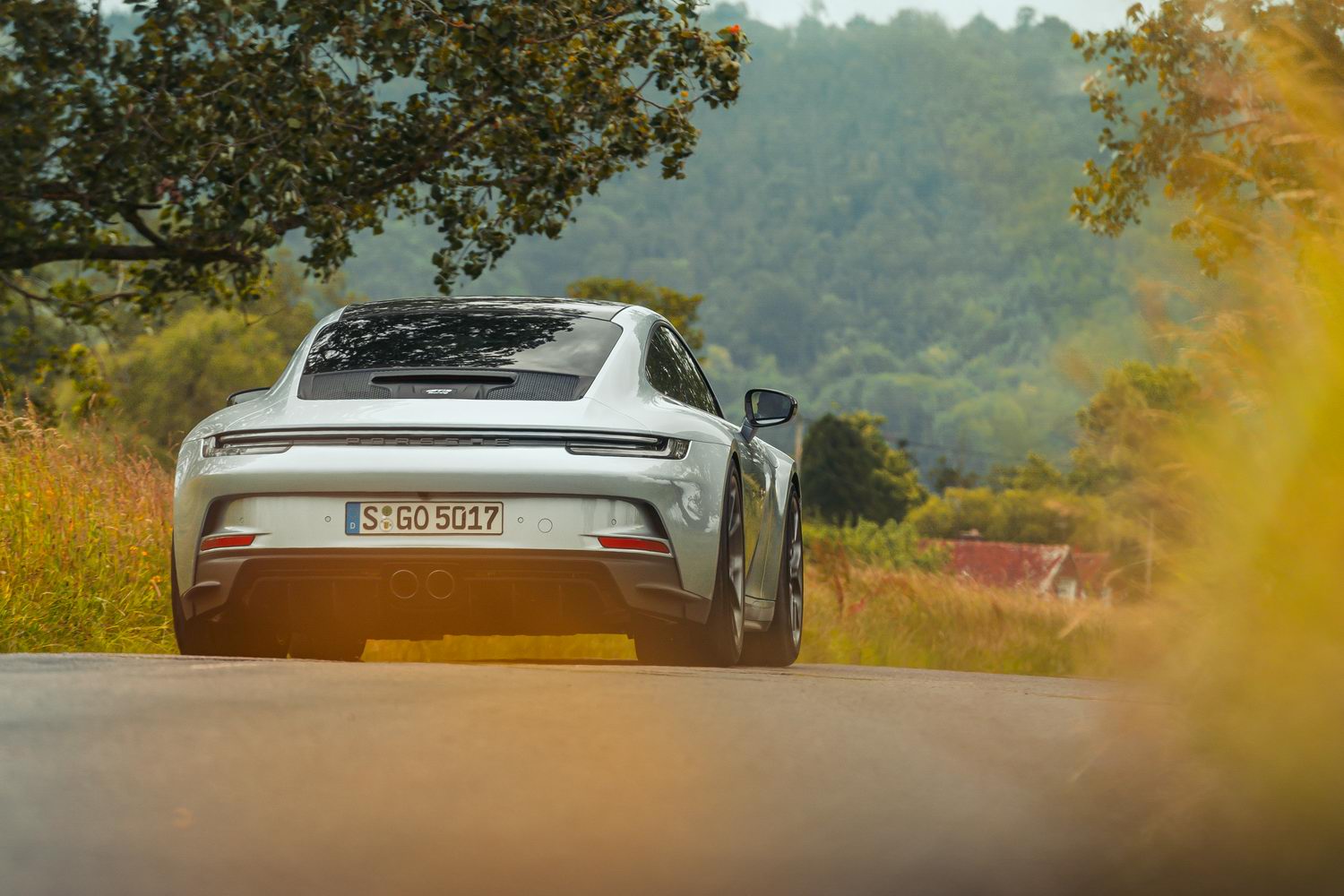 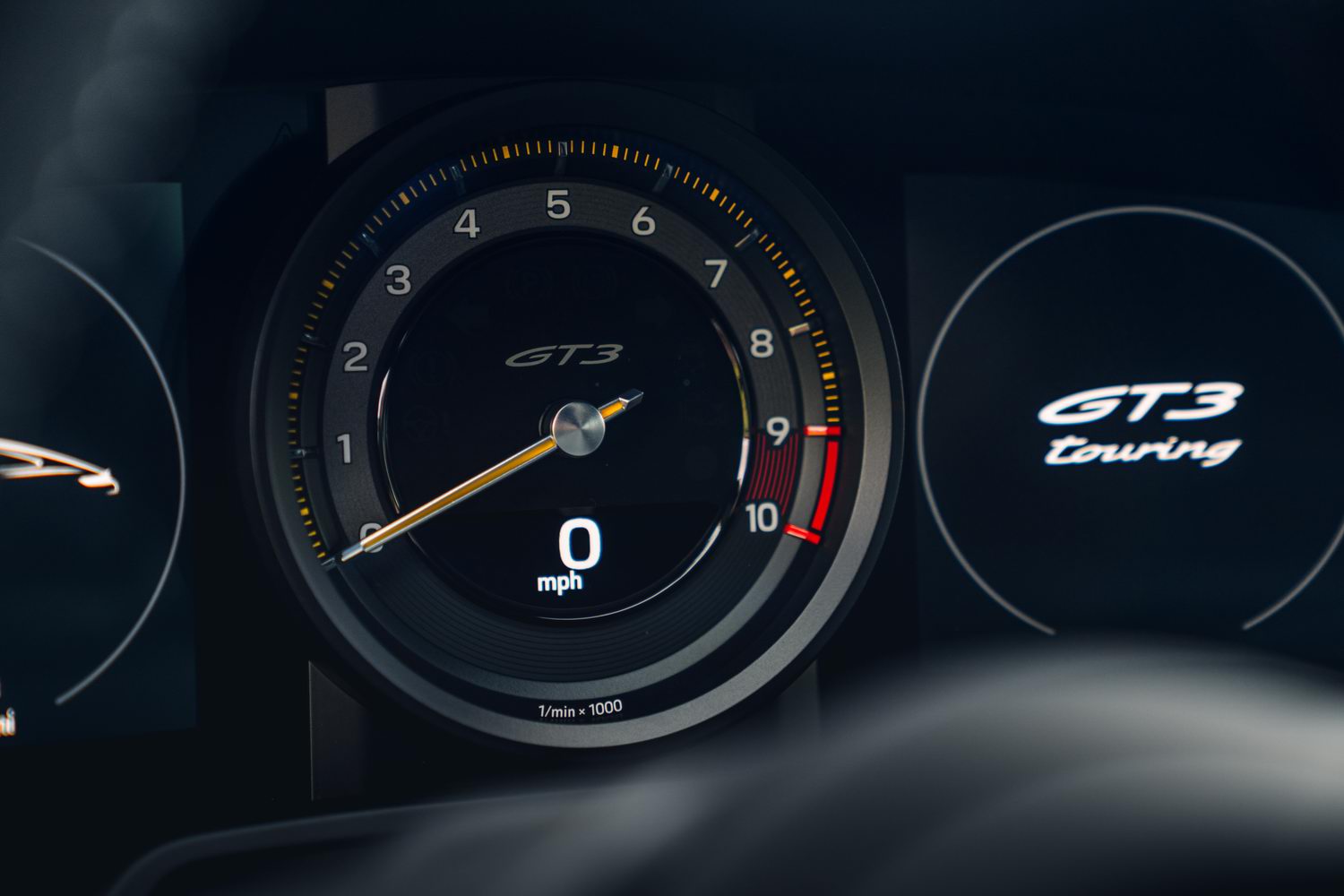 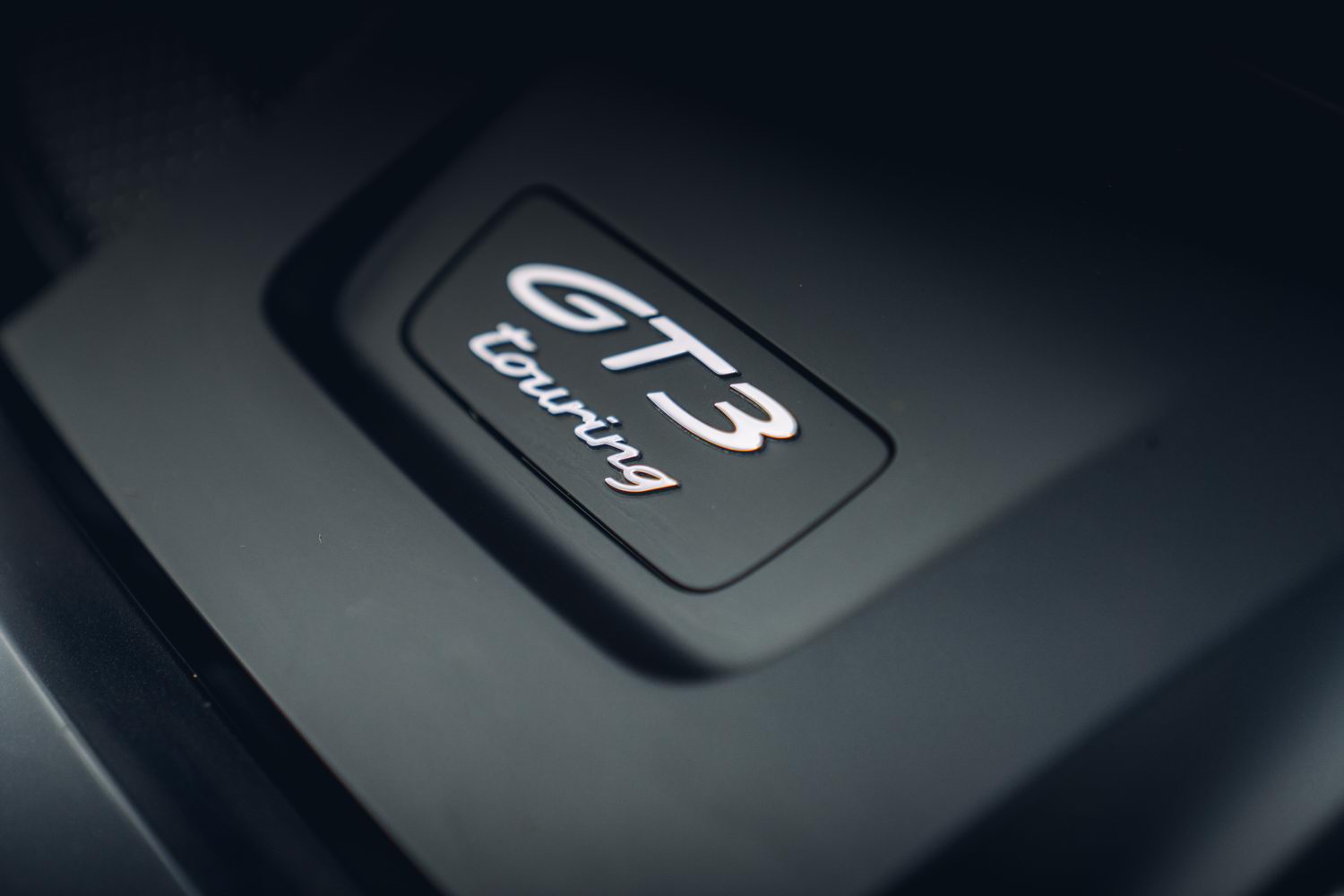 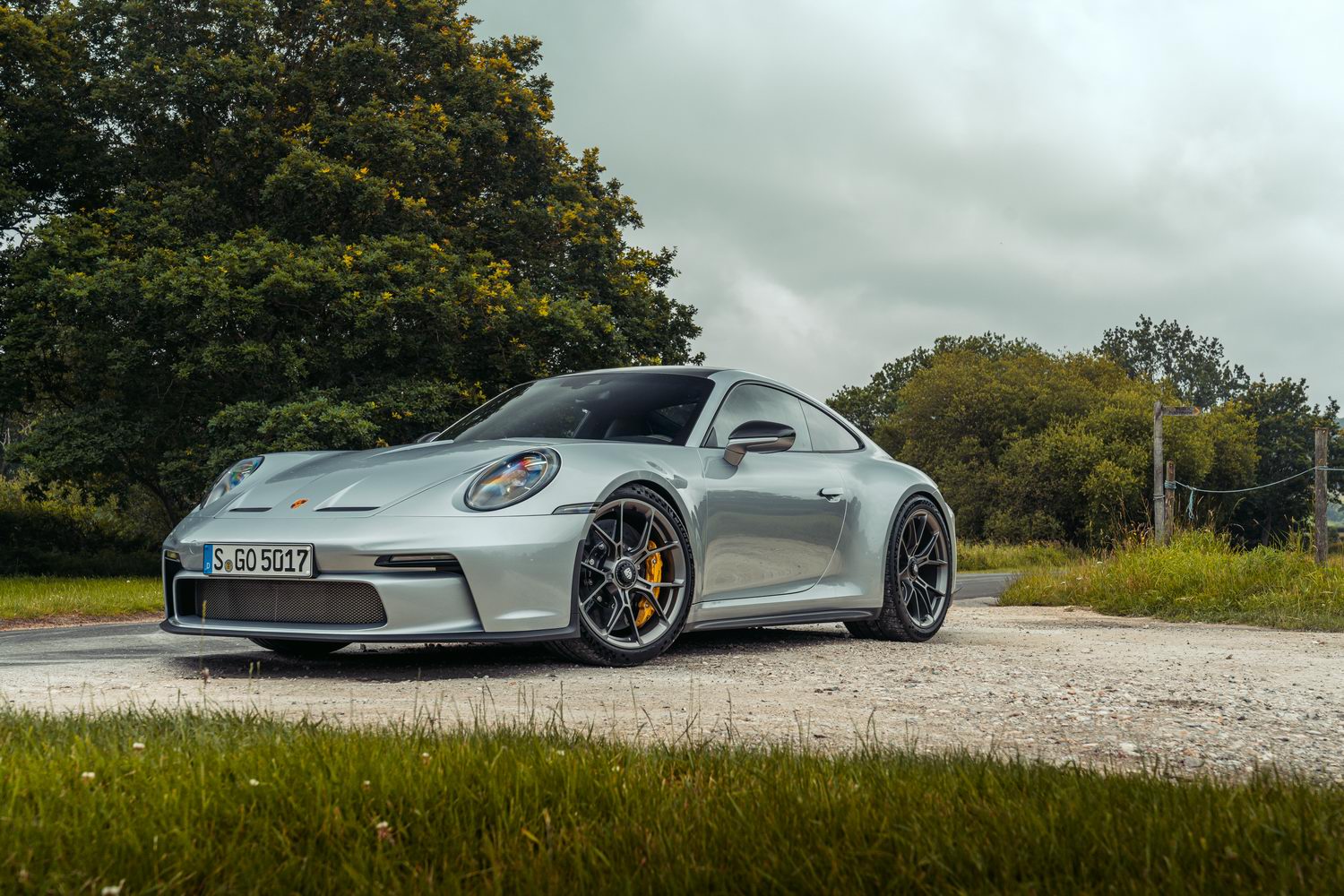 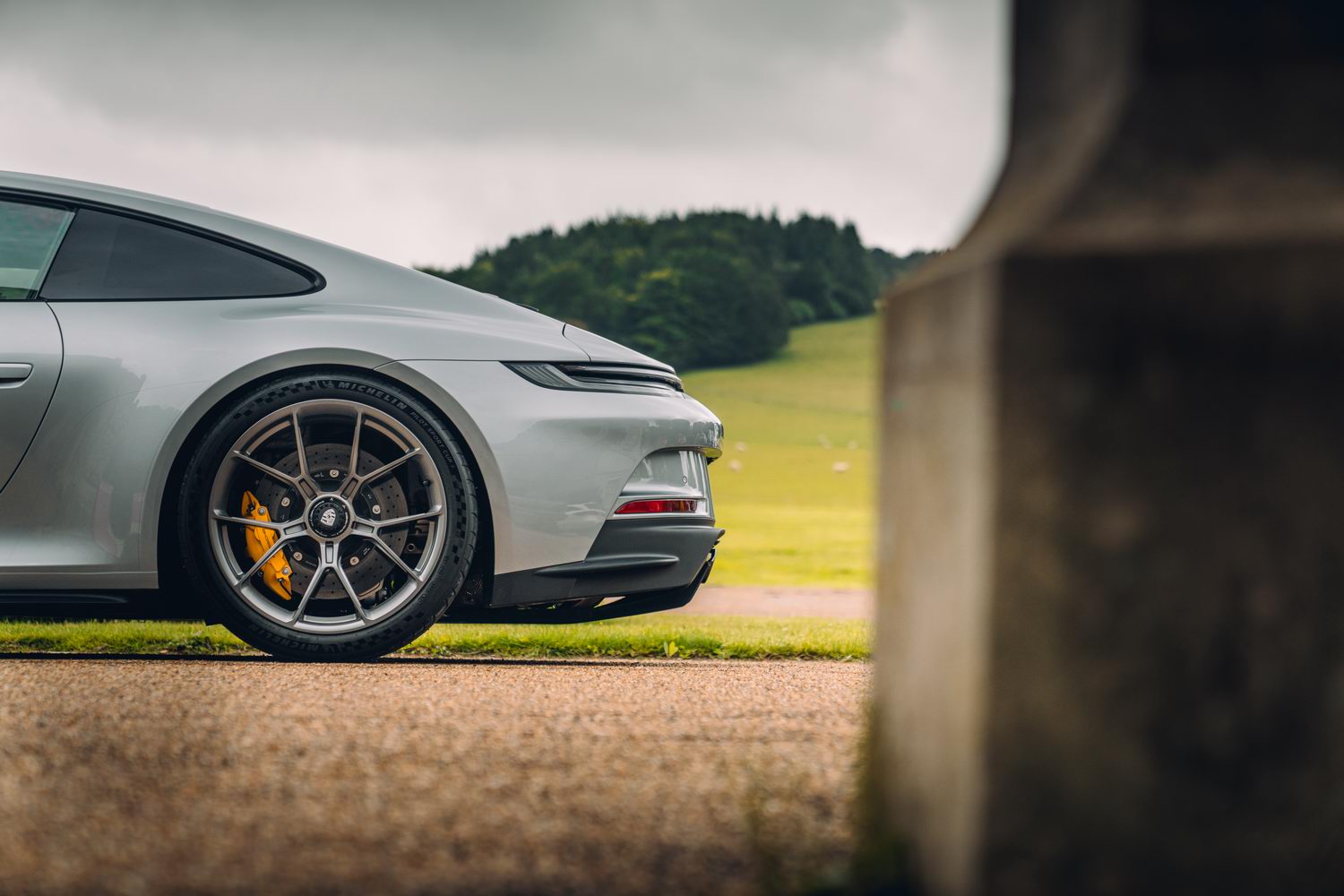 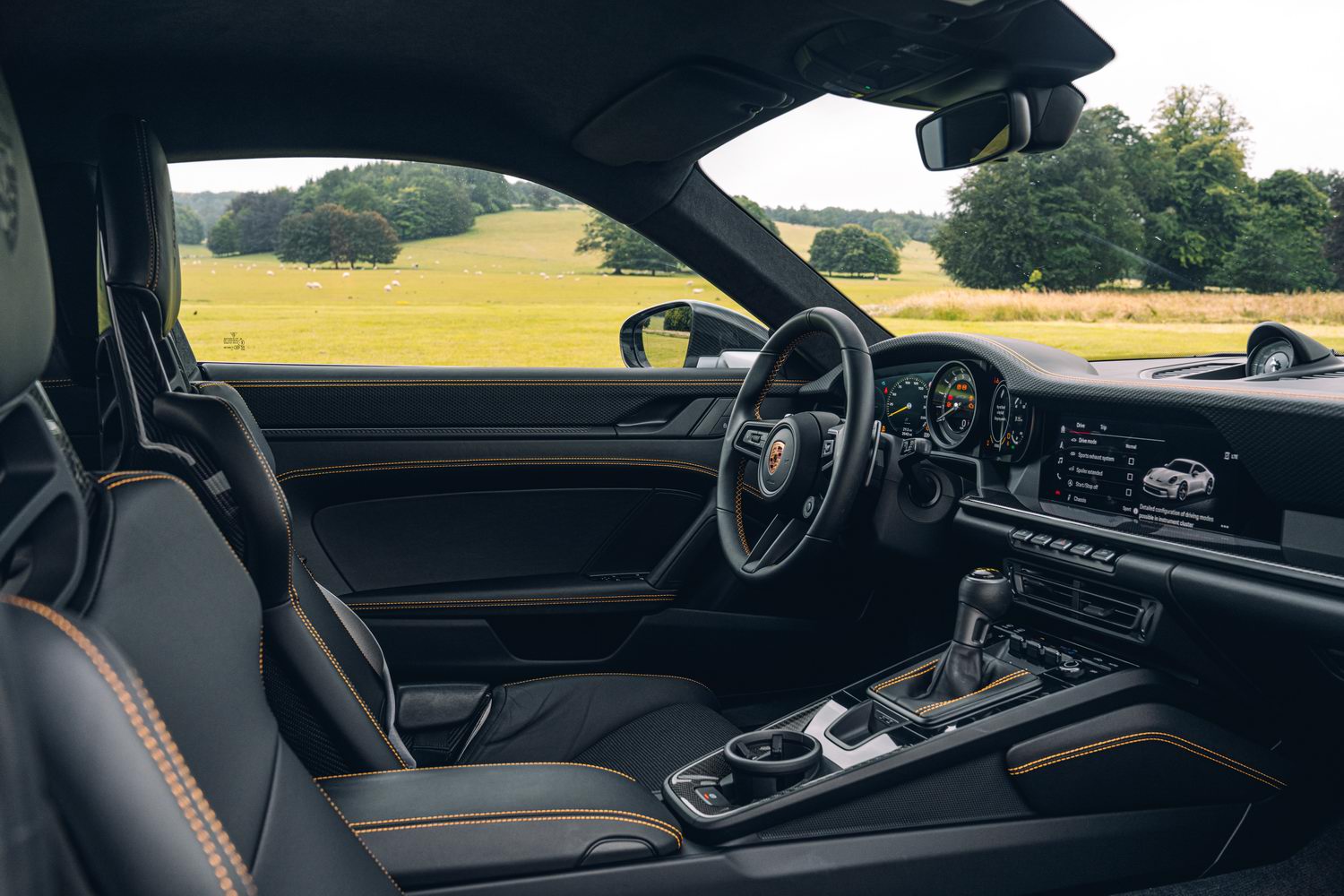 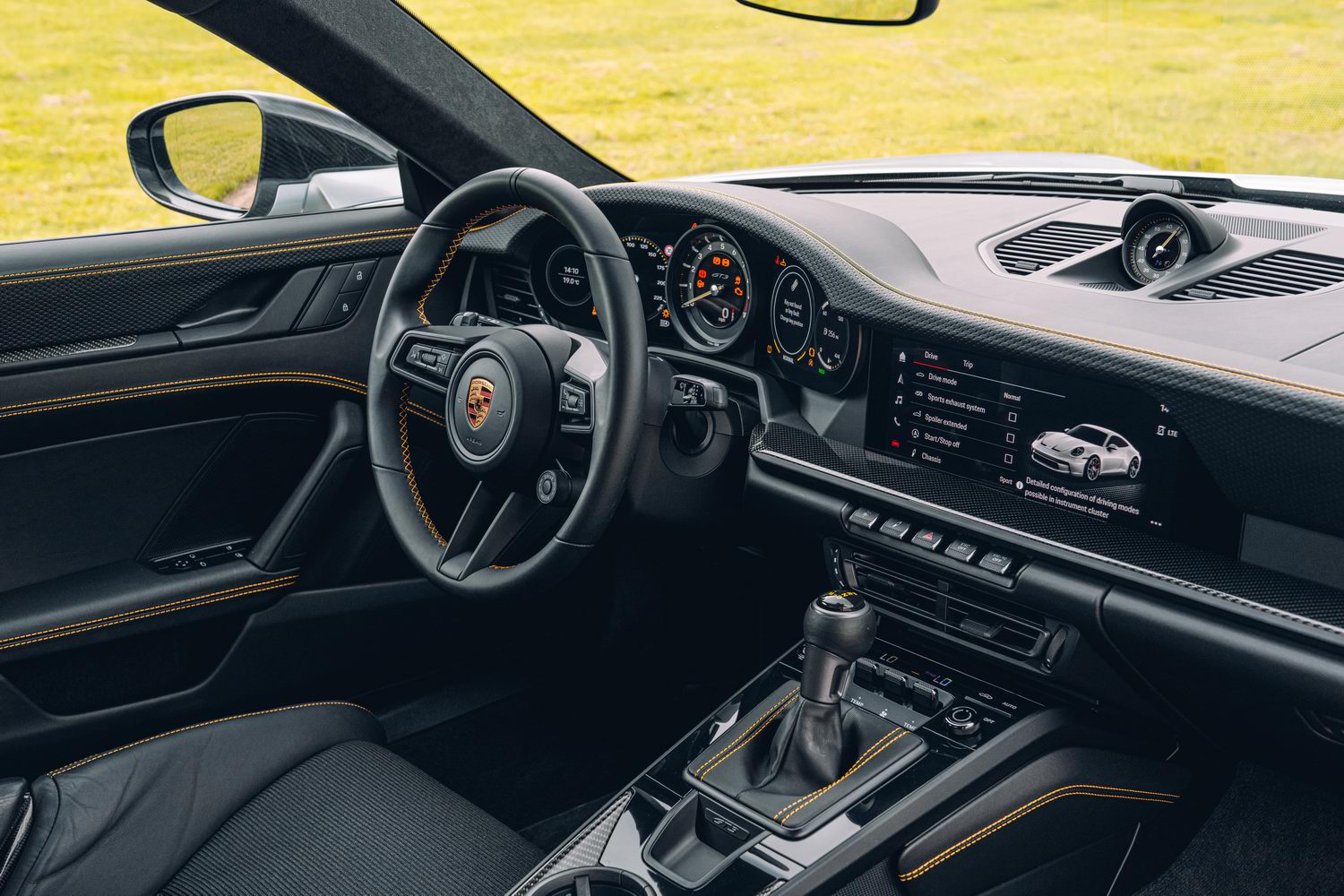 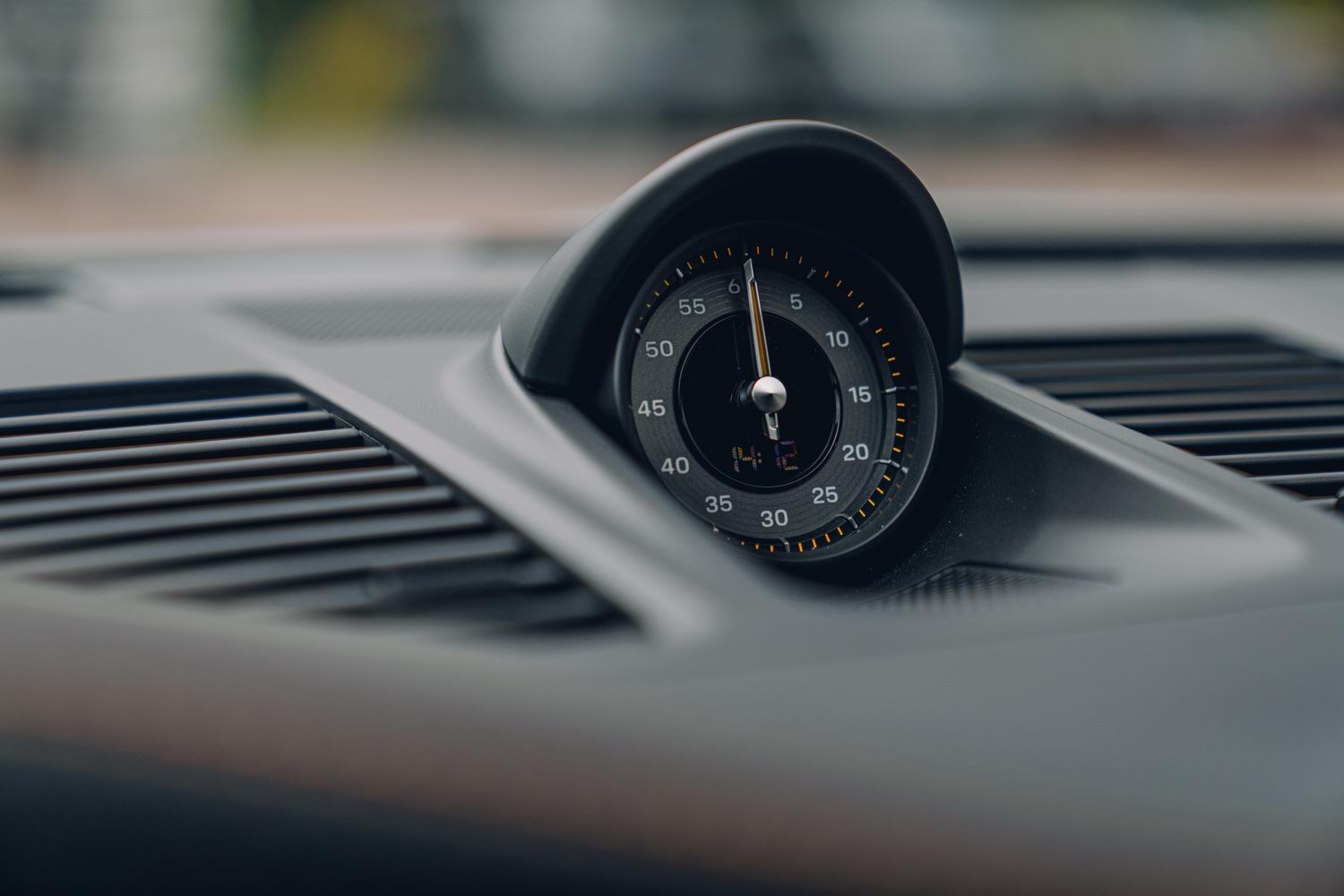 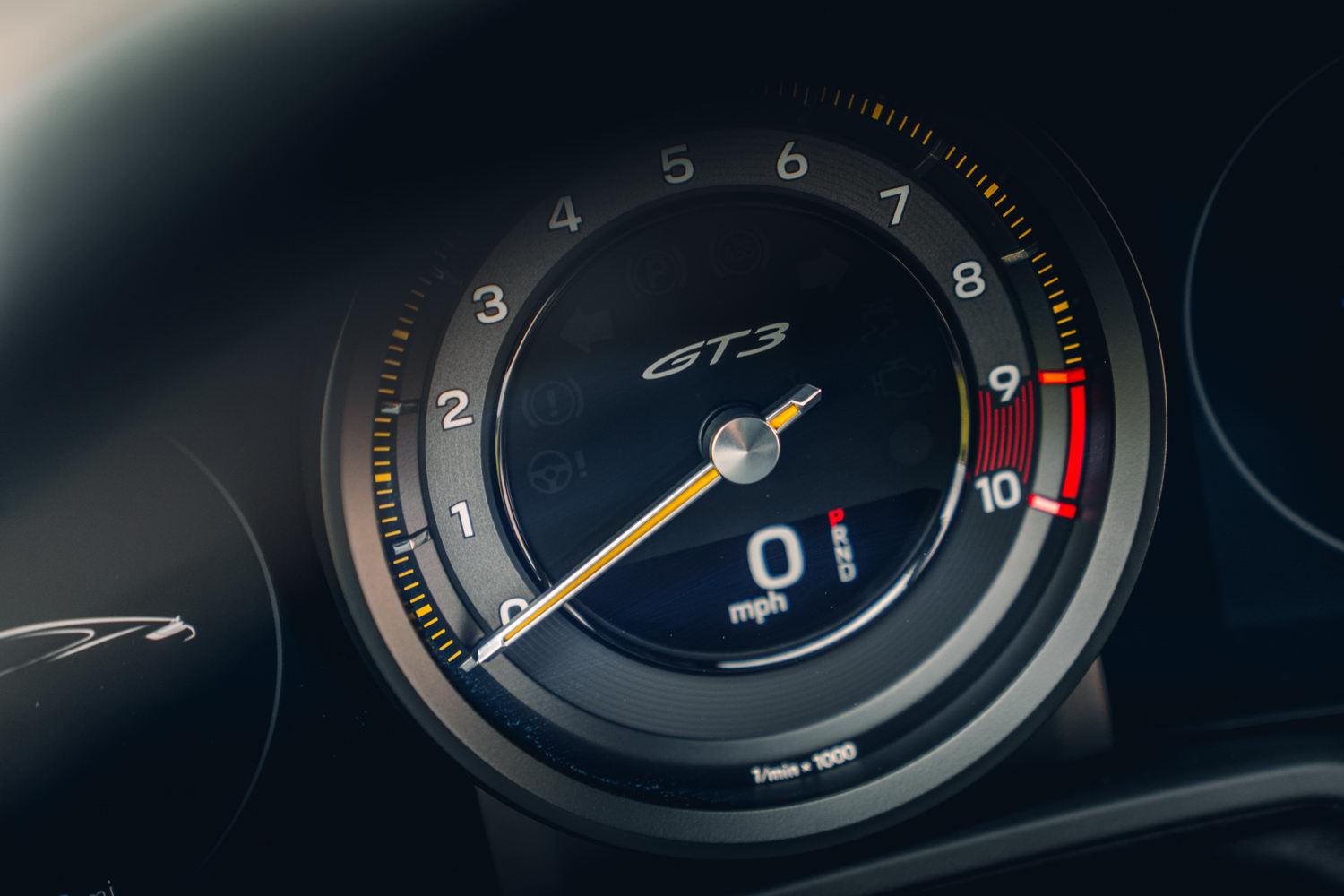 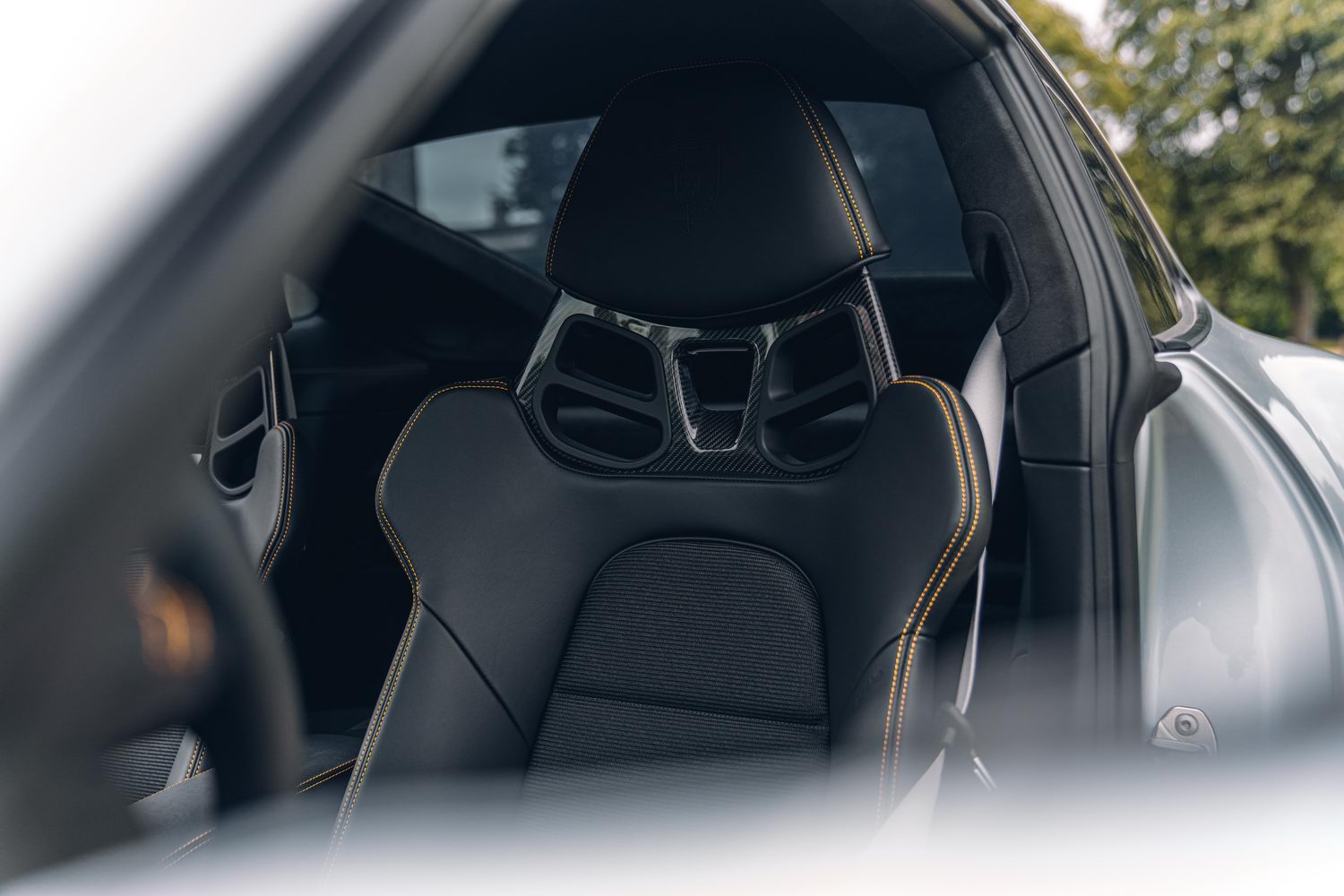 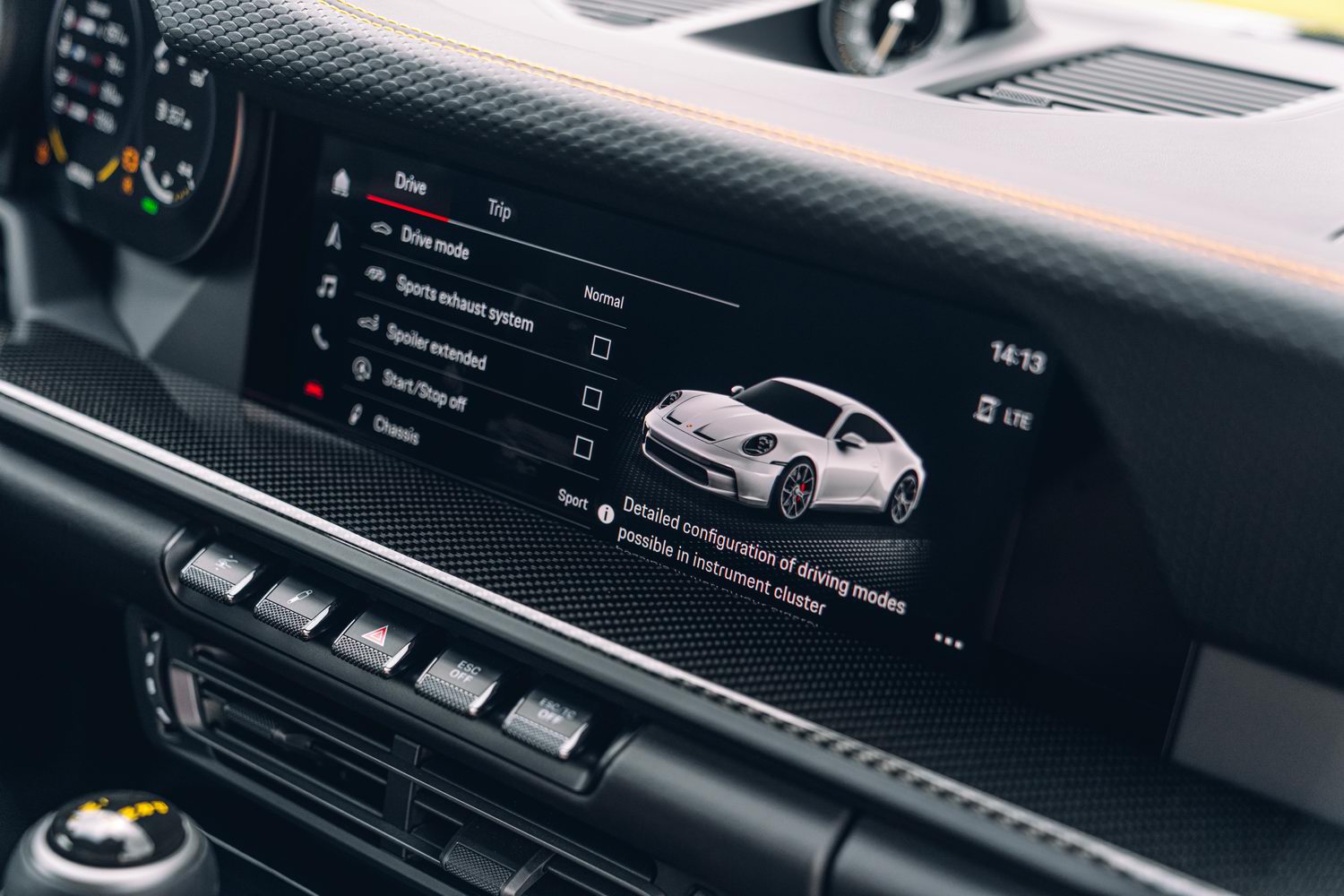 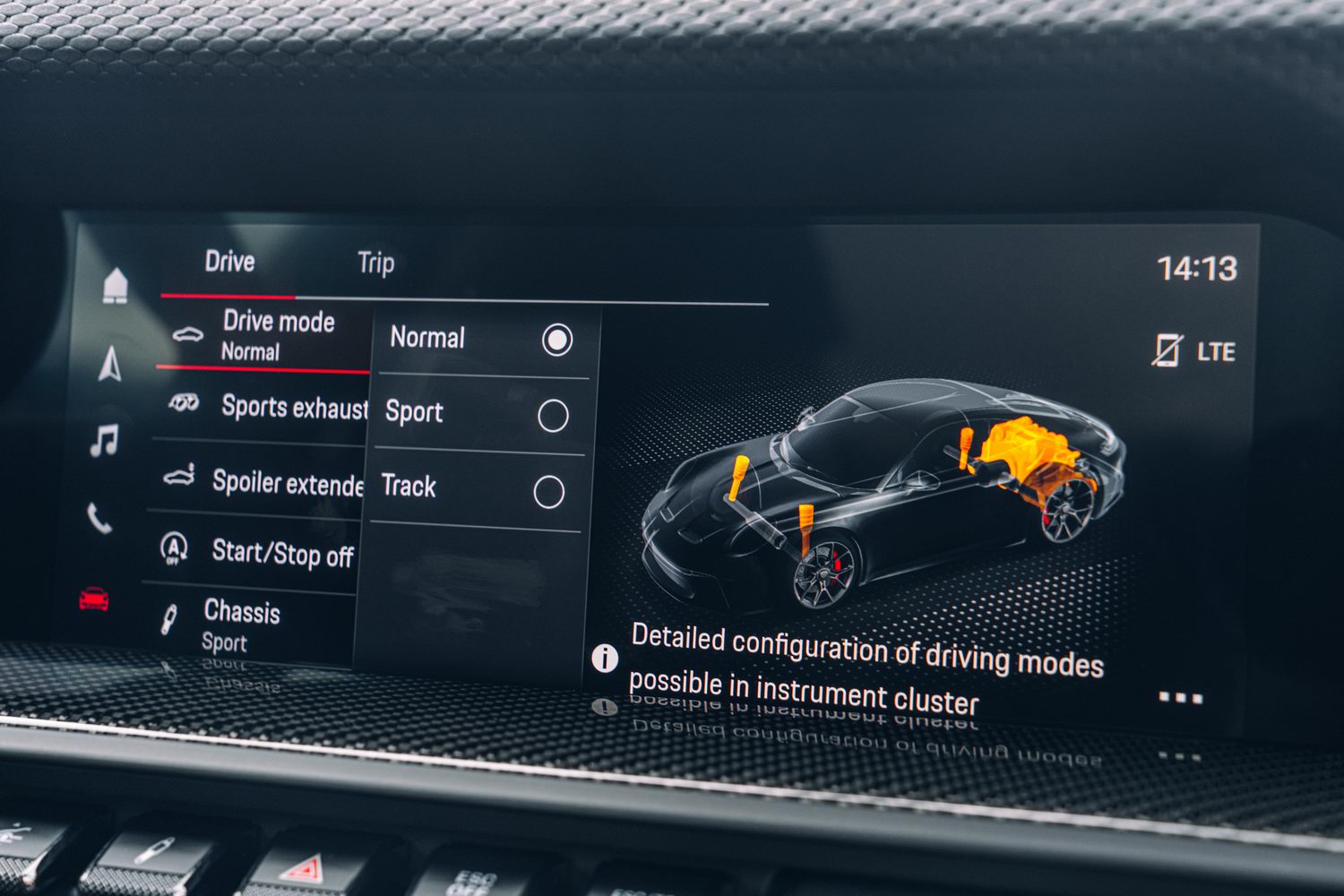 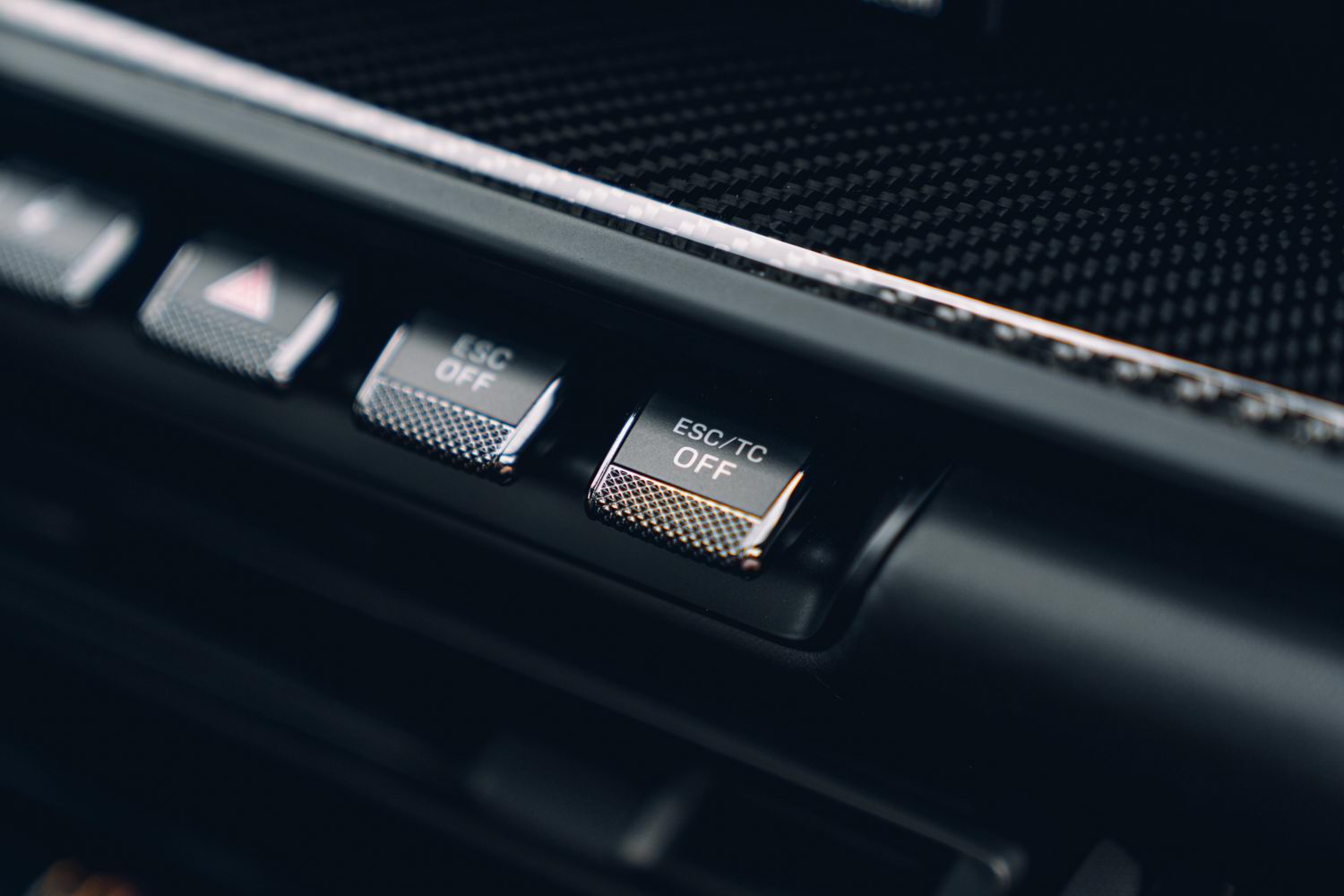 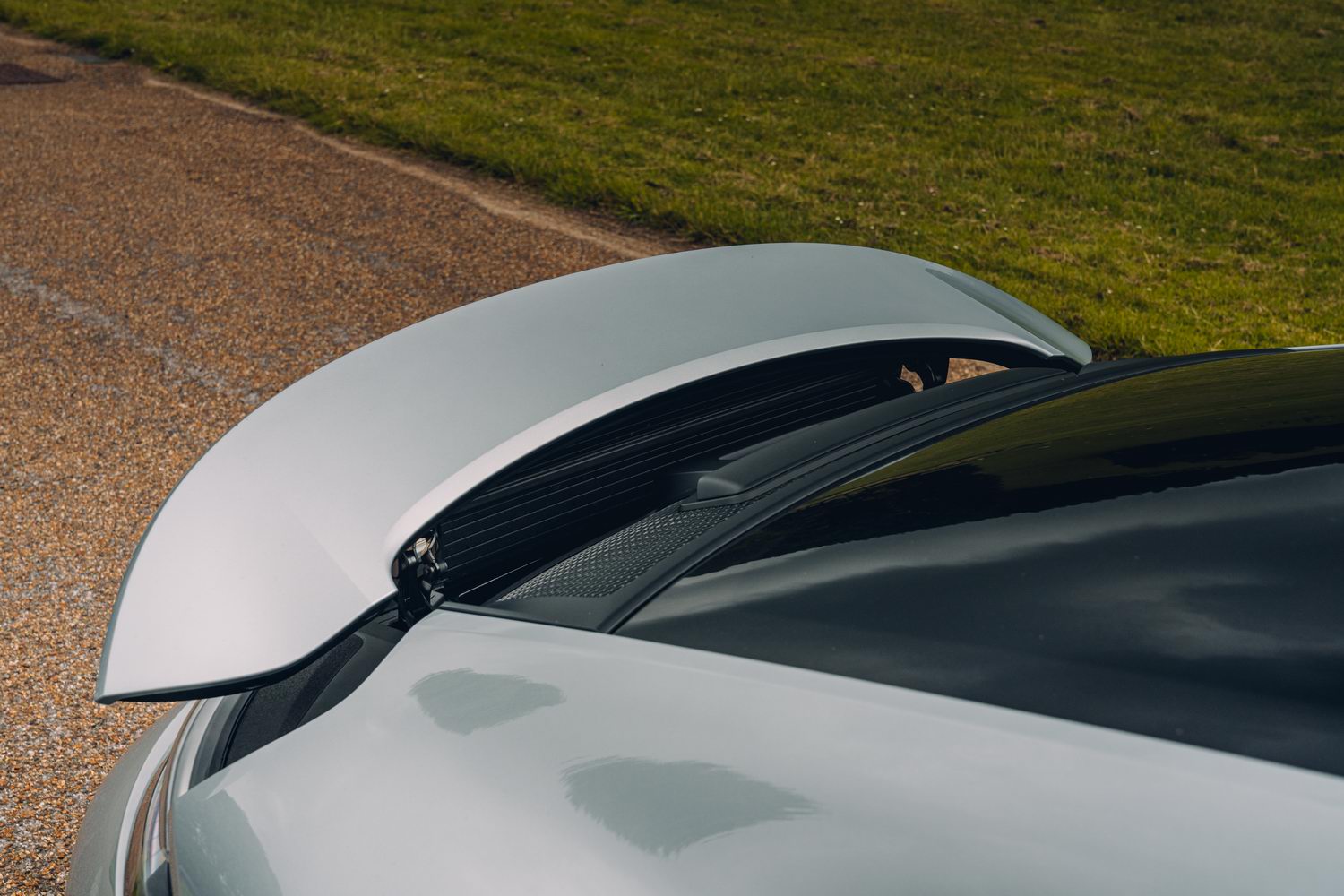 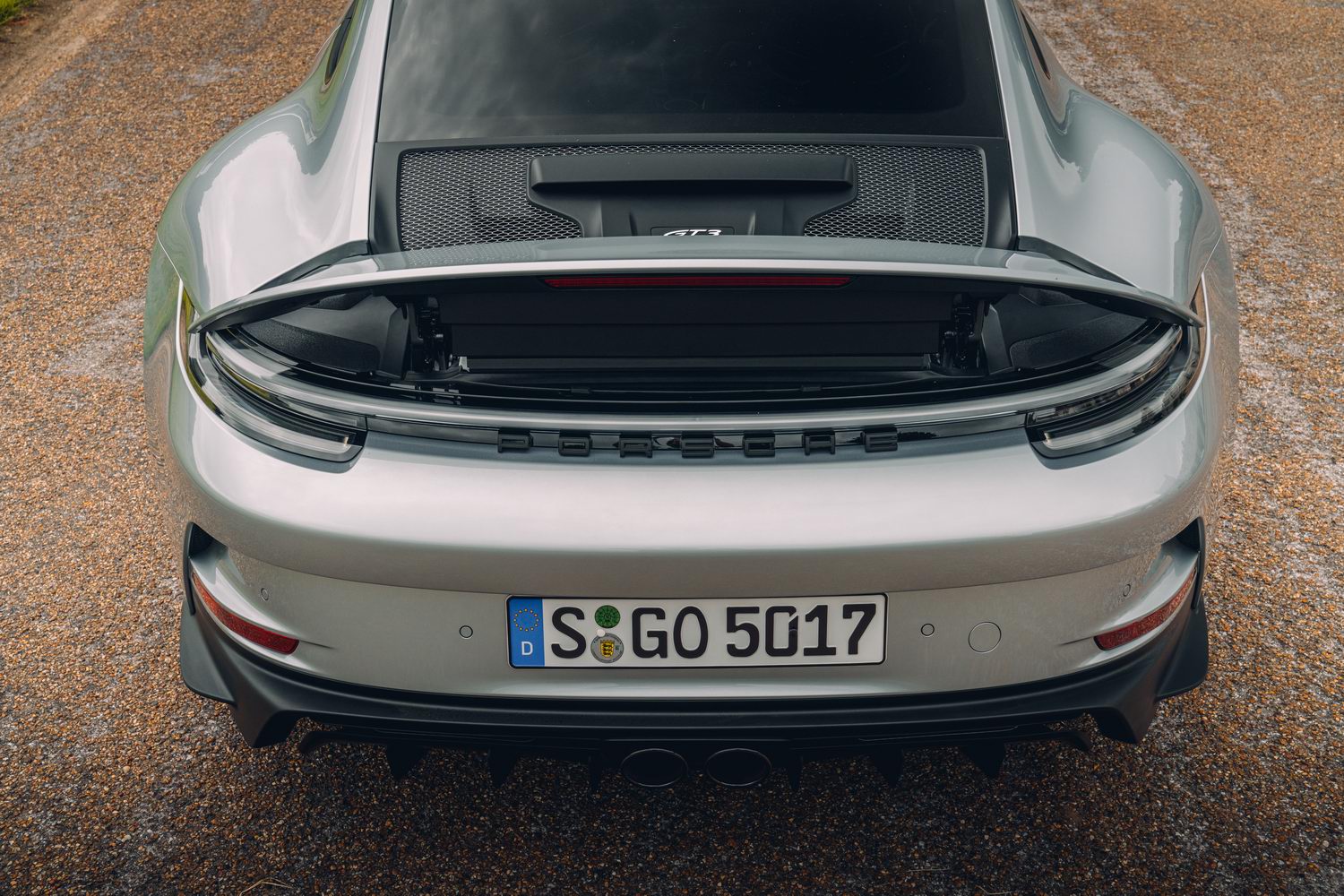 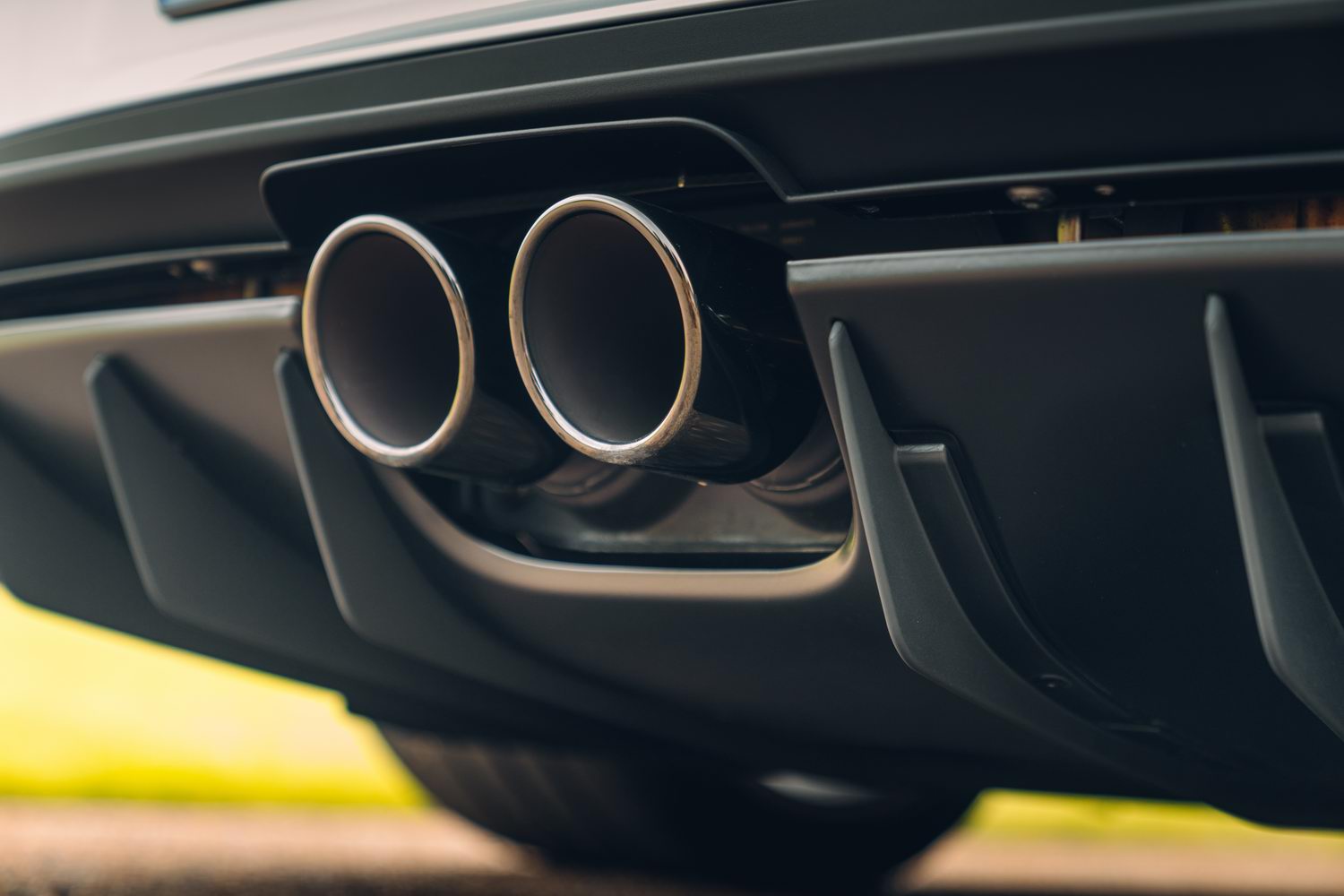 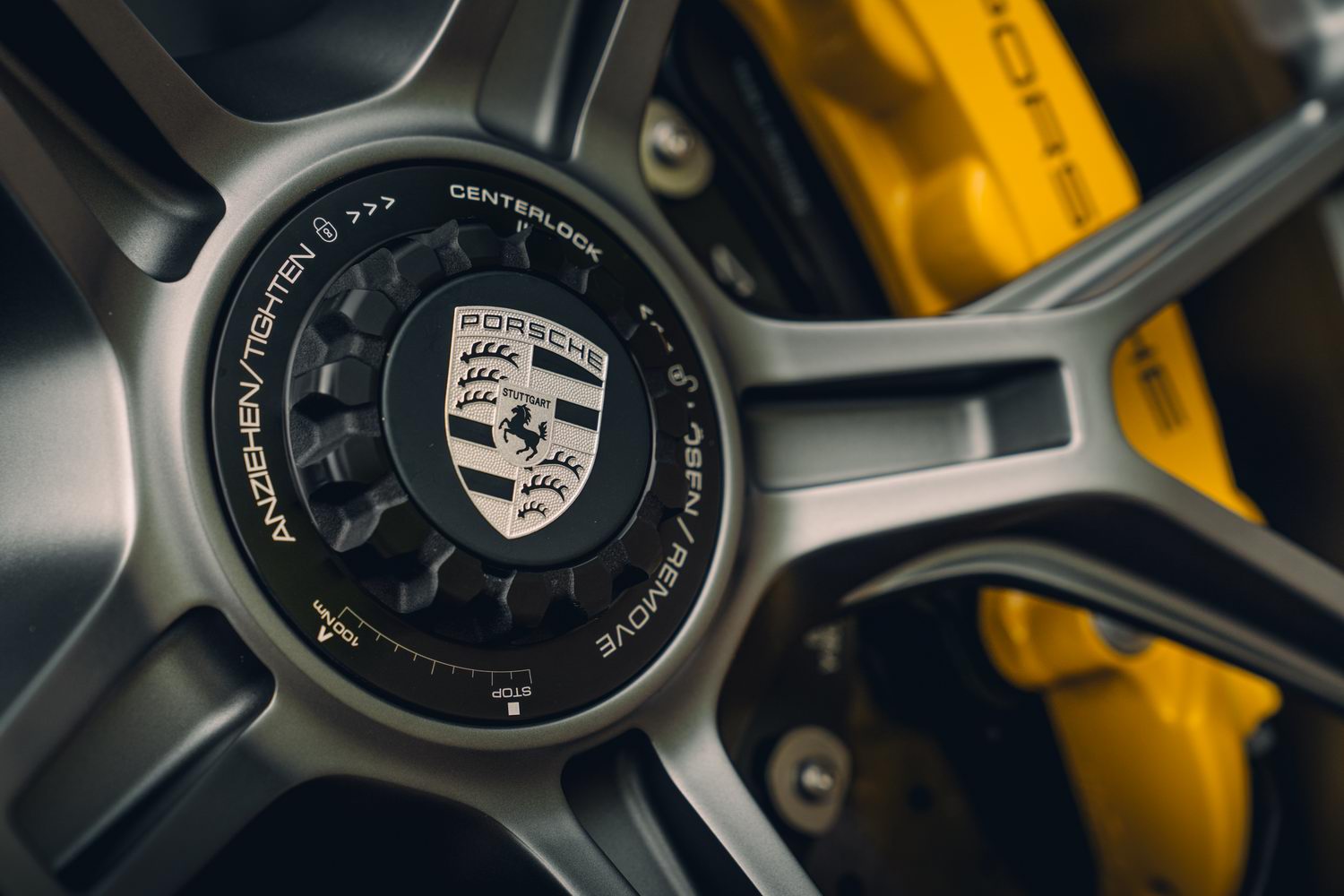 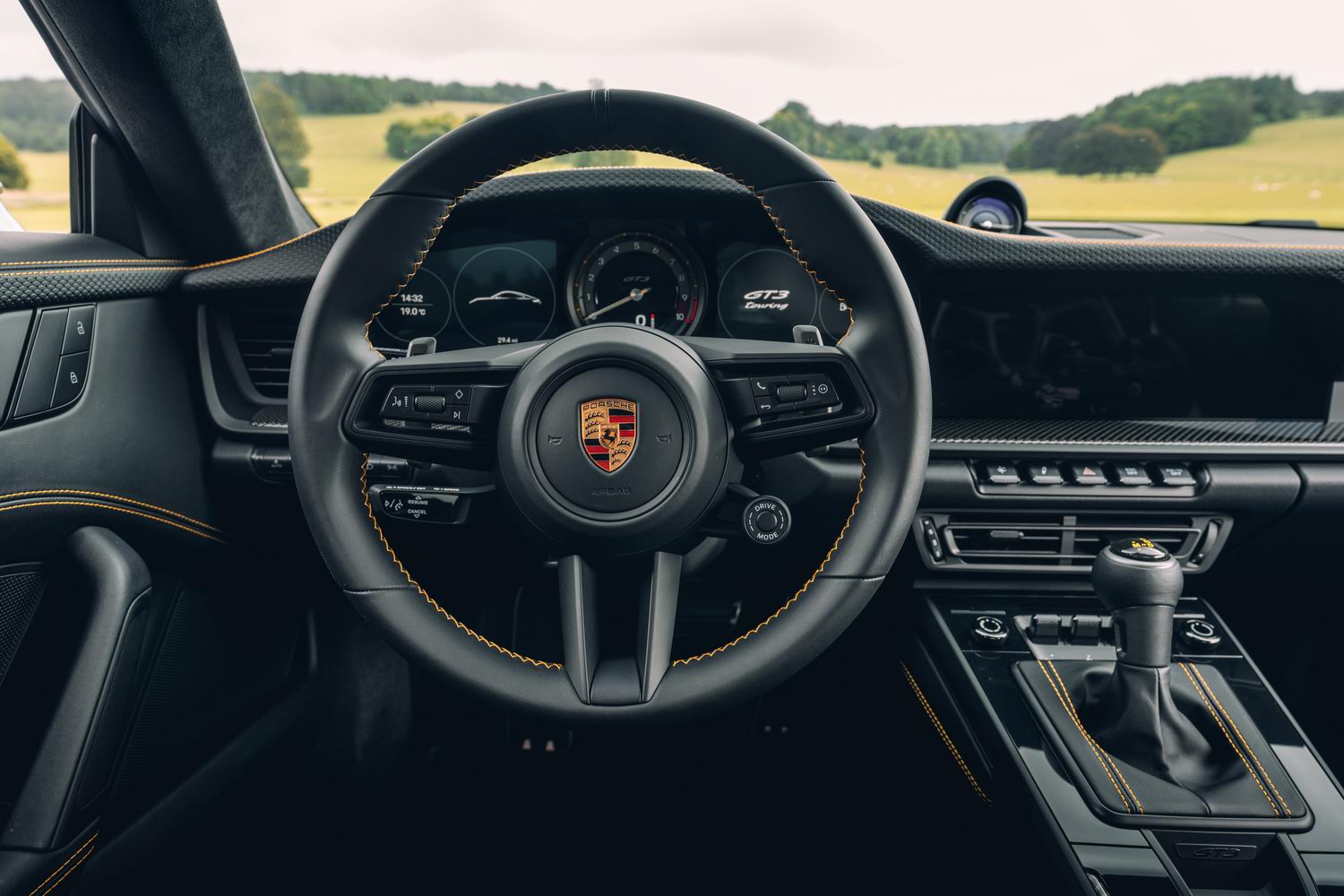 Is the Porsche 911 GT3 Touring really toned down, or is it simply stealthier?

If you think big wings belong on aircraft or Formula 1 cars then the new Porsche 911 GT3 Touring could be just what you're looking for. It's perfect for those who want the best of the best but want to be just a little under the radar, to be more stealthy, more discreet but still to appreciate that subtle nod from those who know. Enter the Touring version, a name first applied to a 911 in the early 1970s and which now means a model that is less extrovert but definitely no less dynamic.

You know that massive rear wing on the regular 911 GT3? Well there isn't one on the Touring. Instead it has a discreet extendable spoiler like other 911 models, so no-one can put their coffee cup on it in the car park. Other items unique to the Touring include a tailgate grille with the GT3 Touring badge, while the Porsche logo across the rear is light silver, as are the exhaust tips, and the window surrounds are in anodised aluminium.

Inside it's all less Silverstone and more Monaco. The sports seats are leather and cloth instead of Race-Tex, and leather is used on the steering wheel, gear lever, door trim inserts and centre console armrest. Brushed black aluminium is used for the door sill protectors and dashboard trim strips.

The model we drove was left-hand drive, straight from the factory and sporting German plates. It was also equipped with a few nice extras including the Dolomite Silver paintwork, carbon fibre reinforced plastic (CFRP) roof, black detailing to the Touring package, Satin Darksilver wheels and a few Race-Tex interior elements such as the roof lining and seat belt trims.

It has all the looks that will make someone say it looks non-standard, but they can't quite put their finger on why. It's also comfortable inside, with all the latest Porsche stuff you would expect, from an easy to use 10.9-inch touchscreen Porsche Communication Management system and scrollable information screens in the instrument cluster to the cupholders for driver and passenger and a convenient place to store your phone in the armrest. It's all rather pleasant, but don't be fooled: this is still very much a GT3 at heart.

When we drove the full-fat GT3 it was raining and we were on a track. Not so for the Touring, with a sunny day near the Goodwood estate in England and some fabulous roads to get to grips with it on. And get to grips with it we did, because the GT3 Touring relishes being pushed. At the risk of overdoing cliches, it's a symphony of engineering and components all working together to create the most incredible experience you can imagine. It's motoring nirvana, heaven on four wheels, it's - no that's it, we're done, you get the picture.

The fact is though that, as with previous generations, the GT3 is a phenomenal thing. Yes, the paddles are too far away from your fingers to make them really usable, but the PDK gearbox is so good that we can defend that and besides, if you want the feeling of changing gears, use the gear stick and go all racing car sequential shift style. It gives you a real feeling of being more involved, more in tune with the car and you also get to truly experience the way the engineers have tapped into the laws of physics and made the whole car feel as though it pivots around the gear stick itself. Granted, you can have it with a six-speed manual gearbox, but it could well be that we are saying the PDK is just as good.

Save-the-manual campaign allegiances aside, the GT3 Touring was astonishing on the roads we took to. The driving position is spot on, and the leather-clad steering wheel feels as though it was designed to be an instrument of control and not just something that you have to use to turn the front wheels.

Peak power is the same as in the winged GT3 at 510hp, with 470Nm of torque, and that fantastic flat-six engine redlines at a heady 9,000rpm. Maximum power comes in at 8,400rpm and peak torque reaches the rear wheels at 6,100rpm. Figures only tell part of the story though.

On the road, it is as planted as they come, the new double wishbones up front that come from the 911 RSR race car proving to be way more compliant over bumpy back roads. The steering is surgically precise, but it's also twitchy, requiring constant input from the driver as the communication between the tarmac, components and human all seamlessly interact. The engineers could have made it slightly less involved, but we're glad they didn't because it provides that feeling of really being in control of the car, of having to master not just its power but its temperament too. It is the antithesis of everything that looks to be coming down the road when it comes to automation and relinquishing control.

Porsche promised that the new suspension set-up would ensure more contact over bumps and crests, which unlike on the track, we can now attest to. In spite of mid-corner bumps the GT3 Touring stuck to the tarmac, the sound of loose stones flicking off the Michelin Pilot Sport Cup tyres. Optional Porsche Ceramic Composite Brakes were fitted, too, clamping down confidently on request.

In all honesty we could go on for ages about how good this thing is, an engineering masterpiece, an antidote to sports cars that are over-reliant on technology, that pander to the instant gratification generation, but we won't. What we will say is that where we were expected to turn around and come back, we turned left and kept going, searching out new roads, with more bends, more undulating tarmac, more challenges and more rewards. Reluctantly we did eventually turn back, but it was with the realisation that this is not just a GT3, it's a GT3 Touring and that's the best of all worlds.

The GT3 Touring is priced at €231,041, the same price as the one with the big wing. It's the same price whether you go for the PDK or the manual and of course there are plenty of options to choose from to make it more your own. You can also go even further by adding in some Porsche Exclusive Manufaktur equipment too. For those that can afford and appreciate such extravagances, it's a veritable bargain.

There will be those who dismiss the new 911 GT3 Touring as not being the real deal; after all, the name GT3 comes from the racing category created in the late 1990s. But they'd be wrong. It has all the characteristics of the be-winged version, the same temperament and, unless you're after Nürburgring lap times, pretty much the same performance. Underneath its slightly more discreet design, it's every bit the GT3 and for some that will make it the best GT3 of all. 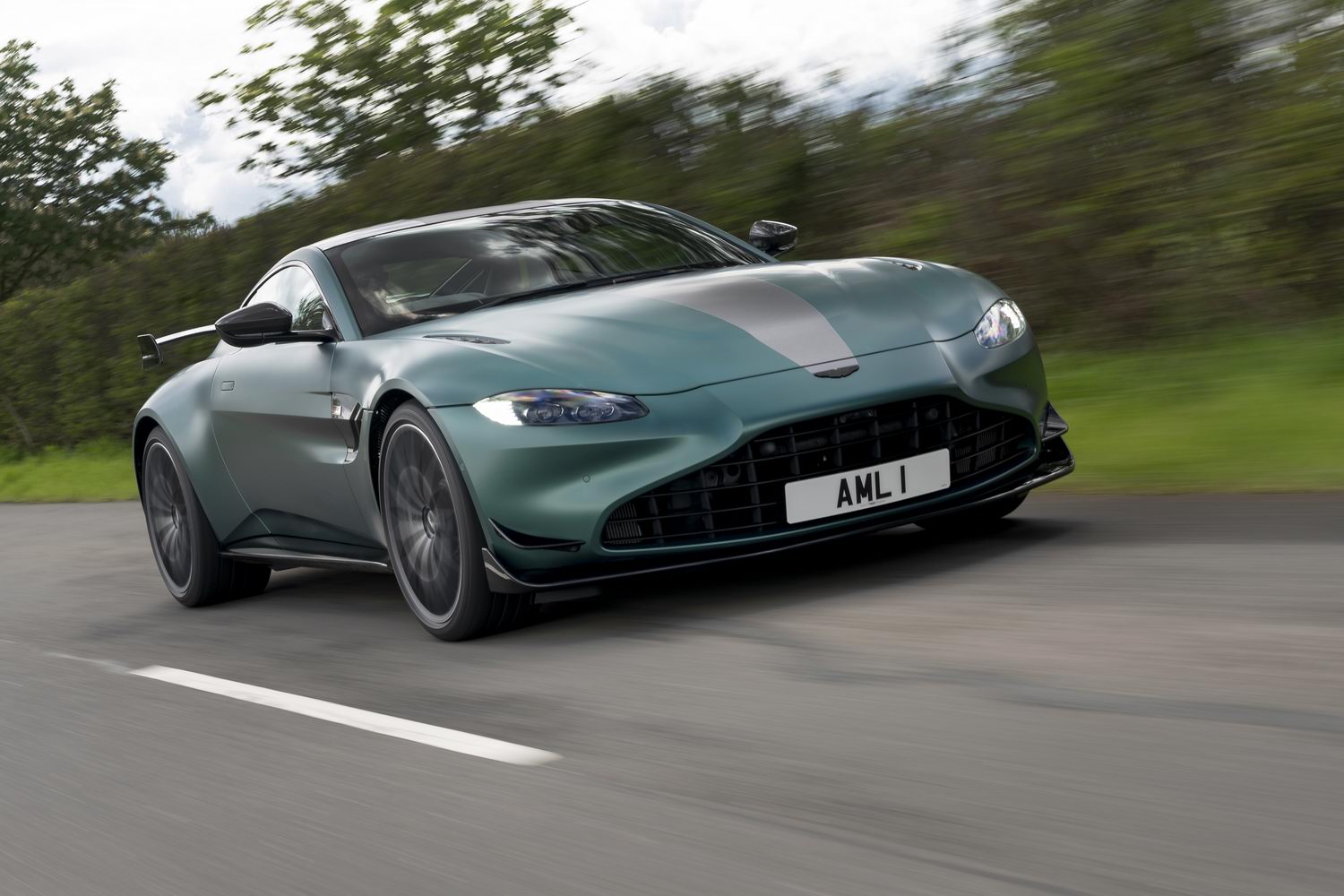 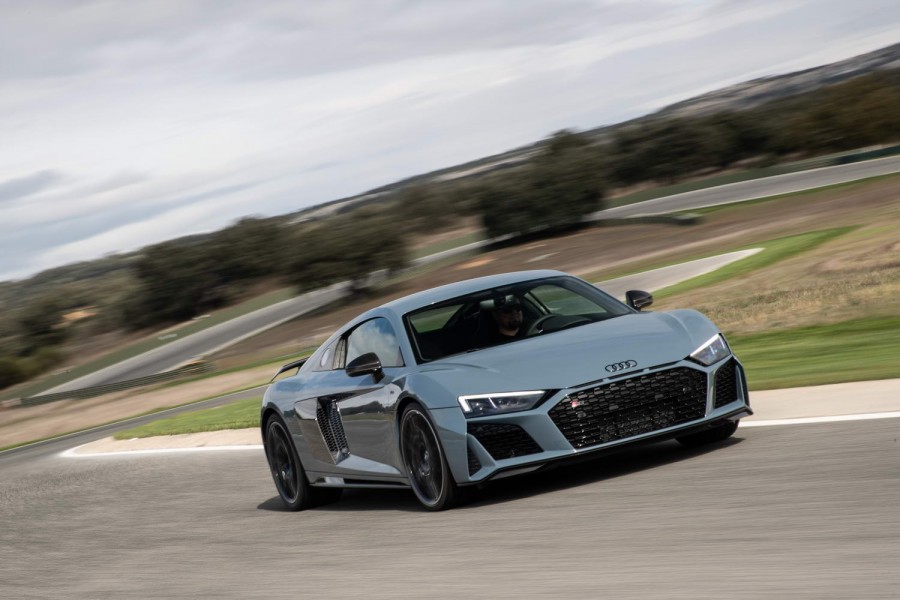 Audi R8 V10 Performance Coupe (2019) review
Audi R8 V10 Performance vs. Porsche 911 GT3 Touring (2021 - 992): the R8 V10 is still an extremely well-developed car, offering a similar feeling to the Porsche of being engineered around a central point. Like the GT3 it's great on the road and that V10 just sounds amazing. 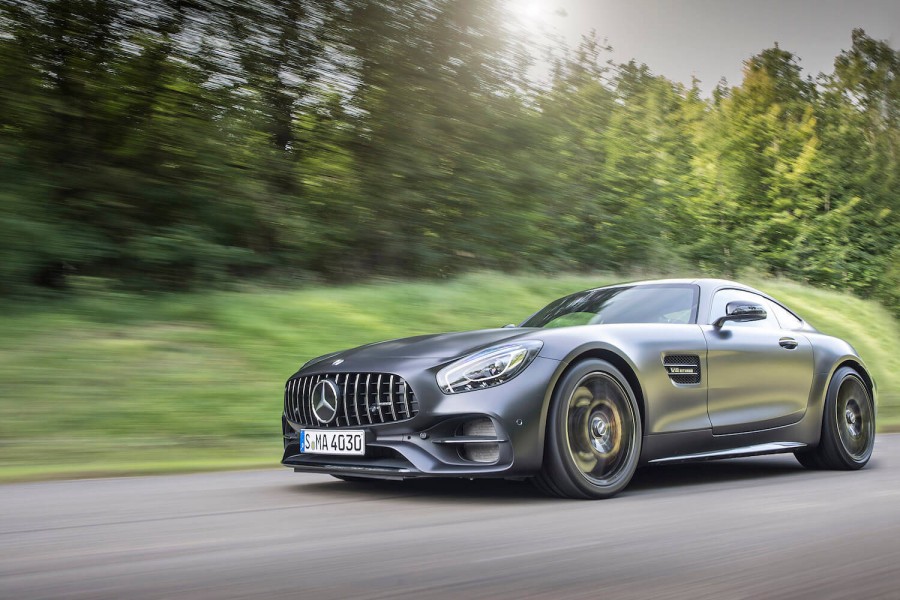 Mercedes-AMG GT C Coupe review
Mercedes-AMG GT C vs. Porsche 911 GT3 Touring (2021 - 992): like the Porsche, the AMG GT is a car designed to take you from road to track and back again without sacrificing too much on comfort on the one hand or lap time on the other. It's a sledgehammer to Porsche's scalpel, but some prefer it that way.